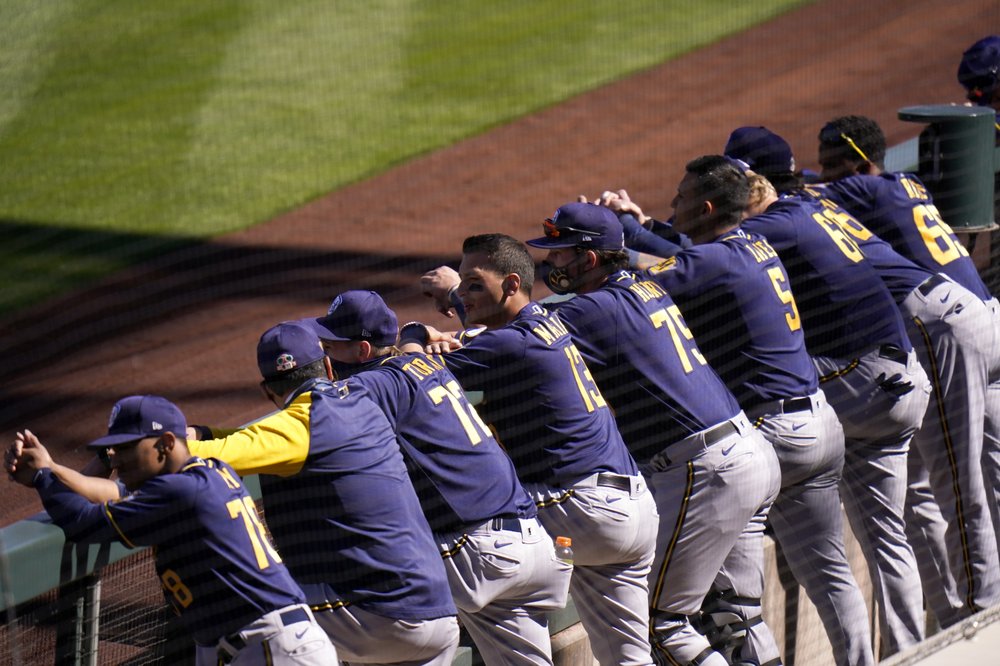 The Milwaukee Brewers’ big trade from the fall of 2019 certainly didn’t work out in the short term.

They’re still hopeful it will help them over the long run.

SCOTTSDALE, Ari. — Manny Pina was 2-for-2 with a two-run home run in the first inning, in leading the Milwaukee Brewers to a 7-1 win over the Arizona Diamondbacks in spring training game Monday.

The Brewers (2-0) used seven pitchers, who all went one inning.

The Brewers acquired infielder Luis Urías and left-handed pitcher Eric Lauer from San Diego in a November 2019 trade that sent outfielder Trent Grisham and pitcher Zach Davies to the Padres. Urías and Lauer struggled in 2020 while Grisham and Davies flourished.

But a new season represents a fresh start for both Urías and Lauer.

The Brewers are giving the 23-year-old Urías a chance to win their starting shortstop job. If Urías (prounounced oo-REE-us) has a solid season as a full-time player, it could lead to some reassessments of a trade that seemed lopsided in San Diego’s favor last fall.

Urías says he isn’t putting any extra pressure on himself to prove the Brewers made the right move in acquiring him. But he understands what’s at stake.

“Obviously I want to prove something, that I can really play,” Urías said Monday from the Brewers’ training camp in Phoenix. “But that’s more for myself, you know? I’m always trying to get better, trying to be a better teammate, a better player and it’s more like a goal for me. I don’t feel a lot of pressure.”

Urías played eight games at shortstop last season but was at third base and second more often. Orlando Arcia has been the Brewers’ regular shortstop the past three seasons.

“You know, I’m confident in knowing Orlando’s abilities at shortstop, so we’re going to take a look at Luis at shortstop this spring because we need to see it,” Brewers manager Craig Counsell said at the start of camp. “So that ends up meaning Orlando is going to see some time at third base this spring. We haven’t made any decisions on how that’s going to play out during the year.”

Urías is simply happy he gets a full spring training to prepare for this season. Last year, Urías underwent surgery on his left wrist in January and spent spring training recovering. He had injured the wrist while playing winter ball.

For much of the preseason summer camp, Urías was in quarantine after testing positive for COVID-19, though he was asymptomatic. Lauer dealt with an injured left shoulder in spring training and was limited in summer camp due to a close contact with someone who had tested positive.

“It was kind of frustrating because last year was my first year coming to the Brewers, and obviously I wanted to make my best impression to the fans and to the team,” Urías said. “But that’s not an excuse.”

Their struggles were notable in a year when the Padres got big contributions from their acquisitions. Grisham was a Gold Glove center fielder with an .808 OPS last season. Davies went 7-4 with a 2.73 ERA before getting sent to the Chicago Cubs last December as part of the trade in which the Padres acquired 2020 NL Cy Young runner-up Yu Darvish.

But there’s still time for Urías and Lauer to make an impact.

“It feels so much better to be back to full health and feeling good and feeling like I can go back out and prove what I was supposed to do last year,” Lauer said. “What I did early in spring last year, before the shoulder stuff happened, I essentially showed what kind of guy I was going to be for the team. That’s who I plan on being this year.”

Urías is taking a similar approach. After enduring so much adversity off the field last year, he’s eager to show what he can do on the field.

“The things that happened in 2020 are not an excuse,” Urías said. “I can do a lot better, and hopefully this year everything comes back to normal and hopefully I’ll be able to do what I can.”

Notes: The Brewers plan to induct former outfielder Carlos Gomez and pitchers Yovani Gallardo and Francisco Rodriguez into the team’s wall of honor. The team also announced that Gomez, who last played in 2019 with the New York Mets, will retire as a member of the Brewers at a ceremony to be announced later. … Pitching prospect Dylan File had elbow surgery last month. He’s expected to miss 3 ½ to four months from the date of Feb. 4 operation.