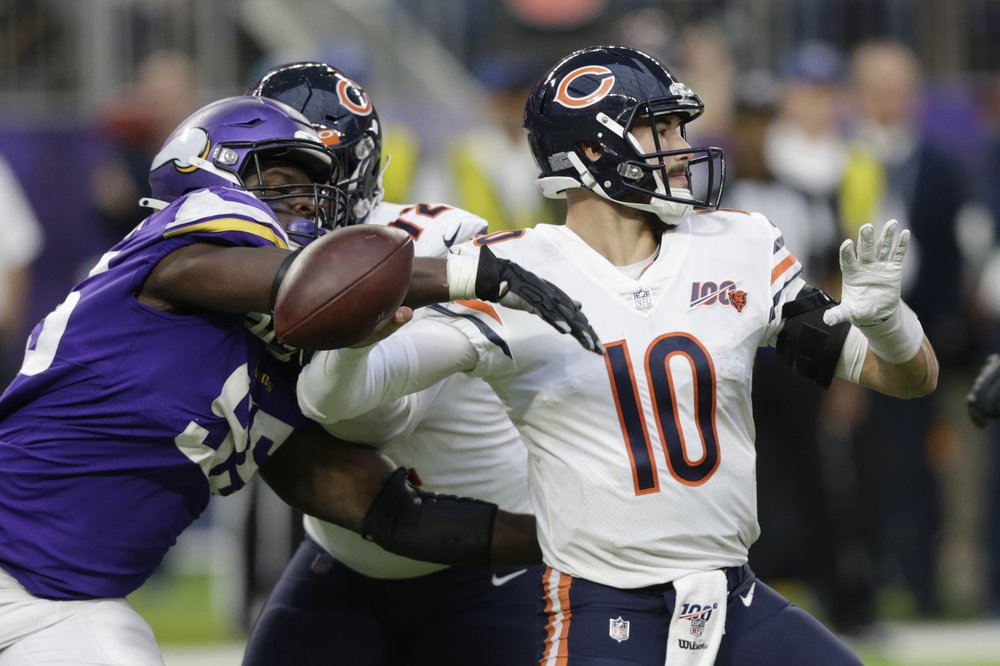 MINNEAPOLIS (AP) — Already sunk by midseason, the Chicago Bears were happy to wrap up a frustrating year with a late-game push for the win.

As far as feeling good for the Minnesota Vikings, body was the easy pick over mind.

Eddy Piñeiro’s fourth field goal of the game came from 22 yards with 10 seconds left, giving the Bears a 21-19 victory on Sunday with the Vikings resting their regulars for the playoffs.

“We’re going to learn from this,” coach Matt Nagy said. “It could have been easy for them to do just that and not be fighters, but they did. That’s the positive.”

Piñeiro, the latest attempt by the Bears (8-8) to solve their persistent kicking trouble, finished the season with 11 straight made field goals. Mitch Trubisky highlighted another unremarkable, conservative performance by hitting Riley Ridley for 34 yards on fourth-and-9 with 2:36 left from midfield to set up the winning kick.

“We just stuck together, believed and put one last drive together,” said Trubisky, who went 26 for 37 for 207 yards. “I think it was important to just go out on the right note.”

David Montgomery had 23 carries for 113 yards and a touchdown to cap a strong rookie season and help the Bears beat the Vikings (10-6) for the fourth consecutive time. Chicago dodged what would have been a fifth losing record in six years, after winning the NFC North in 2018 in Nagy’s debut.

“I’m just happy I ended on a good note, and hopefully get ready to compete next year and win my job back,” Piñeiro said.

Minnesota missed a third 11-win season in six years under coach Mike Zimmer, but he was far more concerned about taking a healthy team to the playoffs.

“It was really hard,” Zimmer said of his decision to sideline the starters. “I actually didn’t tell some of the guys until last night. I wanted them to prepare like they were getting ready to play.”

Ifeadi Odenigbo strip-sacked Trubisky in the fourth quarter to pick up the ball and set up Dan Bailey’s fourth field goal for a brief lead for the Vikings, but a replay review negated what would have been Odenigbo’s second fumble return for a touchdown in three games after it was ruled that his knee was down after the recovery.

“I like to win. Like I told everybody, any time that scoreboard’s up there my name’s attached to it,” Zimmer said. “But I just figured in the long run it’s better if we just play these young guys.”

Mike Boone rushed 17 times for 148 yards and a touchdown for the Vikings, atoning for three costly miscues in the first half. After a 59-yard run on the first play from scrimmage, Boone fumbled a pitch from Sean Mannion that Bilal Nichols recovered. He bobbled a short pass over the middle on the next possession that Kevin Pierre-Louis intercepted. The Bears turned both of those takeaways into field goals.

Then after a punt by Pat O’Donnell was downed at the 1, Boone stutter-stepped in the end zone to try to elude an unblocked Nick Kwiatkoski but was engulfed for a safety that put the Bears up 8-3, ultimately the difference in the game.

Boone, who was held to 28 yards on 11 carries on Monday night in the 23-10 defeat by Green Bay, was again the lead runner with Pro Bowler Dalvin Cook and primary backup Alexander Mattison recovering from injuries.

Tight end Kyle Rudolph (81 games) and defensive end Danielle Hunter (48 games) took the first snap for their side of the ball to extend consecutive regular-season start streaks for the Vikings, but the interior offensive linemen were the only starters who broke a sweat and they were out after three series.

“If something were to happen later in the playoffs, guys will have got a little experience under their belt, and it just gives us more depth,” Boone said.

Montgomery got his second 100-yard rushing game of the season, but otherwise the Bears offense gave the Vikings’ second-stringers little to worry about. For the 11th time this year, they failed to score a first-half touchdown. The Bears finished with an average of 4.66 yards per play this season, ahead of only the New York Jets.

For the fourth straight year, all since U.S. Bank Stadium opened in 2016, the NFL scheduled Chicago’s visit to Minnesota for the final week of the season. The Bears also finished on the road against the Vikings in 2014 (outside at TCF Bank Stadium) and 2011 (inside at the Metrodome), and most of these matchups have come with a exhibition-game vibe.

Bears: Pro Bowl kickoff returner Cordarrelle Patterson entered the concussion protocol after taking a pair of end-around runs as a wide receiver in the first quarter. Then Anthony Miller hurt his shoulder on his first kickoff return.

Vikings: DT Armon Watts and OT Rashod Hill each left in the fourth quarter with an unspecified left leg injury.

Bears: Regroup for 2020, with the offense the top priority for upgrades. They don’t have a first-round draft pick, sent previously to the Raiders for OLB Khalil Mack, but they have an extra second-rounder that came in that trade last year.

Vikings: Play a wild-card round game next weekend at either New Orleans, San Francisco or Seattle, depending on the result of the 49ers-Seahawks game later on Sunday night. The road team won three of the four wild-card games in the playoffs last season and two of four the previous year.