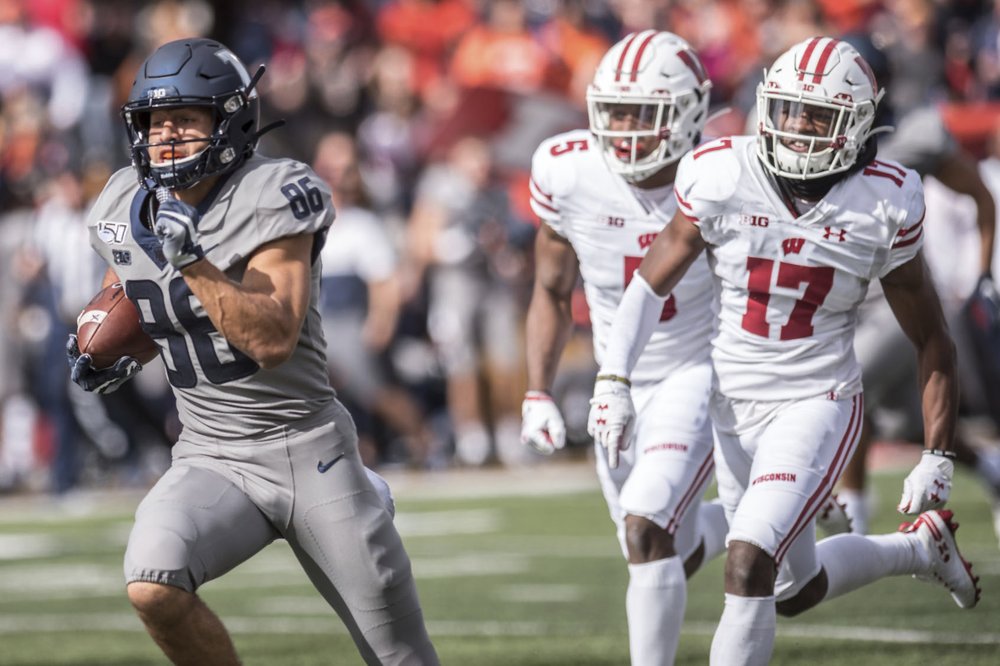 Ohio State edged past Clemson to No. 3 in The Associated Press college football poll and Wisconsin dropped to 13th after being upset ahead of its showdown with the Buckeyes.

The Buckeyes and Tigers both were coming off conference blowouts on the road. Ohio State beat Northwestern 52-3 Friday night. Clemson defeated Louisville 45-10.

Oklahoma remained No. 5, but Penn State moved up to sixth after Wisconsin’s first loss of the season. The Badgers were beaten Saturday by 30-point underdog Illinois in the season’s most significant upset so far.

Florida, Notre Dame, Auburn and Georgia round out the top 10, giving the Southeastern Conference five of the top 10 teams.

Preseason No. 1 teams commonly relinquish the top spot without losing, but the extent of Clemson’s fall is unusual. The last preseason No. 1 to drop as far or farther without a loss or tie was Oklahoma in 1977. The Sooners slipped from first to fifth after opening the season with a 25-23 victory over Vanderbilt. Oklahoma started climbing the very next week and reached No. 1 again before losing its fifth game of the season to Texas in mid-October.

One has to go all the way back to 1971 to find a similar drop to Clemson’s for a preseason No. 1. Notre Dame started that season top ranked and won its first five games, slipping to No. 7 while doing so. Maybe voters’ suspicions of the Irish were justified: Notre Dame lost twice in the second half of the regular season to finish 8-2 and ranked No. 13.

That Notre Dame team seemed to suffer from a schedule perceived to be not so rigorous and one very close victory. None of the Irish’s first five opponents was ranked at the time of the game and Notre Dame beat Purdue 8-7. Those Boilermakers went on to finish 3-7.

Clemson has played just one team that was ranked at game time, then-No. 12 Texas A&M, which has since dropped out of the rankings. And the Tigers had a one-point victory at North Carolina, which is currently 3-4.

No teams are making their season debut in the Top 25 this week, but a couple re-entered.

— No. 25 Wake Forest (6-1) returns after a one-week hiatus. The Demon Deacons bounced back from their first loss of the season last week to beat Florida State on a late field goal.

— Missouri is the latest team to lose its first game after moving into the ranking. The Tigers fell out after getting upset at Vanderbilt.

— Washington is out again after losing a thriller to No. 11 Oregon.

No. 13 Wisconsin at No. 3 Ohio State. Big game lost a lot of luster because of what happened in Champaign, Illinois.

No. 8 Notre Dame at No. 19 Michigan. Wolverines face a top-10 opponent for second straight week.

No. 9 Auburn at No. 2 LSU. SEC West survivor series begins.

TOP PHOTO: Illinois’ Donny Navarro (86) takes the ball in for a touchdown ahead of Wisconsin defenders Rachad Wildgoose (5) and Donte Burton (17) during the first half of an NCAA college football game, Saturday, Oct.19, 2019, in Champaign, Ill. (AP Photo/Holly Hart)