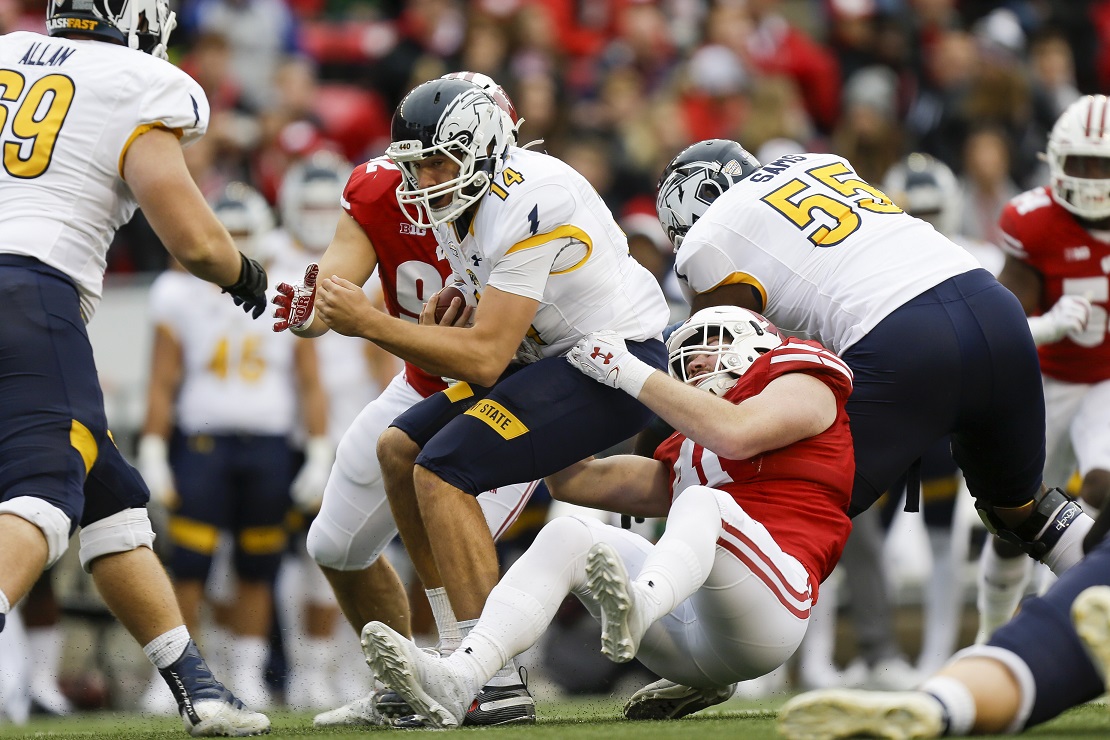 Big Ten defenses turned in three of the season’s top five sack totals over the weekend, with Penn State leading the way with 10 against Purdue.

Wisconsin had nine against Kent State and Michigan had eight against Iowa.

Penn State took down Purdue’s Jack Plummer 10 times, seven in the first half, and finished with its highest number of sacks since 1999 and one shy of the school record.

Defensive ends Toney Shaka (3) and Yetur Gross-Matos (2) combined for half of Penn State’s sacks. Eight players had a hand in at least one.

“I didn’t even know we had 10 sacks until we got into the locker room,” linebacker Jesse Luketa said. “I’m not surprised, though. We call them the ‘Wild Dogs’ for a reason. We let them loose and it was time to hunt. I’m excited for them. A couple weeks ago there was talk about how our front four weren’t as productive as what we wanted, and today they took that to heart and went out and executed.”

Purdue had minus-19 rushing yards, the fewest against Penn State since 1978 and fifth-fewest since 1947.

Wisconsin’s nine sacks were its most since at least 1995, with Zack Baun recording three and fellow linebackers Chris Orr and Jack Sanborn two apiece. The Badgers have 21 sacks, two more than last season’s total.

Michigan’s eight sacks came against an Iowa team that had allowed just six in its first four games. Kwity Paye led the Wolverines with 2.5.

Ohio State is the national team leader in sacks. The Buckeyes had four against Michigan State and have 28 for the season.

Minnesota’s Rodney Smith had the week’s top rushing performance, running 24 times for 211 yards against Illinois. Kenny Gainwell of Memphis had the next-best effort with 209 yards on 14 carries against Louisiana-Monroe. Those were the ninth and 10th 200-yard performances of the season.

A FORCE ON FOURTH

SMU converted a nation-high six of seven fourth downs in its three-overtime win over Tulsa. The Mustangs converted all four in the fourth quarter, including two on the final scoring drive of regulation, and they picked up 15 yards on a fourth-and-3 on their first overtime possession.

San Diego State’s Luq Barcoo intercepted three straight passes in the second half against Colorado State, making him the first Football Bowl Subdivision player since at least 2012 to pick off passes on three consecutive plays.

Barcoo’s three interceptions are the most in a game this season. He has four for the year.

Florida International’s Maurice Alexander had the nation’s longest punt return with his 90-yard runback for a touchdown against Massachusetts. His return was the second-longest in program history behind T.Y. Hilton’s 97-yarder in 2011.

Oklahoma State’s Chuba Hubbard, the first player over 1,000 yards this season, is the top rusher at 182 yards per game. Jonathan Taylor of Wisconsin is second at 149.

Arkansas State’s Omar Bayless is first in receiving, averaging 141 yards. He already has set a career high with 44 receptions in six games, and he’s caught a nation-high 10 TD passes.