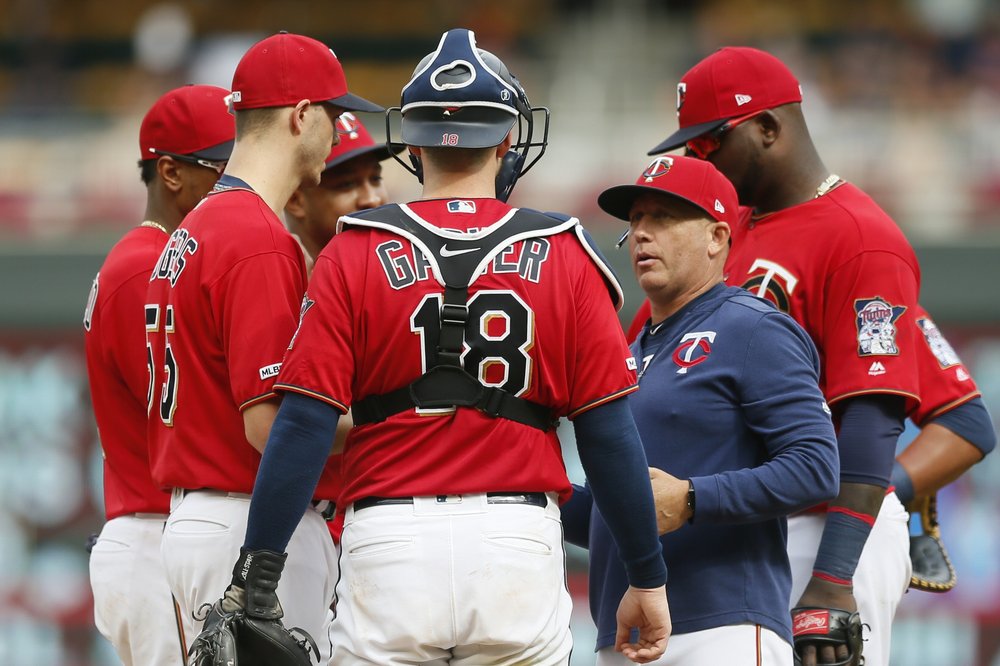 MINNEAPOLIS (AP) — The Minnesota Twins had a lead on the New York Yankees that had dwindled to one run on this late July night, and rookie Lewis Thorpe was in a daunting situation with one out in the sixth inning.

After giving up hits to three of the first four batters he faced, the Twins left-hander had runners at first and second behind him. Yankees slugger Aaron Judge towered in front of him at the plate. Pitching coach Wes Johnson jogged to the mound to deliver a simple message.

“He said, ‘Have some fun,’” Thorpe said, “and I smiled and threw a first-pitch slider.”

Judge swung and grounded into a double play. The Twins went on to beat the Yankees, who they’ll face on Friday in Game 1 of their AL Division Series.

Advising professional athletes is never quite so finger-snap easy, of course. To directly correlate every point of progress by a Twins pitcher this season to the work that Johnson has done in his first year would be disingenuous, ignorant of the dozens of others in the organization who play a part in player development.

This unorthodox decision to hire Johnson from the University of Arkansas, believed to be the first pitching coach to ever jump from college straight to the major leagues, sure has paid off.

“He did his homework on all of us, especially this offseason. He came at us with a plan and a reason and stats to prove it and basically made it really easy to get behind,” said right-hander Tyler Duffey, whose improvement this year has been as drastic as any pitcher on the staff. “He comes at you with a lot of positivity, which I think a lot of times is a good thing, especially if you’re struggling a little bit. I like being told like it is, but every once in a while you need a little pump up.”

The 48-year-old Johnson has brought just that to the AL Central champions, a walking cup of coffee who’s clearly on a mission wherever he’s spotted in the clubhouse during pregame preparations.

“He’s got a tremendous amount of energy, and it’s awesome to see someone else who can match me or challenges me to match them energy-wise,” said right-hander Sergio Romo, the trade-deadline acquisition who will likely be one of only two pitchers on the postseason roster in their 30s. “It’s just been consistent, and that’s one of the things that I respect the most.”

The schedule of games, the environment around the team, and the makeup of players in college is drastically different than in the pros, and a new authority figure with no prior experience in the majors would stand to meet some resistance from established players if the expectations, process or strategy are altered without reason or warning. That’s the polar opposite, though, of how Johnson approaches his teaching.

“I believe it’s our job as a coach, and this is my philosophy, to find what a guy does really well and try to find a way to get him to do that more,” Johnson said, “as opposed to finding what he does bad and exploiting that and telling him he’s got to get better. Whoever you want to look at, they’ve all done things really well to get here at some point in their career. So we tend to focus more on that.”

Starting pitchers Jake Odorizzi and Kyle Gibson had a head start on the relationship, having done winter workouts with pitching specialist Randy Sullivan, who runs elite training camps in Florida he used to conduct in Texas with Johnson.

“He’s really adapted well to a pro-style clubhouse as opposed to a college level,” Odorizzi said. “I never attended college, but the coaches are the rulers in college, but here everybody’s kind of on par together and we’re a team as opposed to them dictating what you need to be doing.”

As the Twins assembled their staff last winter under new manager Rocco Baldelli, chief baseball officer Derek Falvey was intrigued by Johnson, whose background in biomechanics was familiar to him from the offseason conference circuit. Johnson earned a master’s degree in kinesiology while he was on staff at Dallas Baptist University. His college-specific experience made him an unconventional candidate, sure, but pitching is pitching and personality is the key.

“If we’re doing it the same as everyone else, by definition that’s league average,” Falvey said. “If we do things in a league-average way, we shouldn’t expect to be better than league average as a team, so in my mind, we have to be open to new ideas.”

The staff has shown some vulnerability, with a 4.44 post-All-Star-break ERA that’s the second-worst of the eight remaining teams in the playoffs, ahead of only the Yankees, but whether it was Taylor Rogers cementing himself as the closer, Duffey becoming a bulwark of the sixth and seventh innings by going 25 straight games without allowing a run, or Odorizzi being selected as a first-time All-Star, the Twins have unquestionably fielded a stronger pitching staff this year under the guidance of Johnson and assistant pitching coach Jeremy Hefner.

Their 4.18 ERA for the season was ninth-best in the major leagues, the highest rank in the 10-year Target Field era. They were 22nd last season and 29th four times in a six-year span from 2011-16.

The process started soon after Johnson was hired, when he and Hefner toted video clips and PowerPoint slides and flew cross-country to meet their pupils. There weren’t sweeping changes made to workout regimens or curveball grips, just data-based arguments for using different pitches at different times. The work that started last winter has not stopped.

“He is here for his pitchers, and he is here for this team,” Baldelli said, “and he’s completely invested in them.”

TOP PHOTO: In this Aug. 11, 2019 photo, Minnesota Twins pitching coach Wes Johnson, right, holds a meeting on the mound with pitcher Taylor Rogers, left, and catcher Mitch Garver during a baseball game in Minneapolis. Johnson, straight from the college ranks, and a background with biomechanics and an accentuate-the-positive personality, has made a mark on the staff of the American League Central champions. (AP Photo/Jim Mone)