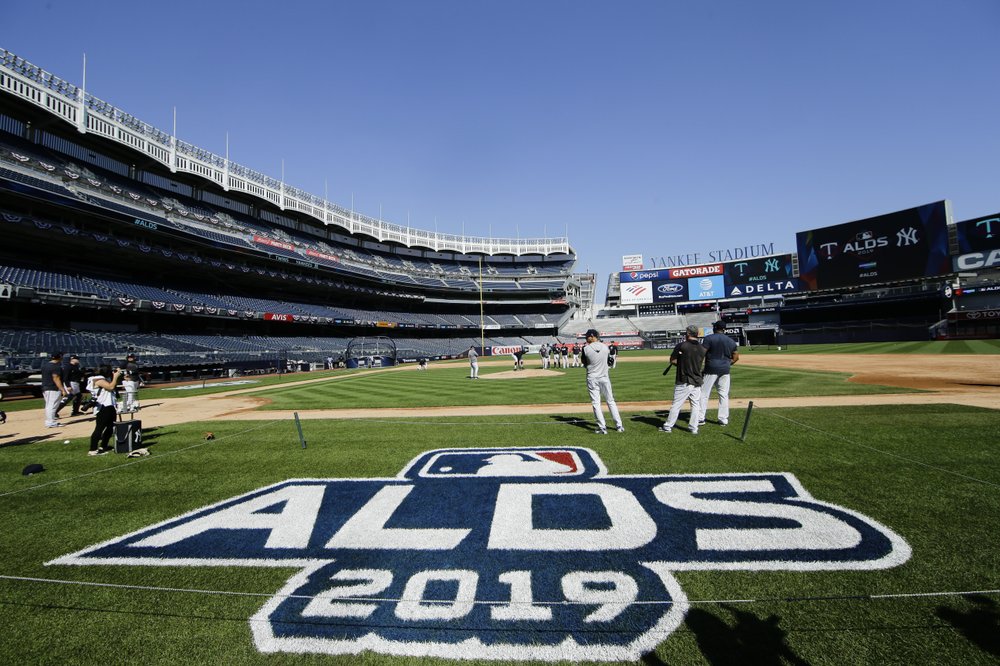 A capsule look at the Twins-Yankees playoff series

A capsule look at the Twins-Yankees playoff series

A look at the best-of-five American League Division Series between the Minnesota Twins and New York Yankees:

Sixth playoff meeting between teams and Yankees have advanced each time with 3-1 ALDS wins in 2003 and 2004, 3-0 ALDS sweeps in 2009 and 2010, and 8-4 victory in 2017 wild-card game after falling behind 3-0. … Since 2002, including the 13-2 postseason record, Yankees are 100-37 against Twins. … Yankees took two of three from Minnesota at home in May and two of three at Target Field in July series that included 20 homers ⁠— 12 by New York. In that series, Yankees outscored Twins just 30-27 but had 48 hits, including 24 for extra bases. The win by New York on July 23, a 14-12 decision in 10 innings, was just the second major league game in last 40 years with blown leads in top of the eighth, bottom of the eighth, top of the ninth and bottom of the ninth. … Polanco, Rosario and Kepler were only Twins starters in lineup for 2017 wild-card game expected to factor in this series. … Minnesota rookie skipper Rocco Baldelli will be managing his first postseason game, after replacing 2017 AL Manager of the Year Paul Molitor following last season. … Cave and Littell are former Yankees farmhands. Cave arrived in 2018 trade for minor leaguer Luis Gil, and Littell was acquired in 2017 deal for pitcher Jaime Garcia. … Minnesota set major league record with 307 homers, one more than Yankees and both well above previous mark of 267 established by New York last year. Twins had six players with 25 or more homers; Yankees had five. Minnesota had 11 in double digits; Yankees a record 14. … Minnesota has lost seven straight postseason rounds since beating Oakland in 2002 Division Series. … Several Yankees are slumping, creating uncertain roster and lineup decisions for manager Aaron Boone. 1B Luke Voit struggled in return from sports hernia, ending season 0 for 12 and 1 for 33. Gregorius hit .163 with 3 homers and 17 RBIs from Aug. 24 on. Urshela finished in 3-for-28 slide and sprained left ankle in regular-season finale. … New York’s pitching was weakened when reliever Dellin Betances tore Achilles tendon in first appearance back from lat injury that had sidelined him since spring training, and 18-game winner Domingo Germán was placed on administrative leave under baseball’s domestic violence policy. … Chapman had 0.59 ERA from Aug. 3 through end of season, allowing one run in 16 appearances. … Yankees had baseball’s second-highest payroll, at $225 million as of Aug. 31. Twins were 18th at $125 million, with only Oakland and Tampa Bay lower among the 10 playoff teams.

Twins: Went 101-61 to win AL Central for first time since 2010, when Target Field opened. So this marks only second time in 10 seasons ballpark will host playoff baseball. … Baldelli, his staff and many of the players have little or no experience with New York’s one-sided domination of Twins this century, especially in postseason. They’ve expressed plenty of confidence about playing in lively atmosphere at Yankee Stadium. Twins had a best-in-majors 55-26 record on road this season, and their 939 runs were second only to Yankees (943). … Cruz provided big boost in clubhouse with leadership and experience, not to mention heart of batting order with 40-homer season at age 39. There’s probably no tougher out in the lineup right now than Cruz, who has been able to play with a ruptured tendon in his wrist that landed him on the injured list twice. … Twins didn’t only lean on the long ball to score. They were second in majors in hits, and fourth in doubles. Without injured center fielder Byron Buxton, though, this is not a speedy team. Their 28 steals were by far the fewest in majors. … The defense, minus Buxton, is a potential concern. Twins tied for fourth-most errors (111) in majors. One way they covered up some deficiencies was by shifting on 35.6% of plate appearances, seventh-most in majors. … The bullpen, team’s biggest question mark entering the season, became reliable asset down the stretch. Duffey had a 25-game scoreless streak from July 28 to Sept. 22, highlighting his breakout season. Rogers thrived in first year as closer, posting 8.18 strikeout-to-walk ratio that was second-best among relievers with more than 25 innings. Romo’s acquisition at trade deadline was important, giving Twins another player besides Cruz with World Series experience. Twins pitchers ranked 14th in majors in strikeouts per nine innings after finishing second-worst just two seasons ago.

Yankees: Despite a cavalcade of significant injuries, New York (103-59) finished with its best record since 2009, last time Yankees won World Series. Bronx Bombers took first AL East crown since 2012. … Stanton strained left biceps on March 31 in his third game, strained a shoulder and calf during his rehabilitation, returned June 18, then strained the posterior cruciate ligament in his right knee in his sixth game back. He returned Sept. 18 and went 8 for 25 with two homers in nine games. … Judge strained left oblique on April 20 and didn’t return until June 21. He did not pull a home run to left field until Aug. 20, starting a stretch in which he hit .288 with 15 homers and 22 RBIs in his last 33 games. … Gregorius tore UCL in right elbow during last year’s Division Series and did not make season debut until June 7. … Sánchez was sidelined from April 10-24 by strained left calf, then strained his left groin on stolen base attempt Sept. 12 and did not return until final weekend of season. … CF Aaron Hicks’ season ended when he injured flexor near right elbow Aug. 3, causing Gardner to be shifted from left to center, a position he manned from the start of the season until Hicks returned in mid-May from a spring training back injury. … Gardner set career highs for home runs and RBIs, as did LeMahieu. … Britton and Ottavino both had control issues at times. Britton walked 32, up from 21 last year and his highest total since 2012. Ottavino, with a huge break on his slider that is sometimes hard to locate, walked a career-high 40. … Happ will begin the series in the bullpen but could be an option to start Game 4, if necessary.

⁠— Bullpen Games. The loss of former Yankees starter Michael Pineda to suspension for a banned diuretic was a big hit to Twins rotation. They also watched Gibson struggle down the stretch after a yearlong fight with ulcerative colitis, and Perez regress with a 6.27 ERA and 16 homers allowed in 14 starts after the All-Star break. Dobnak, who was pitching in an independent league two summers ago and was selected the organization’s minor league player of the year after an unexpectedly rapid rise through the system, would be a strong candidate to serve as an opener. There is a stack of hard-throwing righties ready for Baldelli to run out against the Yankees and their right-handed-heavy lineup. On the other side, Green could be used as an opener in Game 4 to fill a hole in New York’s thin rotation.

⁠— Health Care. Though the Twins didn’t lose as many games to injuries as the massive number weathered by New York, they did endure plenty of their own setbacks this year, beginning with Buxton’s absence. The status of Kepler, who started only two of the last 19 games because of shoulder soreness, was still not certain when the week began. Arraez, the rookie who provided a huge boost to an injury-depleted lineup with his versatility in the field and well-beyond-his-years presence at the plate, was an even bigger question mark for the start of the series after spraining his ankle in the penultimate game of the regular season.

⁠— Short Leash. Boone has said Yankees will be more likely than in past to pull starting pitchers before they face batting order for third time.

⁠— Better Defense. Sánchez cut his passed balls from 18 to seven this season and wild pitches allowed from 45 to 30.

0
0   0
previous Chiefs quarterback Mahomes has plenty of fans within NFL
next UW-Platteville goes on 31-0 run in defeating No. 16 UW-La Crosse
Related Posts