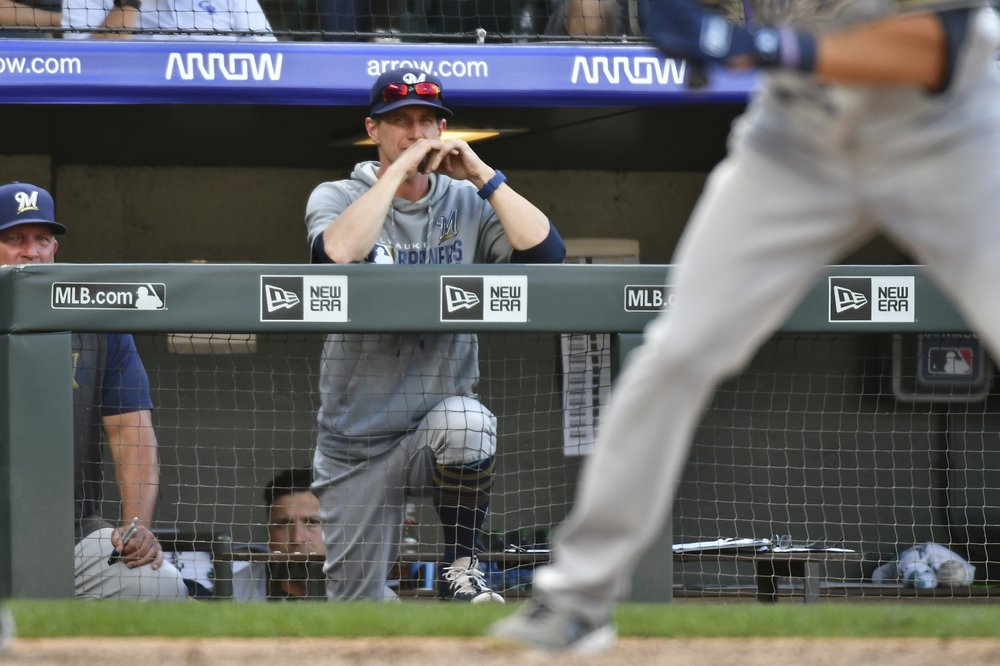 Brewers wind up with NL wild card, lose to Rockies in 13

Brewers wind up with NL wild card, lose to Rockies in 13

DENVER (AP) — By the late innings, the Milwaukee Brewers just wanted the game to end.

That took a while, though.

Already relegated to an NL wild-card spot, the Brewers lost to the Colorado Rockies 4-3 Sunday when Jake Faria threw a wild pitch in the 13th inning that allowed the winning run to score.

“It got to a point where it was irrelevant today,” Brewers manager Craig Counsell said. “So it was finish the game.”

The Brewers will play at Washington on Tuesday night in the wild-card game. The winner advances to take on the NL West champion Los Angeles Dodgers.

A day after closer Josh Hader gave up a tying home run in the ninth inning and the Brewers lost in the 10th, Milwaukee began the day one game behind St. Louis for the NL Central lead.

St. Louis took a big lead early, and the Brewers began freely substituting as the Cardinals finished off a 9-0 win over the Cubs.

“It’s easy to look forward because we got a huge game and a fun game. I think it started really when the Cubs game got finalized. That’s when it starts,” Counsell said.

“You kind of saw once they got a big early lead, we started taking some guys out. So it impacted decisions, for sure,” he said.

Counsell declined to say who would start for the matchup against Max Scherzer and the Nationals.

“We’ll have an announcement but not right now,” he said.

Yasmani Grandal hit a two-run homer for Milwaukee and Hernan Perez had a pinch-hit homer. Milwaukee finished the regular season at 89-73, down from going 96-67 last year and winning the NL Central.

Dom Nunez homered for Colorado, which again scored the tying run in the ninth and swept the three-game series.

Faria (0-1) walked Sam Hilliard to start the Rockies 13th and Yonathan Daza then laid down a bunt single. Second baseman Keston Hiura collided with first base umpire Brian Gorman as he rushed to cover the bag, and catcher Manny Pina’s throw sailed down the line, allowing Hilliard to reach third.

With pinch-hitter Ian Desmond at the plate, Faria threw a pitch into the dirt that skipped past Pina, letting Hilliard to score.

Bryan Shaw (3-2) picked up the win with a scoreless inning.

Milwaukee loaded the bases with none out in the 11th but failed to score, with Ben Gamel thrown out at the plate trying to score on a pitch in the dirt that rolled past the catcher but was quickly retrieved. DJ Johnson then struck out Pina and Perez.

Colorado loaded the bases with one-out after pinch-hitter Yonder Alonso was intentionally walked, but reliever Taylor Williams then fanned Nunez and Garrett Hampson to send the game to extra innings.

Josh Fuentes singled in the seventh to drive in the first run for the Rockies, who finished the season 71-91.

It was a sharp stumble from the previous season when they went 91-72, dropping an Oct. 1 tiebreaker to Los Angeles but advancing to the NL playoffs as a wild card for the second straight year.

All-Star outfielder Charlie Blackmon, who sat out the final game, said the Rockies’ losing season was tough to take after reaching the playoffs the previous two years.

“I think it’s good sometimes to remember how it feels to not have success,” he said. “That can push you to find ways to get better and work hard. Sometimes getting beat makes winning that much more special.”

Brewers: CF Lorenzo Cain remains day to day after spraining his left ankle in a slide at home plate during Saturday’s loss. “He actually walked in (Sunday) better than he walked out (Saturday night) which with a sprained ankle is somewhat encouraging, but he’s sore,” manager Craig Counsell said. “I think we’re somewhat encouraged but it’s pretty early and he just started treatment, so don’t really have definitive news as to what’s happening.”

Counsell was more optimistic about OF Ryan Braun, who left Friday’s game at Colorado with a left calf strain. He said Braun is expected to be available in time for their first postseason game.