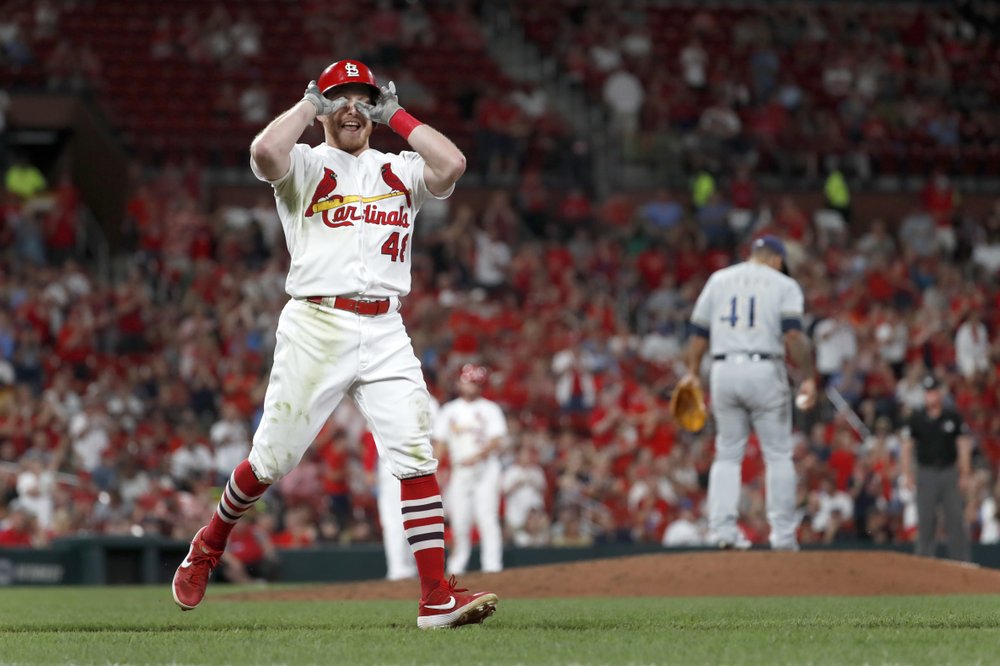 ST. LOUIS (AP) — Dexter Fowler hit a bases-loaded double and drove in four runs, leading the St. Louis Cardinals past the Milwaukee Brewers 9-4 on Tuesday night in the second game of the series between NL Central contenders.

Tyler Webb (1-1) earned his first major-league victory with one-third inning of work in his 79th career game. He struck out pitch-hitter Ben Gamel.

The Cardinals have won nine of their last 11 games, while the Brewers have lost six of their last eight. St. Louis remained in first place by a half-game over the Chicago Cubs, who beat San Francisco 5-3. Third-place Milwaukee is four games back.

St. Louis broke the game open with a four-run sixth against three Milwaukee relievers. Jeremy Jeffress (3-4) loaded the bases. Alex Claudio came in and struck out Kolten Wong. Junior Guerra entered and walked Harrison Bader, who was recalled earlier in the day. After striking out pinch-hitter Matt Carpenter, Fowler hit a 3-2 pitch into short left field that fell between three Brewers for a double and a 5-2 lead.

Milwaukee went ahead 2-1 in the sixth. A two-out, run-scoring single by Eric Thames off reliever John Gant was charged to rookie Ryan Helsley, who pitched 1 1/3 innings. Gant allowed back-to-back singles by Hernan Perez and Orlando Arcia for the second run before giving way to Webb.

Yadier Molina drove in the Cardinals’ first run, scoring Marcell Ozuna in the fourth. St. Louis then loaded the bases with two outs. Lane Thomas hit for starter Michael Wacha but flew out to center.

Wacha struck out five, allowing three hits and a walk in throwing 73 pitches.

Milwaukee scored its final two runs in the eighth.

Six Milwaukee pitchers combined for nine walks. It was the most walks the Cardinals, who stranded 10 runners, have received in a game this season.

LOOK WHAT I GOT

Bader displayed his signature defensive skills. The speedy Bader ran in from deep center, dove and caught a sinking fly hit by Keston Hura just above the ground before landing hard in the sixth inning. Bader held up his glove the whole time to show he had the ball.

To make room for Bader, up from Triple-A Memphis, the Cardinals optioned rookie outfielder Randy Arozarena, 25, to the Redbirds. Bader, who appeared in 90 games with the Cardinals to begin the season, was batting .317 with seven home runs and 15 RBI in 16 games with Memphis. He was batting .195 with six home runs and 19 RBI at the time of his option. Arozarena had two hits in eight at-bats in his week with the Cardinals. He is batting a combined .349 with 10 homers and 42 RBIs in 80 games with Memphis and Double-A Springfield this season.

Brewers: OF Lorenzo Cain was back in the lineup. He did pinch-hit Monday and struck out. He sat out Milwaukee’s Saturday and Sunday games in Washington. He tweaked his oblique in Friday’s game against the Nationals.

Brewers: Adrian Houser (5-5, 3.76) Houser is 0-1 with a 6.43 ERA in three career games against St. Louis. His April 22 start this season in St. Louis resulted in a 13-5 in which Houser went four innings, allowing five runs on nine hits, including two home runs.