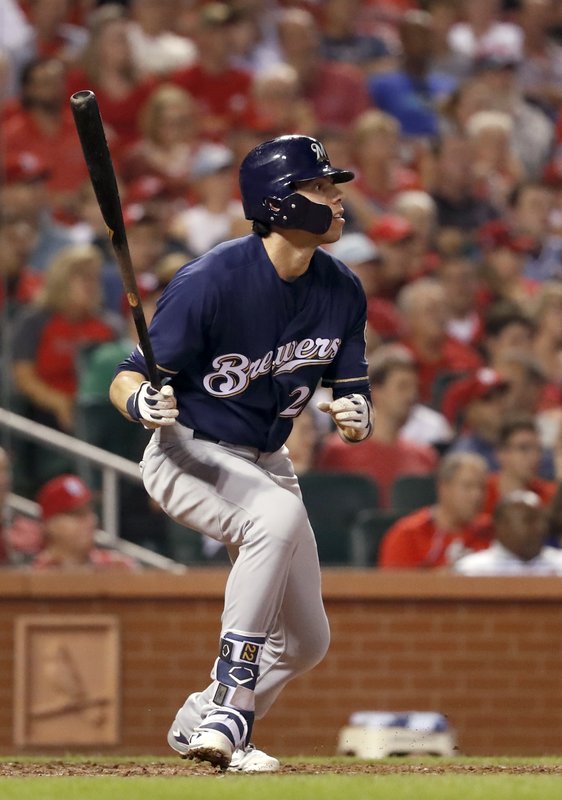 HOLY YELICH. Can you say MVP?

HOLY YELICH. Can you say MVP?

ST. LOUIS (AP) — Christian Yelich homered and drove in six runs, and the surging Milwaukee Brewers hurt St. Louis’ playoff chances with a 12-4 victory over the Cardinals on Tuesday night.

Ryan Braun went deep twice and Jesus Aguilar also connected as Milwaukee won for the fifth time in six games. Manny Pina had two hits and drove in a run, and pitcher Gio Gonzalez contributed an RBI single for just his fourth hit of the season.

The Cardinals (87-71) fell into a tie with Colorado, which beat Philadelphia 10-3, for the second NL wild card. Milwaukee (91-67) leads St. Louis and Colorado by four games for the top wild card and entered the day 1½ games back of the NL Central-leading Chicago Cubs.

Following Wednesday’s series finale, Milwaukee closes the regular season with a weekend set at home against lowly Detroit. St. Louis also is off Thursday before beginning a three-game series against the slumping Cubs at Wrigley Field.

Yadier Molina hit a three-run homer off Gonzalez for the Cardinals, who had won six of seven before their 6-4 loss to Milwaukee on Monday night. Marcell Ozuna went 3 for 3 with a walk.

St. Louis left the bases loaded in the fifth and seventh innings when Jedd Gyorko came up empty each time. Third baseman Mike Moustakas turned an inning-ending double play on Gyorko’s chopper near the bag in the fifth, and Gyorko flied to right for the final out of the seventh.

Milwaukee scored each of its first six runs with two outs. Aguilar and Braun hit back-to-back homers in the first off rookie Austin Gomber (6-2), and Gonzalez chased the left-hander with his hit in the fourth.

The Brewers went on to load the bases against Tyson Ross, and Yelich’s liner to right-center rolled all the way to the wall for a triple and a 6-0 lead. He also hit a three-run drive in the ninth.

Cardinals first baseman Matt Carpenter and manager Mike Shildt were ejected in the seventh inning. Carpenter became upset with home plate umpire Will Little after he was called out on strikes.

Brewers: Manager Craig Counsell said All-Star RHP Jeremy Jeffress (neck spasms) was feeling a lot better after he was unavailable for the series opener. Counsell said Jeffress was going to play catch before they made a decision on his status Tuesday night.

Cardinals: 2B Kolten Wong returned to the starting lineup for the first time since he left Friday’s victory over San Francisco with cramps in both hamstrings. He struck out swinging as a pinch hitter in the ninth inning of Monday’s loss. “Obviously at this point of the season no one’s 100 percent,” he said. “For me as long as I know I can run and I can play I’m going to be out there.”