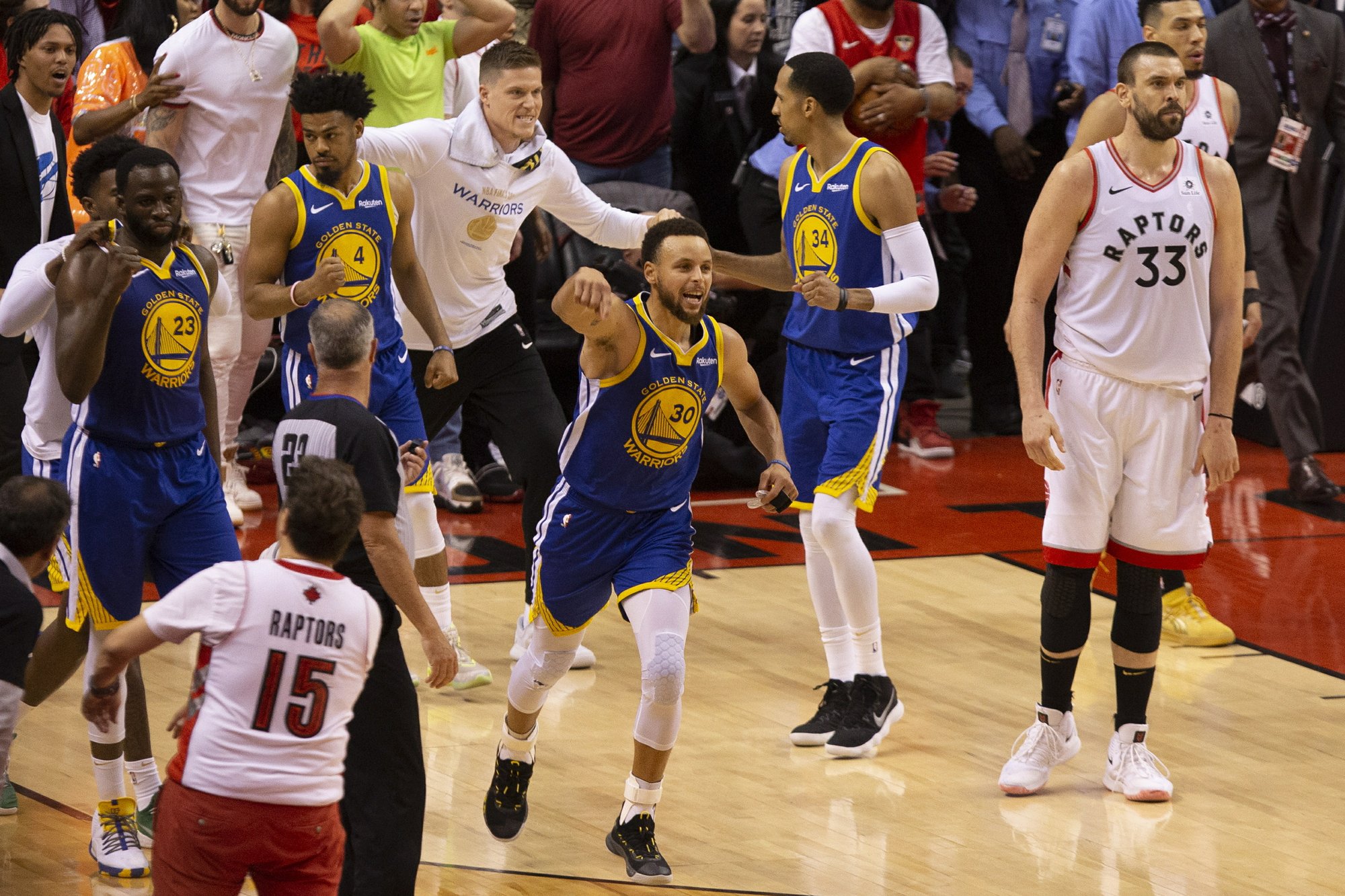 With Stephen Curry and Klay Thompson shooting and Draymond Green swatting, the champions found a way to win even after a gut-wrenching loss.

Curry scored 31 points, Thompson added 26 and they led a season-saving surge long after Kevin Durant was injured again to give the Warriors a 106-105 victory over the Toronto Raptors on Monday night in Game 5 of the NBA Finals.

Devastated by the loss of Durant, the All-Stars that the Warriors had left made sure there was celebration along with their sadness, pulling out what Green thought had to be the greatest win during their run to five straight NBA Finals.

“When you’re down six with a couple minutes to go in an elimination for these guys to win a championship, we could have thrown in the towel. We could have folded, but we didn’t,” Green said. “I said it before: I’ve never seen this group fold. And that stands true still.”

Curry and Thompson, nicknamed the Splash Brothers, combined for three straight 3-pointers in the closing minutes after Toronto had taken a six-point lead with under 3½ minutes remaining in front of a raucous, red-shirted crowd.

“Even going down six with three minutes left, their ball, we didn’t panic,” Thompson said. “We just do what we do.”

The Warriors lost Durant barely a quarter after getting him back but got the win, cutting Toronto’s lead to 3-2 and sending the series back to Oracle Arena for Game 6 on Thursday.

Kawhi Leonard scored 26 points for the Raptors but couldn’t get the final shot, which went to Kyle Lowry and was blocked by Green.

The two-time defending champion Warriors were minutes away from their title reign ending, having lost Durant and a 14-point lead during an emotionally exhausting game. They had controlled Leonard for three quarters, but he scored 10 straight Toronto points in the fourth and the Raptors were close to their first championship and a party that would have stretched coast to coast in Canada.

But even after everything the Warriors had lost, they still had two of the best perimeter shooters in the world on the floor. Thompson hit a 3, and Curry followed with one to tie it at 103. Golden State got it back to Thompson and the Raptors lost sight of him just long enough for the tiebreaking shot with 57 seconds to go.

Toronto cut it to one when Kyle Lowry was credited with a basket and the Raptors got a final chance when DeMarcus Cousins was called for an illegal screen. Leonard had the ball but the Warriors forced him to pass and it ended up in the corner to Lowry, but Green sprinted over to get a hand on his shot as the buzzer sounded.

Cousins had 14 points for the Warriors and Green finished with 10 points, 10 rebounds and eight assists.

Golden State is the only team to lose a 3-1 lead in the NBA Finals, when Cleveland came back to win in 2016.

Now the Warriors have a chance to pull off the feat themselves, but it became more difficult after Durant limped off in the second quarter after he had missed the previous nine games with a strained right calf.

“We understand the moment and I think we can rally, considering how the second half went tonight,” Curry said.

Durant, the two-time NBA Finals MVP, was attempting to dribble past Serge Ibaka early in the second quarter when he suddenly came to a stop, lost the ball and limped sideways before grabbing at his lower right calf as he fell to the court.

Fans at first cheered but then, spurred in part by some Raptors players, chanted “KD! KD!” as he was helped to the locker room area joined by Curry, Andre Iguodala and general manager Bob Myers.

Durant left the arena on crutches with what a tearful Myers said was an Achilles tendon injury and the Warriors said he would get an MRI on Tuesday.

They were initially OK without him because Cousins — who returned from injury himself in this series — came off the bench to score their next seven points before feeding Green for a layup that gave them a 48-37 lead. It got as high as 13 on Curry’s four-point play, and Golden State led 62-56 at halftime.

But eventually it would come down to Curry and Thompson, who both logged more than 41 minutes and will have to be ready to go again Thursday in what will be the final game in Oracle Arena.

Lowry had 18 points and Marc Gasol scored 17 for the Raptors, who were trying to give Canada its first championship in one of the traditional major sports since the Blue Jays won the World Series in 1993.

Fans had been waiting through on-and-off rain all day — some since Sunday — to watch at one of the outdoor watch parties that have popped up in and around Toronto. The crowd inside the arena that included hockey Hall of Famer Wayne Gretzky and former Raptors star Vince Carter thought it would witness history as Leonard powered past his defenders repeatedly in the fourth quarter.

But the Raptors needed one more basket, and the only way the local fans can see them win in person is if it goes the full seven games and Toronto wins it at home on Sunday.

“We had a chance to win a championship tonight and we didn’t do it,” guard Fred VanVleet said. “We didn’t play well enough, we didn’t execute enough down the stretch and that stings a little bit.”

Warriors: Golden State also lost Kevon Looney again after he aggravated his injury to upper body cartilage. … Durant finished with 11 points. He came in averaging 31.7 points per game in the NBA Finals, trailing only Rick Barry and Michael Jordan on the career list.