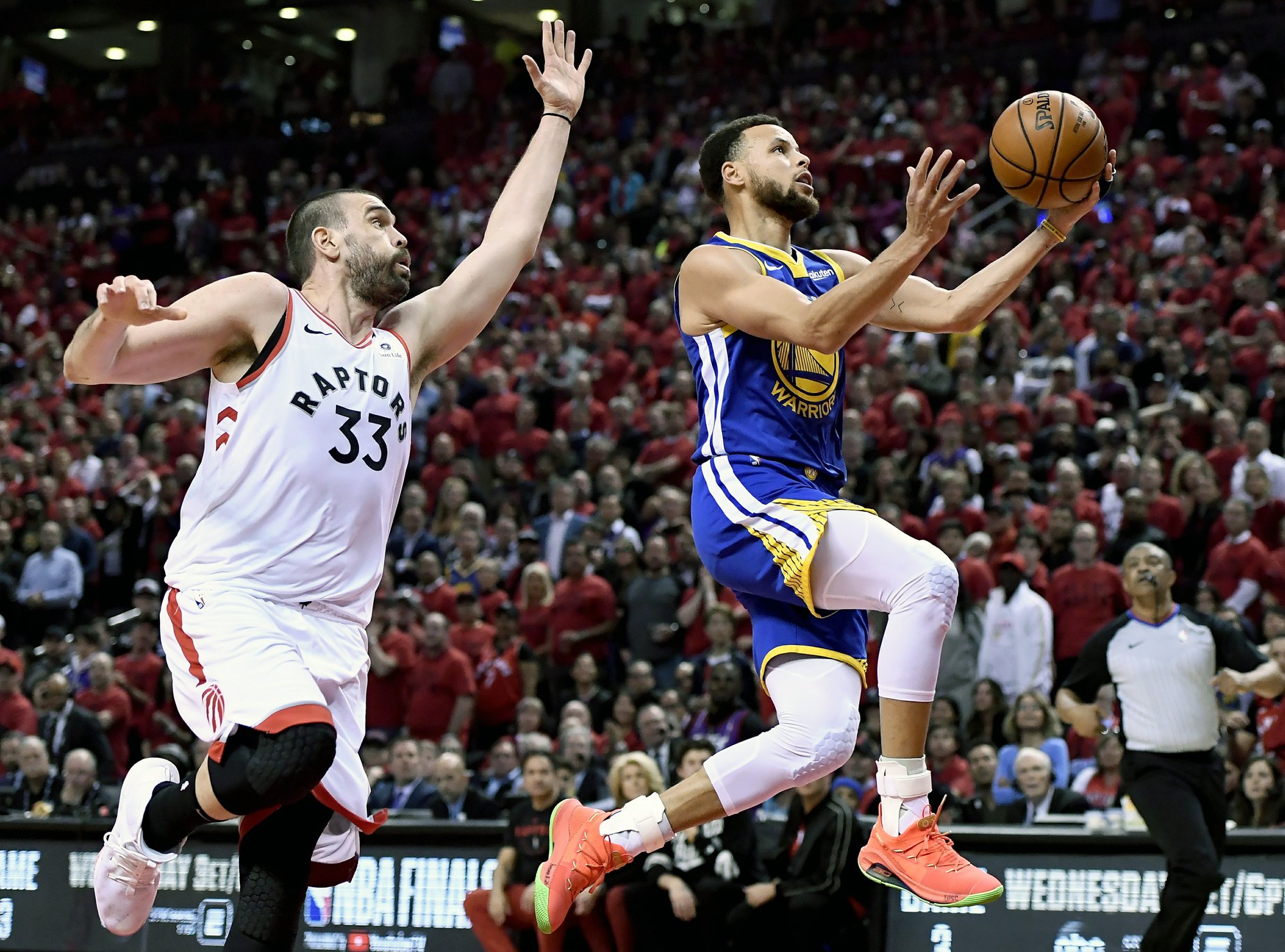 TORONTO (AP) — The Golden State Warriors relied on a champion’s heart to overcome their weary bodies.

Klay Thompson scored 25 points before leaving with a hamstring injury, Stephen Curry had 23 and the Warriors ran off the first 18 points of the second half on the way to a 109-104 victory over the Toronto Raptors on Sunday night that tied the NBA Finals at one game apiece.

With Kevin Durant already out and Thompson eventually joining him in the fourth quarter, the Warriors don’t feel great — but they would’ve felt a whole lot worse flying home in a 2-0 hole.

“When you get to this stage, our DNA shows up,” Curry said.

Andre Iguodala, himself slow to get up after a hard fall in the first half, made the clinching 3-pointer with 5.9 seconds left after the Raptors scored 10 straight points to cut it to 106-104.

Kawhi Leonard had 34 points and 14 rebounds for the Raptors. They had won five straight since falling behind 2-0 in the Eastern Conference finals.

Curry appeared to be laboring as well in the first half, returning to the locker room in the midst of six straight misses to start the game.

But the Warriors cobbled together a good enough finish to the second quarter to keep it close, then stormed out of the locker room with one of their vintage third-quarter charges that have been so frequent during their run to five straight NBA Finals.

“Third quarter we didn’t play well enough. We missed too many shots,” Raptors guard Kyle Lowry said. “They got out in transition and got a little confidence going. We lost the game there.”

The series moves to their Oracle Arena for Games 3 and 4, with the first NBA Finals to be played outside the U.S. assured of returning to Canada for Game 5.

The Warriors will hope to have enough healthy bodies to get through it. Thompson landed awkwardly after a 3-point attempt early in the fourth quarter and limped off soon after, with backup center Kevon Looney already missing the second half with a chest injury.

And Golden State is still without Durant, who missed his seventh straight game with a strained right calf but hopes to return during the series.

For now, they got key contributions from Quinn Cook, who hit three 3-pointers, and veteran center Andrew Bogut, who wasn’t even part of the roster most of the season but came off the bench for three baskets.

“It was a great win. We got to go home and protect our home floor and we’ll see about all the injuries,” coach Steve Kerr said. “But I’m very proud of our team and in particular all the guys off the bench.”

Fred VanVleet scored 17 points for the Raptors, who had red T-shirts with their slogan “We The North” hanging on seats around the arena.

The Warriors sure were seeing red, especially Curry, during a mostly miserable first half when they missed 20 of their first 28 shots.

He hung his head and didn’t even attempt to run back when VanVleet stole the ball from him and made a layup to give Toronto an 11-point lead with a little more than 2 minutes remaining in the half.

But Curry made two free throws for the final points of the half to cut it to 59-54, then the Warriors came back and pitched a shutout until nearly the midpoint of the third quarter during a series-changing — perhaps season-changing — swing.

Iguodala had five quick points including a 3-pointer that moved Golden State into the lead at 61-59. The surge continued with three straight baskets from Thompson and three more from Green, whose last one capped it and made it 72-59 before Toronto finally got on the board with a 3-pointer with VanVleet with 6:20 remaining in the period.

“They moved the ball really well and were running freely,” Raptors center Marc Gasol said. “Once they run freely, everything opens up for them.”

The Warriors had won 12 straight Game 1s and this was their first time playing from behind in the finals since they were down 2-1 to Cleveland in 2015. They showed no signs of concern during the off days, and Thompson suggested part of the problem during their 118-109 loss Thursday was rust after they had nine days off in between series.

Their bigger problem early in Game 2 was the defense of the Raptors. But Toronto — which had a 23-0 advantage in second-chance points — missed a chance to take a comfortable lead into the half and couldn’t overcome its 37 percent shooting, with Pascal Siakam going 5 for 18 for 12 points after scoring 32 in the opener.

Raptors: Siakam missed his first three shots, as many as he missed in Game 1 while going 14 for 17. … OG Anunoby was active for the first time in the playoffs after having an emergency appendectomy April 11, but didn’t play.

President Barack Obama sat next to NBA Commissioner Adam Silver across the court from the Toronto bench, getting a loud ovation and “MVP! MVP!” chants when shown on the overhead video screen and introduced in the second quarter.