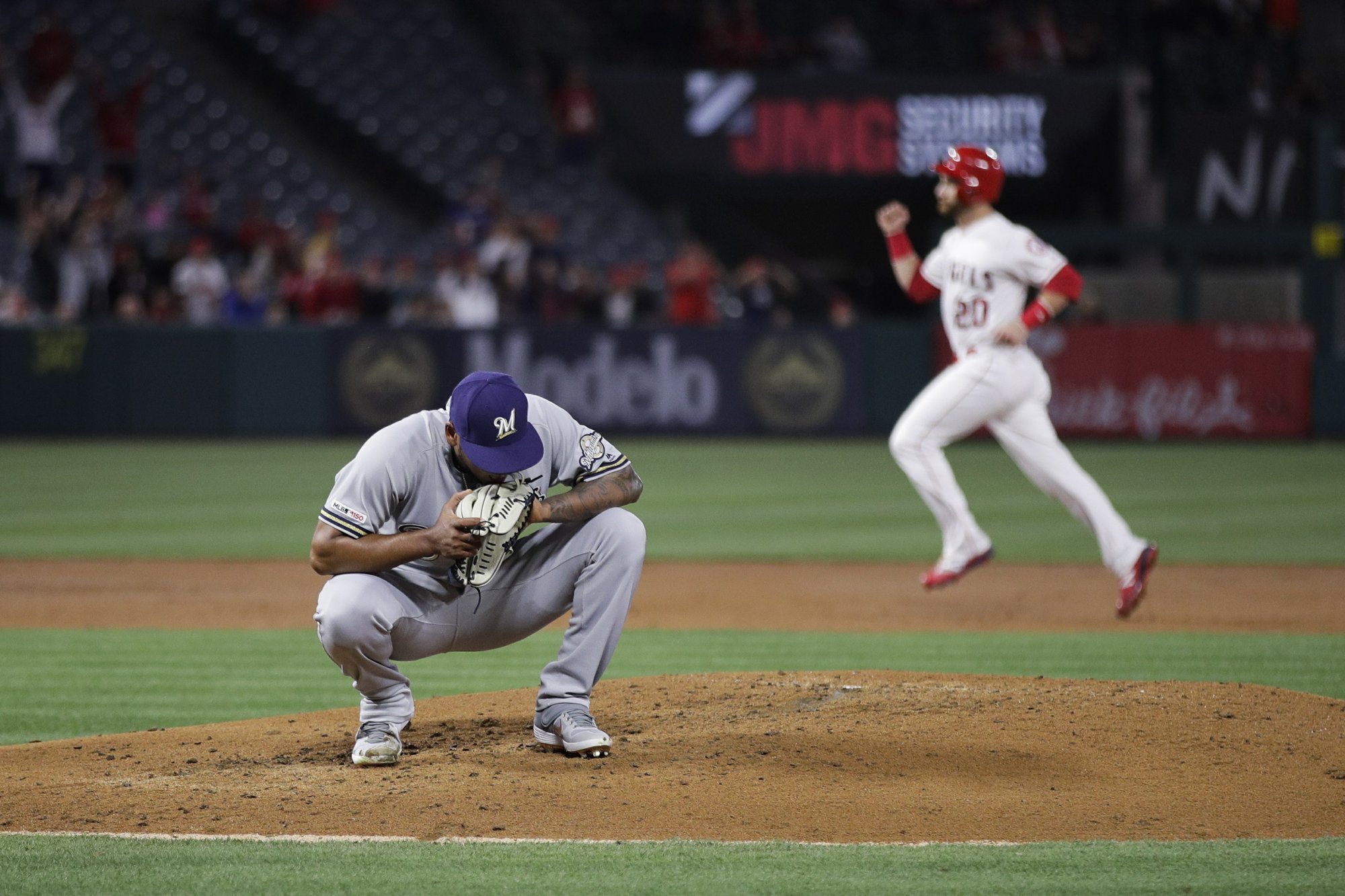 Trout left in the fourth inning after he strained his right groin while sliding into second base in the second. The Angels say their $426.5 million center fielder is day to day.

La Stella, who came into the series with 10 career homers, has connected three times the past two nights. His three-run homer off Freddy Peralta in the first inning gave the Angels a 6-0 lead. The Brewers drew within a run in the fourth before La Stella led off the inning with a drive to center.

The Angels went ahead to stay when Alex Wilson (1-1) walked Lucroy with the bases loaded in the seventh. Simmons doubled in a run in the eighth, and Albert Pujols tacked on a sacrifice fly.

Cam Bedrosian (1-0) pitched a scoreless inning for the win and Cody Allen got three outs for his third save.

Moustakas and Grandal hit consecutive homers in the fifth inning to give the Brewers an 8-7 lead.

Peralta, who threw eight shutout innings and struck out a career-high 11 in his last start, had one of the worst outings of his career. The right-hander allowed a career-worst eight hits and tied a career worst by giving up seven runs in 3 1/3 innings.

Matt Harvey struggled in his second straight home outing. The right-hander allowed six runs in 4 1/3 innings. He has a 15.13 ERA at Angels Stadium.

Home plate umpire Tom Hallion took a foul ball hit by Simmons off the mask in the second and was looked at by an Angels trainer. He remained behind the plate but left between innings. Second base umpire Todd Tichenor went behind the plate to finish the game.

Brewers: Pitcher Jimmy Nelson (right shoulder) threw two innings during an extended spring training game. Manager Craig Counsell said the right-hander is likely to throw again in a couple days before a determination is made on his next step.

Angels: Pitcher Andrew Heaney threw a baseball for the first time since experiencing soreness in his left elbow at the end of spring training. The left-hander received a cortisone shot last week and is unlikely to rejoin the rotation until next month.

Felix Pena (0-1, 5.40 ERA) will make his second start at home as the Angels finish a seven-game homestand. The right-hander struck out seven and allowed one earned run in 4 2/3 innings Friday against Texas. The Brewers will send Brandon Woodruff (1-0, 6.00 ERA) to the mound for his first start against the Angels.

0
0   0
previous Brewers top of order strikes out 10 times in loss to Angels
next Trout could be out tonight, as Brewers wrap up series with Angels
Related Posts