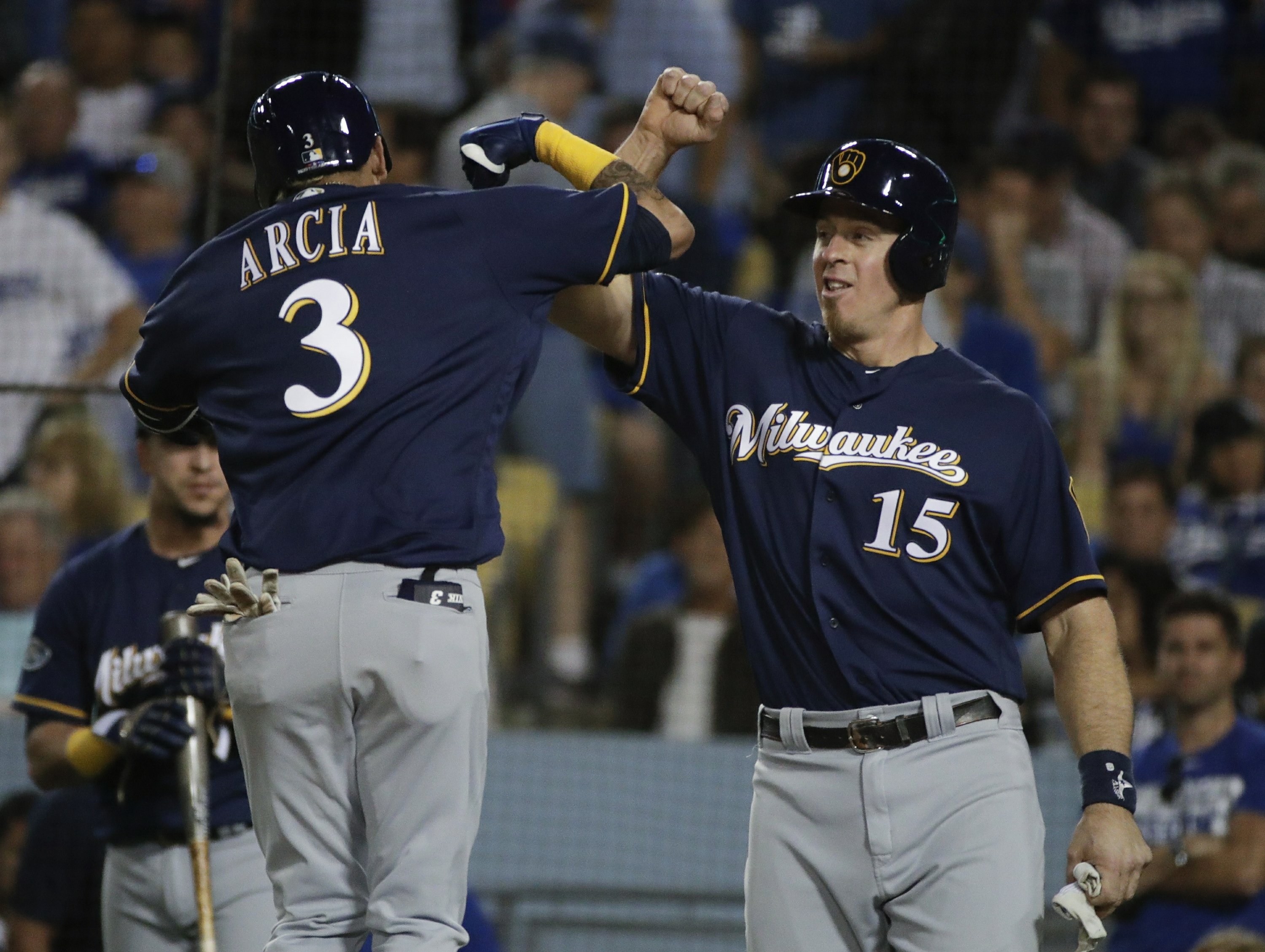 LOS ANGELES (AP) — A veteran starter, an intimidating bullpen and a twice-demoted shortstop who is suddenly flashing power helped the Milwaukee Brewers take a 2-1 lead in the NL Championship Series.

Jhoulys Chacin combined with four relievers on a five-hitter and Orlando Arcia hit a two-run homer in a 4-0 victory over the Los Angeles Dodgers on Monday.

Los Angeles loaded the bases against Jeremy Jeffress in the ninth inning, but the struggling closer shut the door. He struck out Yasmani Grandal and pinch-hitter Brian Dozier to complete Milwaukee’s third shutout in six playoff games this year.

“The 9th inning was entertaining, but they didn’t score.” -Counsell on today’s W. #OurCrewOurOctober pic.twitter.com/WotIs5VPQk

“Our guys that we’re giving the ball to at the start of the game, they’re doing a heck of a job, man. And they’re setting the tone, really,” Milwaukee manager Craig Counsell said.

Game 4 in the best-of-seven series is Tuesday night at Dodger Stadium, with Rich Hill pitching for Los Angeles against fellow lefty Gio Gonzalez.

Ryan Braun had an early RBI double off rookie Walker Buehler, who struck out eight in seven innings. Travis Shaw tripled and scored on a wild pitch in the sixth. Arcia connected for his third postseason homer in the seventh.

With a runner on second and the Brewers nursing a 2-0 lead, Knebel got Manny Machado to ground out before whiffing Cody Bellinger to end the sixth. The right-hander then fanned Yasiel Puig, Grandal and Enrique Hernandez in the seventh.

Joakim Soria retired Chris Taylor on a foul popup for the first out of the eighth. Josh Hader, who didn’t pitch in Game 2 after tossing three scoreless innings in the opener, needed only eight pitches to strike out pinch-hitters David Freese and Matt Kemp to end the eighth.

Hader rarely pitches on consecutive days, but his light workload Monday could give Counsell some options.

“We’re playing to win the series, not just games. Obviously with Josh doing not as much tonight, there’s lots of possibilities there going forward,” Counsell said.

Justin Turner singled and Machado doubled to start the ninth for Los Angeles. Bellinger popped out and slammed his bat before Puig drew a walk, but Counsell stayed with Jeffress, who settled down and came through.

Milwaukee’s vaunted bullpen delivered after the Dodgers hit .333 and scored eight of their nine runs against Brewers relievers during the first two games in Milwaukee, both decided by one run.

The Dodgers also came up empty against Chacin with the bases loaded in the second, when Buehler took a called third strike to end the inning.

Life moves pretty fast. If you don’t stop and look around once in awhile, you could miss it. #OurCrewOurOctober pic.twitter.com/bwE3h91cGy

“We had the right guys in those moments and we just didn’t execute,” manager Dave Roberts said. “We were 0 for 10 with runners in scoring position.”

The Brewers became the first visiting team to pitch a postseason shutout at Dodger Stadium since the Philadelphia Phillies in Game 1 of the 1983 NLCS. Los Angeles had gone 50 consecutive home playoff games without being blanked, the second-longest streak in major league history behind 61 straight for the Boston Red Sox, according to STATS.

The 1905 New York Giants and 1966 Orioles are the only other teams to toss three shutouts in their first six games of a postseason, STATS said.

The Brewers entered these playoffs with one shutout in their postseason history.

“I love just the emotion of these games, the adrenaline everyone is able to play with,” Braun said.

Chacin returned to the scene of the Brewers’ worst loss of the season, a 21-5 rout on Aug. 2. In that game, he was charged with nine runs — eight earned — and five hits, including a grand slam by Bellinger.

Chacin was much better when it counted most. The right-hander struck out six and walked two while outpitching Buehler.

“I always like to pitch here. It’s always a good crowd,” Chacin said.

Milwaukee got to Buehler in the first on Braun’s RBI double into the left-field corner that scored Christian Yelich, who walked.

Buehler retired 10 of the next 11 batters, with only Arcia reaching on an error by Machado at shortstop.

The Brewers struck again in the sixth. Bellinger was slow to chase Shaw’s triple off the top of the wall in center and missed making the catch by inches before the ball caromed away.

Shaw scored on Buehler’s wild pitch to Jesus Aguilar. The ball bounced up and to the left of Grandal, who scrambled after it near the third-base line while Shaw ran to the plate, giving the Brewers a 2-0 lead.

Milwaukee tacked on two more in the seventh. Erik Kratz doubled and Arcia followed with a two-run shot to right field.

Puig chased the ball as it drifted into the lower right-field seats on a night when the first Santa Ana winds of the fall arrived, buffeting the stadium with cool, sustained gusts for most of the game.

It was the latest big hit in October for Arcia, the talented young shortstop who was sent to the minors twice this season as he slumped at the plate. He has three home runs in 20 playoff at-bats, matching his total in 348 at-bats all season.

“Orlando has always been a guy that you want to put a moment on him, put pressure on him,” Counsell said. “Put the spotlight on him. He loves it. And I’m not surprised that he’s thriving in playoff atmosphere. He has this love and he’s wired the right way for this kind of baseball.”

Buehler gave up four runs, five hits and one walk. It was the longest outing by a Dodgers starter in the series so far.

Dodgers: Hill is 1-2 with a 3.55 ERA in nine career postseason starts. He started Game 4 of the Division Series in Atlanta, allowing two runs and four hits in 4⅓ innings, but didn’t factor in the decision. He struck out three and walked five.

0
0   0
previous LEADING OFF: Yelich, Brewers face Dodgers, ALCS has day off
next Counsell talks of Hader's availability for Games 4 and 5
Related Posts