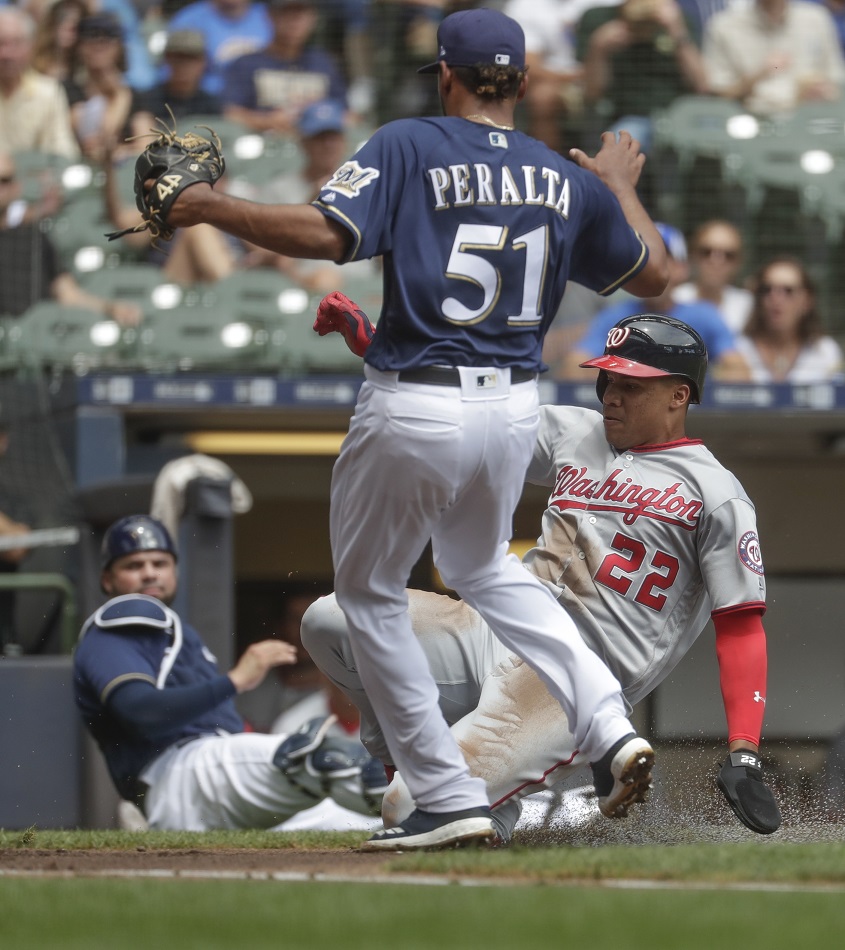 MILWAUKEE (AP) — Tanner Roark put an end to a seven-start winless streak, the longest in a season of his big league career.

Roark (4-12), the NL leader in losses, allowed three hits, struck out a season-high 11 and walked one, helping the Nationals avoided being swept in the three-game series.

“We came out early, scored some runs. So, that was a big confidence booster,” he said. “I just felt confident, trusting myself and trusting my stuff to let it work.”

“He located pretty well today,” said Travis Shaw, who had one of the hits off Roark. “He was pretty good down in the zone.”

Harper, who missed Tuesday’s game because of a stomach ailment, hit a three-run homer in the fifth against Freddy Peralta (4-2) for a 6-0 margin, matching Milwaukee’s Jesus Aguilar, Colorado’s Nolan Arenado and St. Louis’ Matt Carpenter for the NL home run lead.

“I felt OK,” Harper said. “I think it’s going to take a couple of days for sure.”

Hernan Perez hit a three-run homer in the ninth off Sammy Solis and Brad Miller reached on an infield hit with two outs before Kelvin Herrera retired Manny Pina on a soft liner to third.

Peralta, recalled from Class A Wisconsin before the game, gave up seven runs, four hits and four walks in six innings.

A pair of walks and a hit batter loaded the bases in the first for Daniel Murphy, who blooped a two-run single. Peralta followed with a run-scoring wild pitch.

A pair of walks preceded the home run by Harper which was his major-league leading ninth home run on the first pitch this season.

Juan Soto homered in the sixth.

Nationals manager Dave Martinez, upset that Tre Turner failed to run out of the batter’s box after a bunt in Monday night’s game, benched the shortstop for Tuesday’s game. Turner was back in starting lineup on Wednesday after a long talk with Martinez

“He knows better, so he’s back in there today,” Martinez said. “I told him I have a lot of respect for him. He understood. He does a lot of good things for us. I just want him to go out there and play good baseball.”

Brewers: RHP Zach Davies (right rotator cuff inflammation) threw to batters on Monday, but Tuesday experienced a recurrence of back stiffness. He is to have an MRI.

Nationals: RHP Stephen Strasburg (6-7, 3.90 ERA) faces RHP Dan Straily (4-4, 4.02 ERA) on Thursday in the opener of a four-game series at Miami. Strasburg is 7-0 record in the last seven starts against the Marlins.