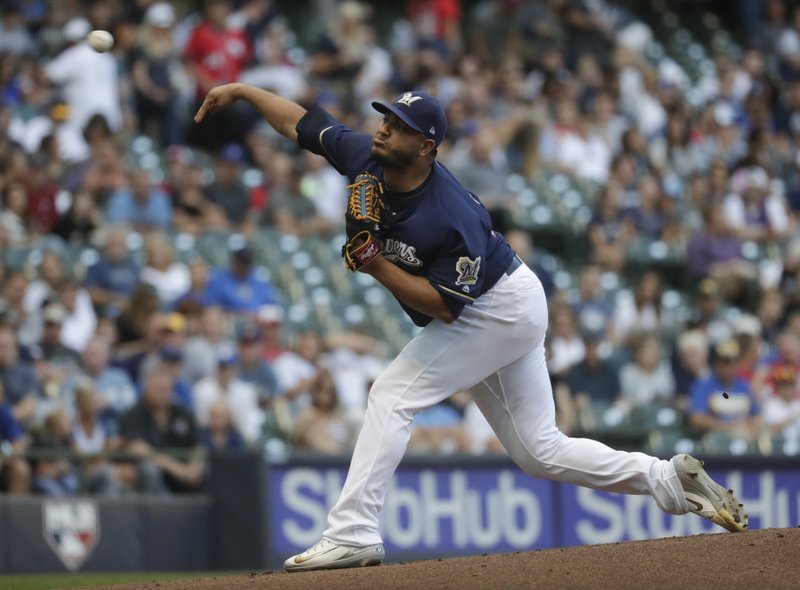 Chacin strikes out 9, as Brewers take down Nationals

Chacin strikes out 9, as Brewers take down Nationals

MILWAUKEE (AP) — Christian Yelich had a base-loaded triple and Jhoulys Chacin had another strong start to help the Milwaukee Brewers beat the Washington Nationals 6-1 on Monday night.

Erik Kratz drove in a pair of runs for the Brewers, who pulled within 2½ games of NL Central leading Chicago, which lost to Arizona 7-1. Milwaukee won for just the second time in 10 games.

Chacin (9-3) limited Washington to one run and two hits in 5⅔ innings, a day after the Brewers used Kratz and utility player Hernan Perez in mop-up roles on the mound in an 11-2 drubbing by the Dodgers. Chacin struck out a season-high nine batters and didn’t issue a walk.

The Brewers also learned on Monday that starting pitcher Brent Suter would be lost for the season with a torn ulnar collateral ligament in his left elbow. Suter left Sunday’s game after three innings when he felt pain. He will have Tommy John surgery.

The Nationals scored first when Daniel Murphy lined a home run to right field leading off the second against Chacin.

The Brewers even the score in the second on Kratz’s sacrifice fly off Washington starter Gio Gonzalez (6-7).

Kratz drove in another run in the fourth with a bases-loaded groundout. Chacin followed with a single to left to drive in his first run of the season.

Yelich lined a triple into the right-field corner with the bases loaded and two outs in the sixth to extend the lead to 6-1.

Nationals: 1B Ryan Zimmerman (right oblique strain) got his first start since being activated from the disabled list on Friday. Zimmerman got hit in the lower back with a pitch from Chacin in the sixth but remained in the game.

Brewers: Recalled RHP Jorge López from Triple-A Colorado Springs to replace Suter. … All-Star 1B Jesus Aguilar didn’t start for the second consecutive game due to hamstring soreness. “There’s enough soreness that we’re going to be cautious and hold him out today,” manager Craig Counsell said. … 1B/OF Eric Thames (right hamstring soreness) could come off the DL as early as Tuesday. … RHP Zach Davies (right shoulder tightness) threw live batting practice on Monday and is expected to make a rehab start with Class A Wisconsin on Thursday.

Nationals: Jeremy Hellickson (4-1, 3.29 ERA) has allowed one earned run spanning 11 innings over his last two starts. Opponents are hitting .111 (4-for-36) during that stretch.

Brewers: Junior Guerra (6-6, 3.23), who has been on the disabled list since July 14 with right forearm tightness, will be activated and get the start. Guerra is 1-0 with a 2.16 ERA in two career games (one start) against the Nationals.