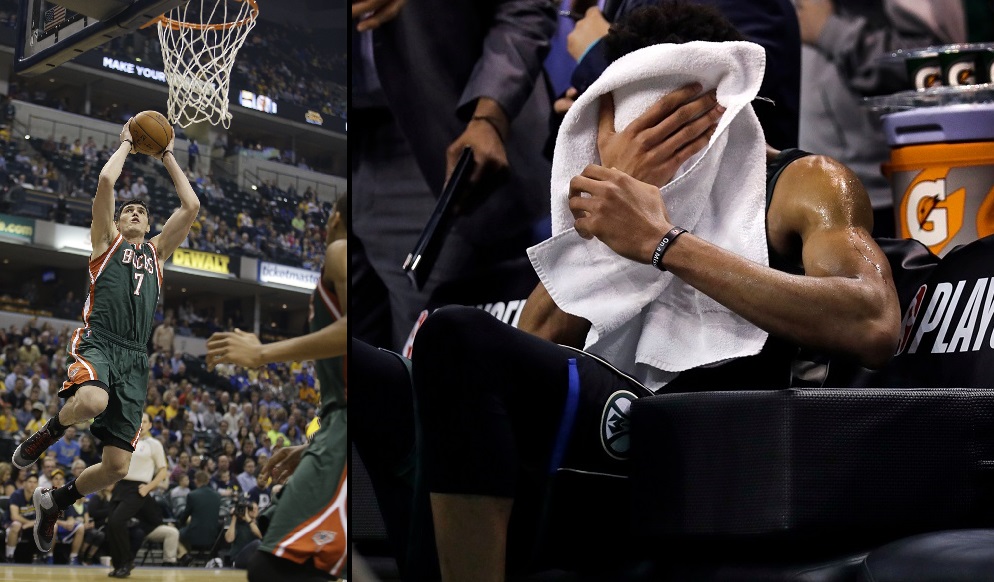 GAH, NBA FREE AGENCY: Who cares about Cousins to Golden State, what about the Bucks?

GAH, NBA FREE AGENCY: Who cares about Cousins to Golden State, what about the Bucks?

The NBA has us all fooled. It’s a year-long sport but its most exciting time isn’t the playoffs. It’s right now — the offseason — and it’s not even close.

We all knew LeBron James signing was going to be big news. We all thought a Kawhi Leonard trade might trump that. Little did we know Demarcus Cousins going to the Golden State Warriors was in the mix.

I will let you form your own opinions on the most versatile center — if we’re counting Anthony Davis as a power forward — going to the best team. The NBA was already ruined for a lot of fans when Kevin Durant went to Oakland. This doesn’t change anything.

The LeBlakers … the LeLakers? (It’s a work in progress) LeBron’s Lakers aren’t beating the Warriors the way they are anyway. And it seems they might just hold out a year to get Leonard in free agency.

So Cousins signing with the Warriors doesn’t make me mad, except that the Bucks didn’t even call the center. Apparently, not one team did, according to ESPN.

That sort of makes me mad, but hey, the Bucks have John Henson. What else bugs me with the Bucks is that they decided to be one the first transactions of free agency  and go all-in on Ersan Ilyasova for 3 years, $21 million — two of those years guaranteed. Thank GOD they got him before everyone else!

The guy has played on seven rosters in three seasons. SEVEN! (Technically, he was on Philly twice).

Milwaukee managed to trade Plumlee to Michael Jordan’s Hornets and, sadly for Teletovic, his career ended because of blood clots in his lungs, allowing the Bucks to get out from under that contract, as well.

But now they add Ilyasova to the mix, instead of just saving that money, at least for a few days into free agency, so they can get a look at who’s going where and for what.

But, nope, the new Bucks GM has to show how savvy he is getting the guy who was cut last season by the team with the worst record in the NBA, after being traded from the Oklahoma City Thunder. He ended up hitting a couple 3-pointers for Philadelphia in the playoffs.

The next move for Milwaukee is likely Jabari Parker, since the team is now over the salary cap. Nobody has offered the restricted free agent a contract yet. If they do, the Bucks will have an opportunity to match it. Hard to say if he gets a contract offer because of his injury history and the few teams that have cap space.

The smart thing to do for the Bucks — and possibly Parker and the NBA — would be to let him play out this final year of his rookie contract and go into next offseason an unrestricted free agent with the ability to sign with any team he chooses.

But, knowing the Bucks, they’ll lock him up for 4 years, $100 million, despite the fact that his ability to move laterally seems to have diminished extensively because of knee injuries.

Realistically, there’s no telling what Parker is worth. He’s somewhere between Julius Randle’s 2-year, $18 million contract and Nerlens Noel’s 2-year, $6 million deal (Just of note, Noel turned down a 4-year, $70-million deal last year. No, it was not from the Bucks).

If Milwaukee wants to keep Giannis Antetokounmpo happy — and in town — they need to think about saving some money and overpaying a big name free agent. Yes, Antetokounmpo is signed through the 2020-21 season but if you haven’t noticed lately, players — really good players — get unhappy and demand trades well before their contracts are up (see Kawhi Leonard, Kyrie Irving, Paul George).

Sure, it might be hard to get someone to play in Milwaukee, but there is that new stadium and the best player in the east resides there. (No, it’s not Joel Embiid — though I did say, right here, the Bucks should have drafted him, not Parker, in 2014 … after Embiid’s foot injury).

Antetokounmpo has always said the right things, including Monday when he told Colin Cowherd, “No way. I like finishing the stuff that I have with Milwaukee. My goal is to win in Milwaukee, bring a championship to the city … I would never leave for L.A.”  So, there’s that.

"My goal is to win in Milwaukee, bring a Championship to the city… I would never leave for LA." — @Giannis_An34 tells @TheHerd #FearTheDeer pic.twitter.com/7pOhsjyByz

What to watch in the NBA, as training camps are set to open