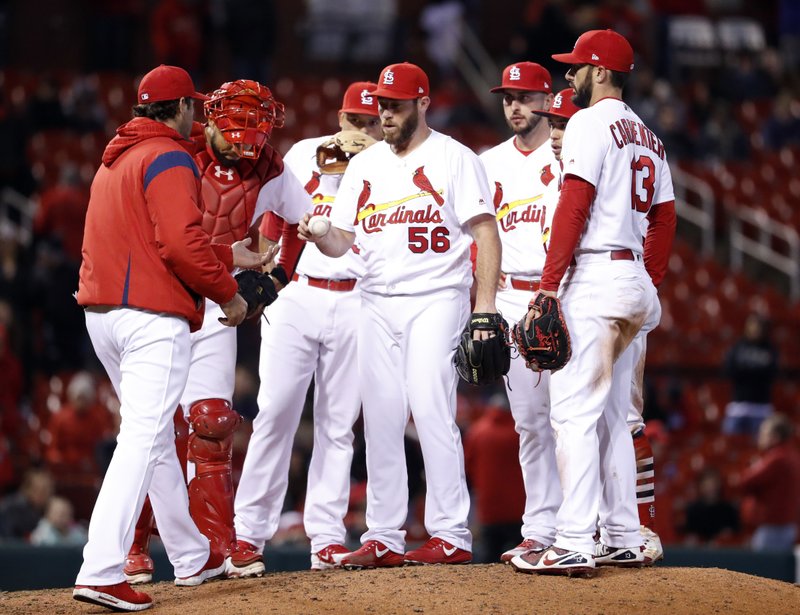 Holland walked four batters in the 10th inning and forced home the go-ahead run Monday night that gave the Milwaukee Brewers a 5-4 win over the Cardinals.

“It’s hard to walk four guys and consider it a success,” Holland said. “I struggled with my command. I felt good and just put myself in a tough spot.

“There’s really no excuse for walking four guys in a row,” he said.

Brewers newcomer Lorenzo Cain tripped over the foot of Cardinals first baseman Jose Martinez on a play in the ninth, and both exited. Martinez bruised his right Achilles. Cain has a sore quad.

The 32-year-old Holland, who tied for the NL lead with 41 saves for Colorado last season, signed as a free agent on opening day. He pitched two innings at Class A before joining the Cardinals earlier in the day.

Holland (0-1) walked two batters to begin the 10th. After a sacrifice bunt by Eric Sogard, an intentional walk loaded the bases.

“You know, they gave me the option there to swing. They really did,” said Sogard, who entered the game batting .071 but got three hits. “I see in that situation to even risk not getting the job done was not acceptable.

“I had to get the job done and get the lead runner over to third with less than two outs. I have 100 percent satisfaction getting that bunt down.”

“I hope it’s a rarity, but sometimes you just don’t have a good feel for the strike zone,” Holland said. “Obviously today I struggled with my command kind of from the go.”

Matt Albers (2-0) gave up the tying run in the ninth. The Cardinals loaded the bases with no outs, and Dexter Fowler’s sacrifice fly tied it at 4-4.

St. Louis starter Miles Mikolas pitched 6 1-3 innings. He gave up four runs on eight hits. He struck out five and had a balk.

A two-run single by Manny Pina gave the Brewers a 4-3 lead in the fourth.

The Cardinals took a 3-2 in the third with all the runs coming after there were two outs. Fowler hit an RBI single and after Jhoulys Chacin walked the bases loaded, Marcell Ozuna hit a two-run single.

Milwaukee scored twice in the second on a single by Domingo Santana and a two-out double by Arcia.

Milwaukee outfielders cut down two runners attempting to take an extra base. In the first, Fowler tried to stretch a single to right center into a double and was thrown out by center fielder Cain. In the second, Ozuna was thrown out at third after hitting a double down the third-base line by left fielder Ryan Braun.

Brewers: OF Brett Phillips was recalled from Triple-A Colorado Springs on Monday. He replaces OF Christian Yelich (right oblique injury). Phillips, who was 1 for 7 with a triple and seven walks, at Colorado Springs, takes the spot of reliever Adrian Houser, who was optioned Sunday to Double-A Biloxi.

Cardinals: RHP Luke Gregerson (left hamstring strain) was to make his third rehab appearance Monday, general manager Mike Girsch said before the game. “We’re getting close. We’re probably trying to get him back-to-back and see how that goes, but maybe a week or 10 days, something like that in that range,” Girsch said. … 3B Jedd Gyorko (right hamstring strain) did some work on the field. “He’s probably a few days from ramping up his baseball activities,” said Girsch, who expects Gyorko to be back in about 10 days. … RHP Brett Cecil (left shoulder strain) also is dealing with tendinitis in his foot, Girsch said. He is not expected back until close to the end of the month if not later.

Brewers: LHP Brent Suter (1-1, 6.30), who pinch ran for Cain, will be making his third start of the season. Suter is 0-2 with a 4.50 ERA in six career games and two starts against the Cardinals.