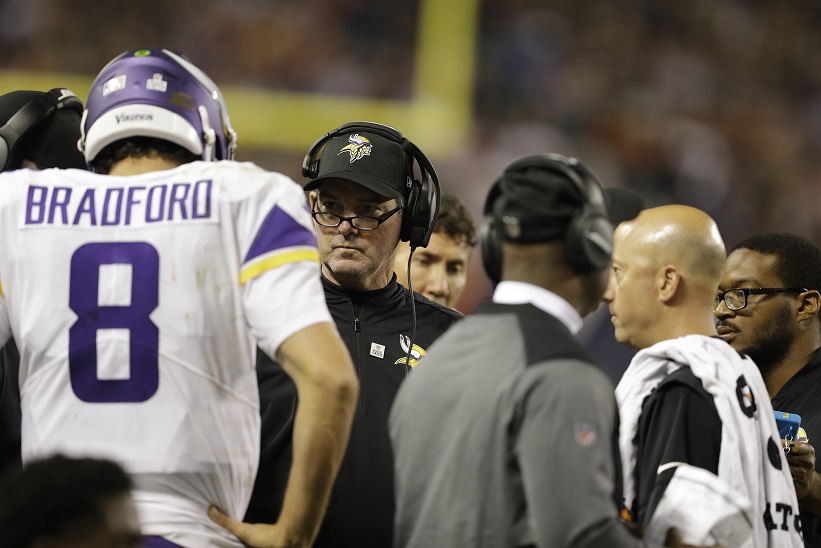 Vikings QB Sam Bradford could return to practice next week

Vikings QB Sam Bradford could return to practice next week

EDEN PRAIRIE, Minn. (AP) — Minnesota Vikings quarterback Sam Bradford could return to practice next week as he recovers from a knee injury from Week 1.

Bradford has been out since a brief return in Week 5 against Chicago, which Minnesota plays Sunday in the regular-season finale. Bradford was taken out at halftime and was placed on injured reserve on Nov. 8.

“He says he feels good,” Zimmer said. “He’s been working out and doing things. Getting on the field, he’s throwing the ball and doing workouts.”

Bradford was the NFC offensive player of the week after setting a career-high 143.0 passer rating in the opener with 346 yards passing and three touchdowns.

Bradford took a hit in the game which caused soreness in his surgically repaired knee. His only other game action this season was in the first half at Chicago when he went 5 of 11 for 36 yards passing and was sacked four times, his mobility limited by the injury.

In Bradford’s place, Case Keenum has led Minnesota to a 12-3 record. Keenum has a 98.1 quarterback rating and 21 touchdowns to just seven interceptions.

The Vikings can clinch a bye in the first round of the playoffs with a win against the Bears on Sunday.

0
0   0
previous Giannis back but Bulls thump Bucks once again
next Warriors winning minus Curry; can they lose once he’s back?
Related Posts