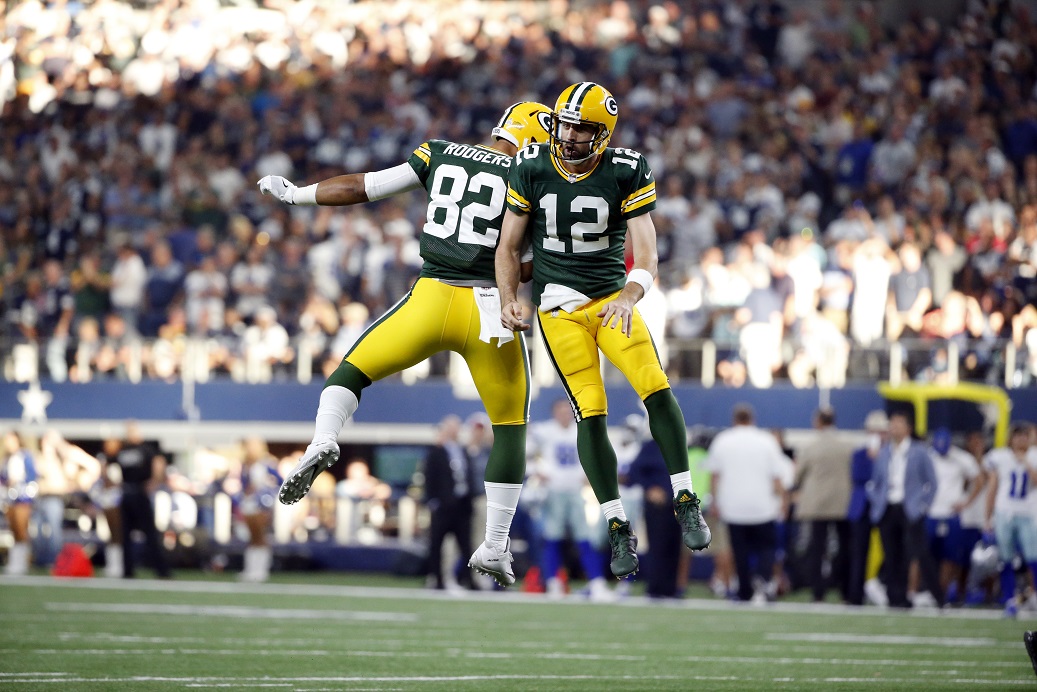 CHARLOTTE, N.C. (AP) — The Green Bay Packers are hoping the return of Aaron Rodgers can propel them into the postseason.

But the Packers (7-6) are going to need plenty of help aside from the two-time NFL Most Valuable Player’s return, as they remain on the outside looking in at the NFC playoff race entering Sunday’s game against the Carolina Panthers.

Green Bay is three games behind Minnesota with three games remaining, so winning the NFC North is considered a long shot.

Rodgers knows the Packers have to win all three remaining games, but downplayed his first start since breaking his collarbone in Week 6.

“Hopefully it gives a lift to some of the guys but I’m not coming back to save this team,” Rodgers said. “I’m coming back to play quarterback the way I know how to play it.”

Packers coach Mike McCarthy said he wasn’t surprised Rodgers was able to return so quickly given how aggressively he attacked his rehabilitation — and his desire to win.

“He couldn’t do any more than you possibly could as far as clearing each threshold that you have to to come back,” McCarthy said.

Further south, Rodgers’ return has been greeted with a mere shrug of the shoulders.

It’s not that the Panthers don’t respect Rodgers, but Carolina coach Ron Rivera has been preaching to his No. 5 ranked defense to prepare for the Packers as if Brett Hundley was still the starting QB.

“To us it shouldn’t be a big deal,” Rivera said. “They said he was going to be back for our game. That’s what we expected. I don’t want our guys getting caught up in it. I want our guys focusing on getting prepared.”

But maybe there is some reason to be concerned.

Rodgers has played well against Carolina. He’s averaging 307.5 yards per game with 12 touchdown passes and three interceptions over the past four meetings.

The Packers will need to step up their protection.

Rodgers was sacked 19 times in five games before being injured on Oct. 15. Green Bay has allowed the third-most sacks (43) in the league and will face a Carolina defense that is tied for third in the league in sacks with 40.

PEPPERS FACES OLD FOE: McCarthy said he’s not surprised that Julius Peppers is on the verge of his ninth double-digit sack season. The 37-year-old defensive end has 9½ sacks coming into the game against his former team. McCarthy said that Peppers works hard, was a great leader during his three seasons for the Packers and has nothing but respect him.

BALANCE WITH BACKS: There was at least one benefit for the offense without Rodgers: the Packers rediscovered their running game. Rookie running backs Jamaal Williams and Aaron Jones have each had 100-yard games since Rodgers got hurt, and the Packers even incorporated some read-option looks with Hundley at quarterback. Those plays are likely to go away with Rodgers back, though the production out of the backfield has brought more balance. Williams, who has secured the starting job of late, has also become a threat in the passing game, with two receiving touchdowns over the past three weeks.

RUNNING ON FULL: The Packers can expect to see a heavy dose of Cam Newton, Jonathan Stewart and Christian McCaffrey in the running game. Carolina has run for more than 200 yards in each of its past three home games — all victories. “We know what our DNA is,” Newton said of the run game. Newton has been a major factor in the big numbers, using his scrambling ability to create plays. He’s averaging 83.6 yards rushing over his past three games at home.

THE CLAYMAKER: Linebacker Clay Matthews is on a pass-rushing roll with five sacks over his past three games, plus the pressure last week on Browns quarterback DeShone Kizer that led to an interception in overtime by Packers safety Josh Jones to set up Green Bay’s game-winning score. There was good news midweek for the pass rush with linebacker Nick Perry, who has seven sacks, returning to practice on a limited basis following foot and shoulder injuries. But the Packers face a more difficult challenge this week with Carolina quarterback Cam Newton’s mobility.

THE OLSEN FACTOR: Greg Olsen is back in the starting lineup and Rivera knows it’s time to get the three-time Pro Bowl tight end more involved in the offense. Olsen missed eight games on injured reserve with a broken foot and had a setback upon his return. He finally played a full game last week against Minnesota, but did not catch a pass. Olsen had three straight 1,000-yard receiving seasons from 2014-16.