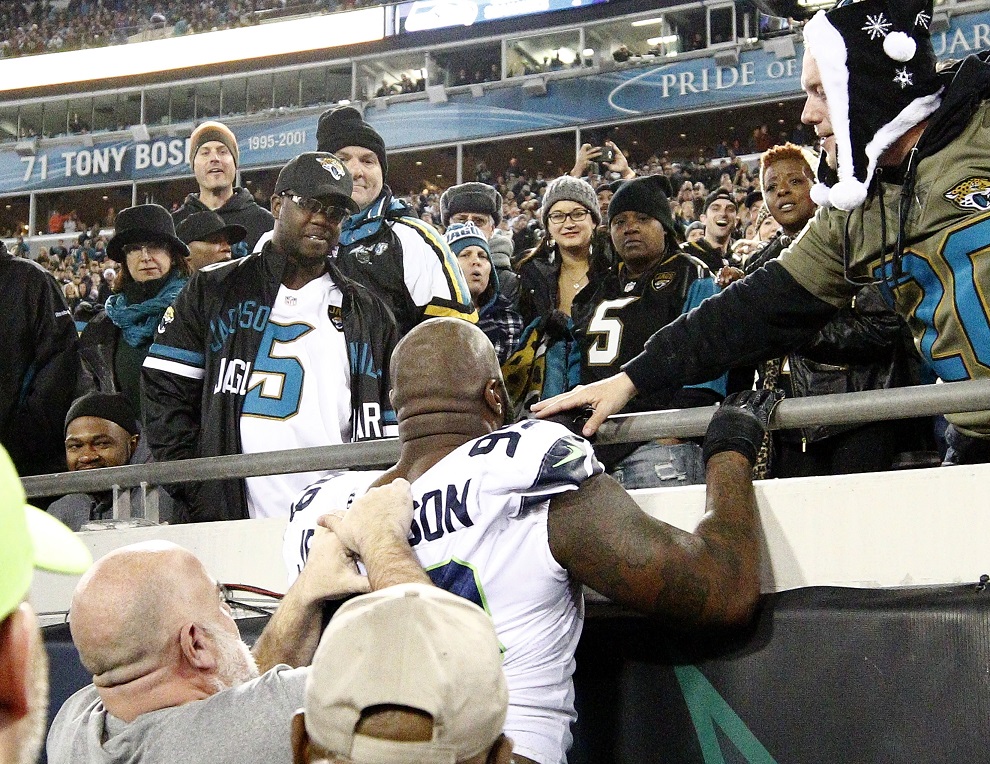 WATCH: Seattle DT heads for stands, as Seahawks melt down in final seconds

WATCH: Seattle DT heads for stands, as Seahawks melt down in final seconds

JACKSONVILLE, Fla. (AP) — Seattle Seahawks defensive end Quinton Jefferson was jogging off the field when something whizzed by his head.

Jefferson stopped, pulled off his helmet and headed toward a rowdy section of fans.

Jefferson pushed aside security guards and started jawing with the spectators. Just when it looked like Jefferson was about to walk away for good, what looked like a cup of beer came flying out of the seats. That prompted Jefferson to rush toward the stands and start trying to climb up. He had to be restrained, pulled back by his shoulder pads, and escorted to the locker room.

It was an ugly ending to an exciting game.

The Jacksonville Jaguars felt what happened on the field was even worse.

The Jaguars (9-4) took exception to the way the Seahawks (8-5) handled the final snaps , two kneel-downs in the closing seconds of Jacksonville’s 30-24 victory.

“There’s no room in the game for that,” tight end Marcedes Lewis said. “You see we’re kneeling. You can get somebody hurt. We’re out there trying to kneel. There are no timeouts. You guys can’t stop the clock, so why try to hurt somebody?

“We had 60 minutes to handle that. The last 30 seconds, while we’re kneeling, you’re going to spear somebody in the legs? That’s not cool.”

Seattle scored twice on long passes in the fourth quarter, with Russell Wilson finding Paul Richardson for 61 yards and then Tyler Lockett for 74 yards. The second one cut the lead to 30-24, and the Seahawks got one last chance to tie or take the lead. But Wilson misfired on a fourth-and-9 play near midfield.

Leonard Fournette iced the game with a 13-yard run on a third-and-11 play. Jacksonville tried to run out the clock from there, but the Seahawks wouldn’t go quietly.

More pushing and shoving ensued after Bortles’ next kneel-down, and Jefferson was tossed.

Seattle coach Pete Carroll also got flagged for coming onto the field. Carroll walked into Seattle’s huddle to settle down his players.

“I just tried to make a statement to our guys so we didn’t finish with any more garbage happening out there.”

“Somebody poured a beer on his head walking out of the stadium or something,” Carroll said. “I told him that’s pro football. They pay to get in. They can do whatever they want, I guess, so that’s what happened.”

The game had a few chippy moments, with Seattle guard Germain Ifedi getting flagged for taunting a referee following a holding call and tight end Jimmy Graham getting penalized for unnecessary roughness for a late hit out of bounds.

But the bigger exchanges happened with the game decided.

“Nobody likes to lose, but at the end of the day, this is our profession,” Jaguars defensive tackle Malik Jackson said. “We have to start acting right and be professionals. That’s twice now that teams have gone against us and wanted to act out. We’re just socking them in the mouth and getting them a little upset. We’re going to keep doing it. That doesn’t bother us.”

Jackson was referring to the Cincinnati-Jacksonville game early last month, in which Jaguars cornerback Jalen Ramsey and Bengals receiver A.J. Green were ejected for fighting. Green attacked Ramsey at the end of a play and threw him to the ground in a choke hold.

“It’s a little bit of people aren’t used to getting beat like that by the Jaguars,” quarterback Blake Bortles said. “There is no reason to take anything from anybody. We just beat the crap out of you for 60 minutes.

“I think obviously you have to be smart and understand the situation and what is going on and not do anything stupid. I think this team definitely plays with a little bit of an edge.”

Bennett and Jefferson declined comment, but Bennett ripped a reporter who attempted to ask Jefferson about the incident.

“He’s not an animal,” Bennett said. “He’s a human being, so get out of here. How would you like it if one of your kids was playing sports and somebody poured beer on him?”