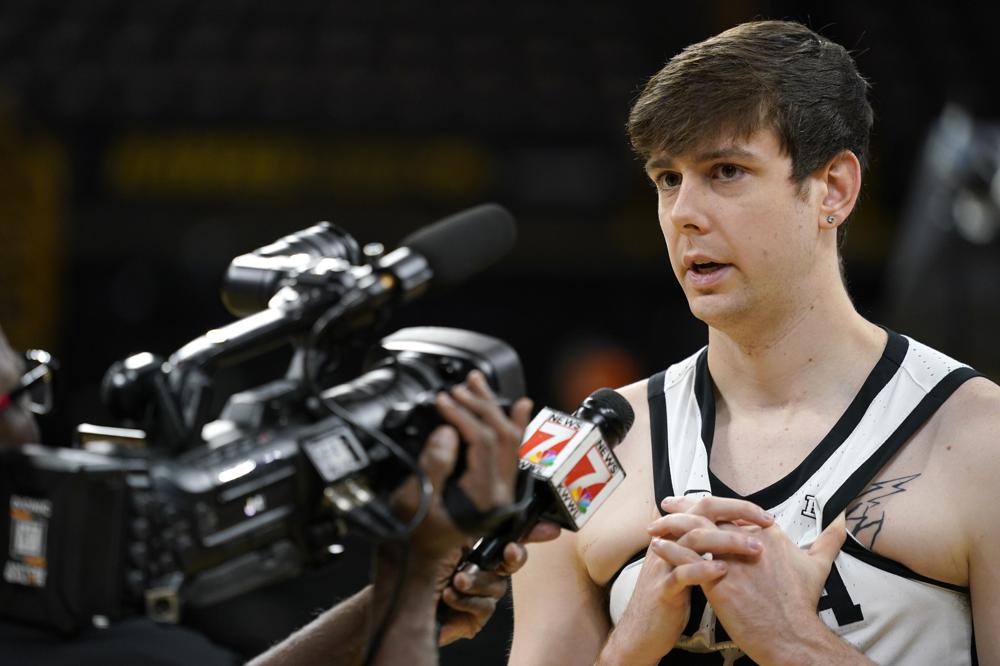 Iowa’s meeting with No. 15 Duke at Madison Square Garden on Tuesday night is more than just another game to Patrick McCaffery.

The game opens the Jimmy V Classic doubleheader, which raises funds for cancer research through the V Foundation. The second game matches No. 2 Texas against No. 17 Illinois.

McCaffery, the 22-year-old son of Hawkeyes coach Fran McCaffery, was 13 when he was diagnosed with cancer of the thyroid, the small gland at the base of the front of the neck that regulates a person’s metabolism.

“The fact I’m able to play at that level and be a starter in this game is something crazy to think about,” McCaffery said. “I’m someone who has benefited from things like the Jimmy V and have seen first-hand how the Jimmy V can help people. Having the opportunity to play in that event is something I’ll forever cherish and I’m really looking forward to.”

Patrick had two surgeries in 2014, the first to remove half his thyroid and, after tests showed it was malignant, a second to remove the rest of the gland and nearby tissue.

His follow-up treatment included taking two radioactive iodine pills to eliminate any possible remaining cancer cells from his lymph nodes. It was a grueling few days when he had to isolate to such an extreme that he rode home from the hospital in the car trunk and had to sleep in the basement.

Anything he touched, such as video game controllers, had to be thrown away. His mom, Margaret, cared for Patrick while his dad and siblings stayed at a hotel because of the potential danger of radioactive iodine exposure to others.

Three months after his diagnosis, he was declared cancer-free and was able to rejoin his summer basketball team. He went on to become the all-time leading scorer at Iowa City West High and a top-60 national recruit before he joined older brother Connor and his dad with the Hawkeyes.

Patrick has played in 72 games since 2019-20 and started 38 of 39 since the start of last season. He goes into Tuesday’s game averaging a career-best 12.9 points, second on the team behind Kris Murray’s 21.

Having no thyroid means Patrick must deal with occasional fatigue and low energy and a desire to eat at odd times. He has blood tests regularly to monitor his metabolic activity.

“I understand I’m not going to be able to do things the same way people who have one do,” he said. “I have to work through that, and I think I’ve done a good job of it. I feel good. Obviously there’s no more cancer, just lingering effects that I’ll have to deal with the rest of my life and be cognizant of.”

Patrick said some people might be surprised he’s able to play basketball at such a high level, but he was determined to not let cancer stop him from pursuing his goals.

Fran McCaffery, whose parents died of cancer, and the entire family have been involved in raising awareness and money for cancer research.

The V Foundation was founded by Jim Valvano, the college basketball coach and broadcaster who died of cancer in 1993. The foundation has awarded over $310 million in cancer research grants.

Pediatric thyroid cancer is highly curable but has not been researched much historically, said Dr. Vivian Weiss, who was awarded a $200,000 V Foundation grant in 2019 to study differences in how the disease behaves in children and adults and develop individualized treatment plans for children.

Weiss, an assistant professor in the Department of Pathology, Microbiology, and Immunology at Vanderbilt University, said she and her colleagues have performed genetic analysis on 100 children and the results have been promising for improving detection and treatment.

Weiss said Patrick’s willingness to share his story has put a spotlight on the disease.

“His ability to perform at that level and be as amazing and as successful as he is is really incredible,” she said, “and I think he serves as a wonderful role model for other children struggling with thyroid cancer. It’s not an easy journey for any of these children. It’s wonderful to see how resilient and how much potential there is for these children to live full, healthy and happy lives.”

TOP PHOTO: FILE – Iowa forward Patrick McCaffery is interviewed during Iowa’s NCAA college basketball media day, Wednesday, Oct. 5, 2022, in Iowa City, Iowa. Playing Duke in Madison Square Garden is a big deal for any college basketball player. For Iowa’s Patrick McCaffery, it’s even more meaningful because the game Tuesday is part of the Jimmy V Classic, which raises funds and awareness for cancer research. McCaffery has come back from thyroid cancer as a teenager to be the Hawkeyes’ second-leading scorer. (AP Photo/Charlie Neibergall, File)