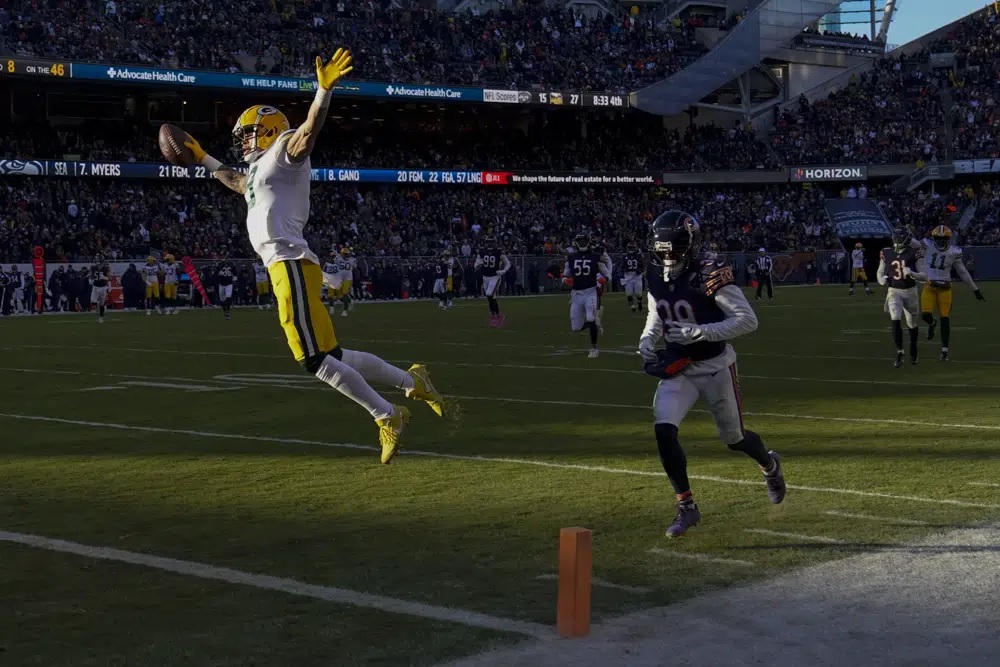 During a season in which not much else has gone right for them, the Green Bay Packers at least appear to have found their next go-to receiver.

Christian Watson continued the second-half surge to his rookie season Sunday by scoring on a 14-yard catch and a 46-yard run in Green Bay’s 28-19 victory at Chicago, which enabled the Packers (5-8) to avoid getting eliminated from playoff contention as they head into their bye week.

Watson, a second-round pick from North Dakota State, has seven touchdown catches and one touchdown run over his past four games.

“It’s a rapid, wild development,” quarterback Aaron Rodgers said after Sunday’s game. “It’s hard to think about another player who goes from being kind of here and there, minimal production, to go-to type player, home run player.”

Watson had just 10 catches for 88 yards before this four-game stretch, his only touchdown coming on a 15-yard run against New England on Oct. 2. Watson spent most of the preseason recovering from knee surgery, missed two games with a hamstring injury and missed most of a third because of a concussion.

NFL
Brady throws for 2 late TDs, Buccaneers beat Saints 17-16
Saints allow 2 late TDs in frustrating 17-16 loss to Bucs
St Louis Cards announcer McLaughlin arrested on DWI charge
Doncic, Mavericks preserve big lead, roll past Suns 130-111
Now that he’s healthy, Watson is showing the big-play ability the Packers (5-8) had lacked from their passing attack for much of the season as they dealt with the loss of two-time All-Pro wideout Davante Adams, now with the Las Vegas Raiders.

Although Watson is 6-foot-4 and possesses good speed, he lasted until the second round in part because he didn’t put up huge statistics while playing in North Dakota State’s run-oriented offense.

“I think I was definitely pegged as being rawer than I truly was,” Watson said. “I definitely feel like I have a lot of growth and potential as well. I was in an offense that, you know, was really successful at what we did, and I only needed to run three or four routes for us to be successful and win championships in college. That’s exactly what we were going to do.

“So there’s a lot that scouts, or whoever turned on the tape, weren’t able to see out of me because we didn’t need to do that to be successful. Now I think I’ve been able to prove I can do more and more than people thought I could do. But, you know, I think there’s a lot of room for growth as well.”

One week after allowing Philadelphia’s Jalen Hurts to run for 157 yards — the highest single-game total by an Eagles quarterback — the Packers gave up a 55-yard touchdown keeper to Chicago’s Justin Fields. The defense also allowed a 56-yard completion to Equanimeous St. Brown and a 49-yard pass to N’Keal Harry. … The Packers didn’t have any sacks.

Watson has scored eight touchdowns in his past four games. … RB A.J. Dillon had a season-high 93 yards rushing, including a 21-yard touchdown. Dillon has rushed for 157 yards and two touchdowns on 26 carries over his past two games. … LT Zach Tom, a rookie fourth-round pick from Wake Forest, performed capably in Bakhtiari’s absence.

TE Robert Tonyan had one catch for 10 yards. Tonyan hasn’t scored a touchdown since Oct. 2 and has totaled 57 yards receiving over his past four games.

Packers coach Matt LaFleur had no update on a timetable for Bakhtiari’s possible return. “We’ll see how he feels when we come back from the bye and see where he’s at,” LaFleur said Monday. “From what I’ve been told, it could be a while.” … WR Romeo Doubs (ankle) sat out a fourth straight game. S Darnell Savage (foot) also didn’t play.

The Packers have a week off before hosting the Los Angeles Rams (3-9) on Dec. 19 in a Monday night matchup between two of the NFL’s most disappointing teams.

TOP PHOTO: FILE – Green Bay Packers’ Christian Watson reacts as he crosses the goal line after catching a touchdown pass during the second half of an NFL football game against the Chicago Bears Sunday, Dec. 4, 2022, in Chicago. (AP Photo/Charles Rex Arbogast)