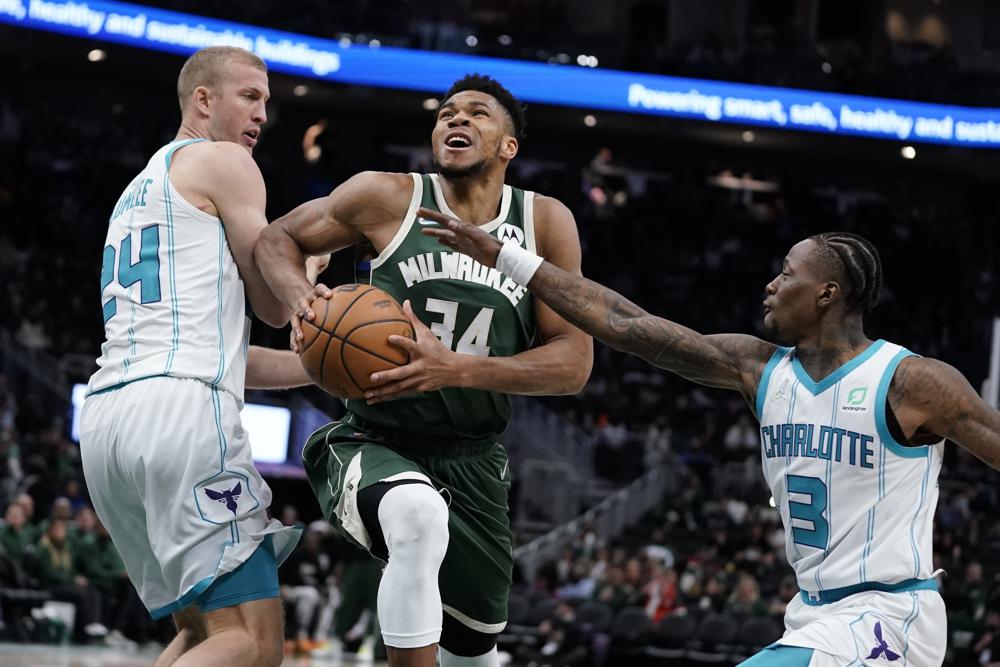 ORLANDO, Fla. (AP) — Giannis Antetokounmpo is having issues at the foul line again.

Not with his accuracy — but his timing.

For the second time in his team’s last three games, the Milwaukee Bucks’ star had a free throw taken away because he didn’t shoot it within the allotted 10 seconds — a problem that has dogged him at various times throughout his career.

“Sometimes I’m so tired I take a few extra seconds of resting,” said Antetokounmpo, who turns 28 on Tuesday. “If there’s going to be a 10-second call, I expect it. I’ll give them the ball and run the other way.”

The latest chapter in this years-long saga came with 1:52 left in the third quarter of Milwaukee’s 109-102 win over Orlando on Monday night. Antetokounmpo was fouled by Moritz Wagner and took about 13 seconds before taking and making his first attempt.

On what would have been the second free throw, Antetokounmpo’s routine was much like the previous attempt. He caught the pass from official Nate Green, took a deep breath and held the ball on his left hip for about 6 1/2 seconds. He then moved the ball in front of him, holding it with both hands, spun it, dribbled once, gathered it again and took another deep breath.

All that took about 7 more seconds.

“At the end of the day, that’s my routine,” Antetokounmpo said. “Obviously, I have to respect the rules and shoot it before the 10 seconds. But anytime that it’s 10 seconds, I’m OK with it. If they call it, I don’t complain.”

By then, referee Brian Forte had seen enough and blew his whistle. Antetokounmpo never got the shot away, and it wouldn’t have counted at that point if he did.

“He’s aware,” Bucks coach Mike Budenholzer said when asked if he talks to Antetokounmpo when the foul line becomes a struggle. “It’s a brief conversation. He’s got routines and sticks to them. I think he’s overall in a good place this year. He’s just got to tighten it up a little bit.”

A similar scene happened Friday in Milwaukee’s loss to the Los Angeles Lakers, when Antetokounmpo was called for a 10-second violation in what became a 133-129 loss. He didn’t play in Milwaukee’s win over Charlotte on Saturday.

For the season, Antetokounmpo is shooting a career-worst 62% from the foul line. He had a three-game stretch in November where he shot a horrible 13-for-38 (34%) from the line — a 4-for-15 game in Philadelphia was part of that, the night where he returned to the court postgame for some practice and wound up sending a ladder toppling to the ire of arena workers.

“As I’ve said, 10 games ago, I wasn’t at my best,” Antetokounmpo said. “Now I’m making some. I’m shooting it better and hopefully I can keep this up. And I believe I’m going to keep this up.”

The wording of the NBA definition for free throws in the rulebook is this: “A free throw is the privilege given a player to score one point by an unhindered attempt for the goal from a position directly behind the free throw line. This attempt must be made within 10 seconds.”

That has been an issue for Antetokounmpo throughout his career — most notably in the 2021 playoffs, when he was called for 10-second violations multiple times. That didn’t exactly cause lasting damage; Milwaukee won the NBA title and Antetokounmpo was NBA Finals MVP.

There was a game in 2016 against Portland when Meyers Leonard, then of the Trail Blazers, held up his fingers while on the bench to silently count off the 10-plus seconds it took Antetokounmpo to shoot a foul shot. Fans in Toronto have used the tactic during some of Antetokounmpo’s past trips there, too.

In the game against the Lakers on Friday, Russell Westbrook counted off 10 seconds as well — not silently, and got the violation called.

“I did feel validated,” Westbrook said. “Glad they paid attention.”

Antetokounmpo fought through whatever the issue is on subsequent trips to the line Monday.

He went back to the line with 2 minutes left in regulation and Milwaukee clinging to a four-point lead. He moved much more quickly, unofficially taking the full 10 seconds in both cases before releasing the basketball, and made one of the two shots.

With 40.2 seconds left, he went back to the line, again taking roughly 10 seconds before each shot. He made both to give the Bucks a 106-99 lead, unfazed by fans loudly (and a bit briskly) counting off seconds as he prepared to shoot.

“It is what it is,” Antetokounmpo said.