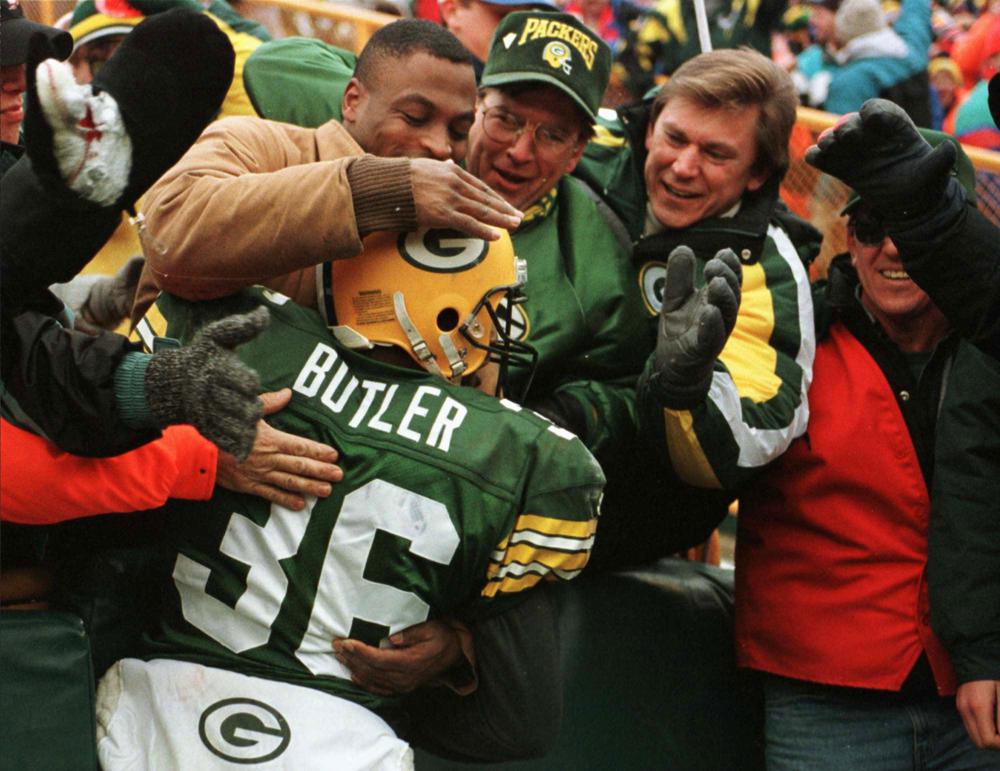 Growing up in a rough-and-tumble Jacksonville housing project, LeRoy Butler wore hand-me-down clothes, what he calls his “Forrest Gump” leg braces and a constant smile.

His grandmother, Rosa Lee Durham, used to tell him that his gift from God was his uncanny ability to “ignore anything negative” such as getting teased for daring to dream about playing in the NFL when he couldn’t even walk straight or having to stay indoors when his siblings went outside to play.

When that happened, Butler would retreat to the kitchen where his mother, Eunice O. Butler, imparted both the secrets of the family’s favorite recipes and how to handle neighborhood bullies.

The man who would become best known as the originator of the ”Lambeau Leap,” and who will be inducted into the Pro Football Hall of Fame this weekend spent much of his youth in a wheelchair, braces or casts. The bones in his feet were so weak and misaligned that he could only walk for short distances and he couldn’t run.

Being severely pigeon-toed meant he was constantly picked on by other kids who never picked him when choosing sides during recess.

By the time he was in seventh grade, however, Butler’s legs had healed and by high school the lessons he learned from his mother about patience, pluck and perseverance had begun to pay off as he overcame his childhood challenges, which included a reading disorder, to earn a scholarship from Bobby Bowden at Florida State.

In 1990, after starring for the Seminoles, Butler received a call from Packers coach Lindy Infante during the second round of the NFL draft. Infante told Butler they were going to select him and did he have any questions?

“I do have one, Coach,” replied Butler. “Where’s Green Bay?”

Butler would soon be joined by Reggie White, Brett Favre, Ron Wolf and Mike Holmgren and together they put Green Bay back on the NFL map.

Butler was key to restoring Green Bay’s glory days during a 12-year career that featured four All-Pro selections and landed him on the league’s All-Decade team of the 1990s, and his versatility put him at the vanguard of a shift in the way safeties are used in today’s game.

To disguise the defense’s intentions and maintain an ability to stop the pass or the run on later downs, coordinators Ray Rhodes and later Fritz Shurmur would stick with their base defense when opponents sent extra receivers onto the field. They would then have Butler cover either the slot wideout or top tight end and occasionally blitz the stumped quarterback.

This took Butler’s game to another level, which kindled the notion that he was one of the greatest ever to play his position.

Butler was selected for the Hall in his 16th year of eligibility, his third as a finalist.

A few years before her death in 2016, his mother helped Butler write the acceptance speech that he’ll deliver at his induction ceremony in Canton, Ohio, on Saturday.

“She taught me a long line of things,” Butler said. “(When) you have a special needs kid who can’t go outside, can’t go swimming, can’t do sleepovers, you’ve got to be a patient person.”

That’s why Butler said he never fretted about his long wait for his enshrinement.

Butler’s football career came to a premature end on Nov. 18, 2001, when he broke his left scapula while tackling Atlanta’s Maurice Smith, leaving him 16 games shy of breaking Bart Starr’s record of 196 games played with the Packers.

He fell just short of becoming the first player in NFL history to finish his career with 40 interceptions and 20 sacks.

Although he won a Super Bowl and reached another, Butler was best known for what he did in a game in December 1993 against the Raiders.

Butler forced a fumble by running back Randy Jordan that Reggie White recovered and lumbered with for 10 yards before pitching it to Butler, who raced down the sideline to score his first career touchdown, which he celebrated by jumping into the stands.

“Mike Holmgren always said, if you get a fumble and you’re a defensive player, don’t lateral the ball,” Butler recounted. “But Reggie wanted to do it. And it’s Reggie White, right?

“So Reggie laterals the ball, I’m running down the sideline, and it’s all spontaneous. And when I jumped up there, and the hugging, the best fans — I take that back, they’re owners — that was my way of loving the fans.”

The “Lambeau Leap″ became an entrenched tradition following touchdowns as the Packers morphed from persistent also-rans to a perennial playoff team over the past quarter century, winning two Super Bowls and reaching another.

Former Broncos safety Steve Atwater, whose stellar play in Super Bowl 32 denied Butler a second ring, is another member of the 1990s All-Decade team who had an interminable wait for enshrinement.

Atwater said that when he finally made it in 2020, the first thought that crossed his mind was holding the door open for Butler.

“He’s one guy I’m really looking forward to welcoming in,” Atwater said. “He was a playmaker. I remember watching him when he was at Florida State, just being amazed at the tackles he made, the interceptions. He was all over the field. And he did that same thing in Green Bay.”

It’s not only Butler’s long wait but how far he came, Atwater said.

“I think all of us overcome some adversity, but that’s just a whole other level there,” Atwater said. “To not get picked for teams because of the situation with his legs and then to overcome that — even the mental part of it, you’ve got to be so strong mentally — and play at the high level he played at is amazing.”

TOP PHOTO: FILE – Green Bay Packers’ LeRoy Butler jumps into the crowd following an interception late in the fourth quarter of their game against the Chicago Bears in Green Bay, Wisc., on Nov. 12, 1995. After starring for the Seminoles, Butler helped recast the safety position in the NFL and restore Green Bay’s glory days during a 12-year career that featured five All-Pro selections and landed him in the Pro Football Hall of Fame’s Class of 2022. (AP Photo/Dan Currier, File)