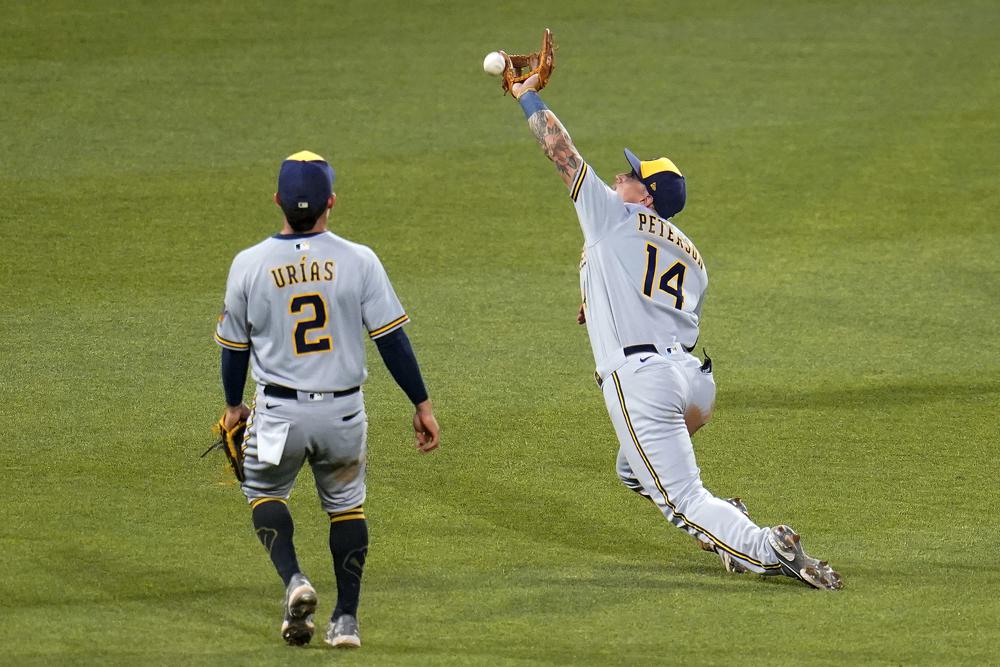 It was the first multi-homer game of Perez’s five-year career. He also doubled his season home run total.

Perez hit a two-run blast in the fourth inning off Brent Suter (1-2) to break a 3-3 tie. He added another two-run homer in the sixth to make it 6-4 before connecting again for a solo shot in the eighth to increase the lead to 8-4.

“Three really good swings,” Pittsburgh manager Derek Shelton said. “He didn’t miss any of them. He got all of them. The thing is, we needed every one of them. What a great night for him.”

The outburst came one day after the Pirates’ Bryan Reynolds had a three-homer game in a win at Washington. Suwinski homered three times June 19 in a victory over San Francisco.

The Pirates had three players have three-homer games in the same month for the first time in the franchise’s 140-year history.

“Hopefully, it’s a contagious bug of three-homer games that is going around,” winning pitcher JT Brubaker said with a smile. “I’m happy for Mikey. He always does a good job behind the plate, and I think a night like this made it easier for him to call the game.”

Perez went 4 for 5 to set a career-high for hits and raise his batting average to .169. He finished with five RBIs as the Pirates ended their eight-game losing streak against Milwaukee that dated to last season.

“I always believe in myself, that I can do my best every day,” Perez said. “To be a part of this and the win, it feels good.”

The Brewers scored three runs in the ninth inning to pull to 8-7. Willy Adames hit an RBI double, Rowdy Tellez drove in a run with a ground out and Kolten Wong hit a two-out run-scoring single off diving first baseman Michael Chavis.

Rookie Yerry De Los Santos then relieved closer David Bednar with runners on first and third and retired Luis Urias on a pop fly for his second career save, both coming in the last two days.

Cruz and Suwinski homered in the second inning to put the Pirates ahead 3-0. They became the first Pittsburgh rookies to go back-to-back since Brandon Moss and Andy LaRoche in 2008.

Pittsburgh finished June with 44 homers, its most in a calendar month since 2007.

Andrew McCutchen had two doubles among his three hits while driving in two runs but couldn’t keep the NL Central-leading Brewers’ four-game winning streak from ending. The 2013 NL MVP is hitting .350 in his last 22 games following a 1-for-40 slide.

Brewers starter Adrian Houser left the game with right elbow tightness in the third inning. He was charged with three runs in 2 1/3 innings.

Houser said the initial tests taken of the elbow were encouraging. He will undergo an MRI on Friday in Milwaukee.

“Hopefully, I’ll be back in a couple of days, just get the inflammation out of there and be ready to go,” Houser said.

After walking Daniel Vogelbach with one out, Houser was visited on the mound by manager Craig Counsell and an athletic trainer. Houser then left following a brief conversation and was relieved by Suter.

After the Pirates went ahead 3-0 on the back-to-back homers off Houser, the Brewers rallied to tie the score. Yelich tripled home a run and scored on Adames’ groundout in the third inning and Omar Narvaez hit an RBI double in the fourth.

Perez’s first homer put the Pirates ahead for good and his second, which came off Jason Alexander, gave them cushion after Luis Urias’ groundout in the sixth got the Brewers within a run. Perez then put the capper on his big game by connecting against Jandel Gustave.

All three home runs carried into the right-field stands.

Brewers: Rookie LHP Aaron Ashby (left forearm inflammation) is on track to be activated from the injured list to start Saturday against the Pirates. … CF Jonathan Davis (back/ribs) was not in the lineup after making a spectacular diving catch Wednesday in a win over Tampa Bay. He was available off the bench in an emergency.

Pirates: INF/OF Tucupita Marcano was activated from the COVID-19 IL and INF Yu Chang was designated for assignment after hitting .167 with one home run in 18 games. … Bednar had not pitched Saturday because of lower back stiffness.

Pirates: RHP Roansy Contreras (2-1, 2.76) has the best ERA in the major leagues among rookies who have made at least seven starts this season.

More AP MLB coverage: https://apnews.com/hub/MLB and https://twitter.com/AP_SportsMIL 6-0 vs. PIT, eight in a row.