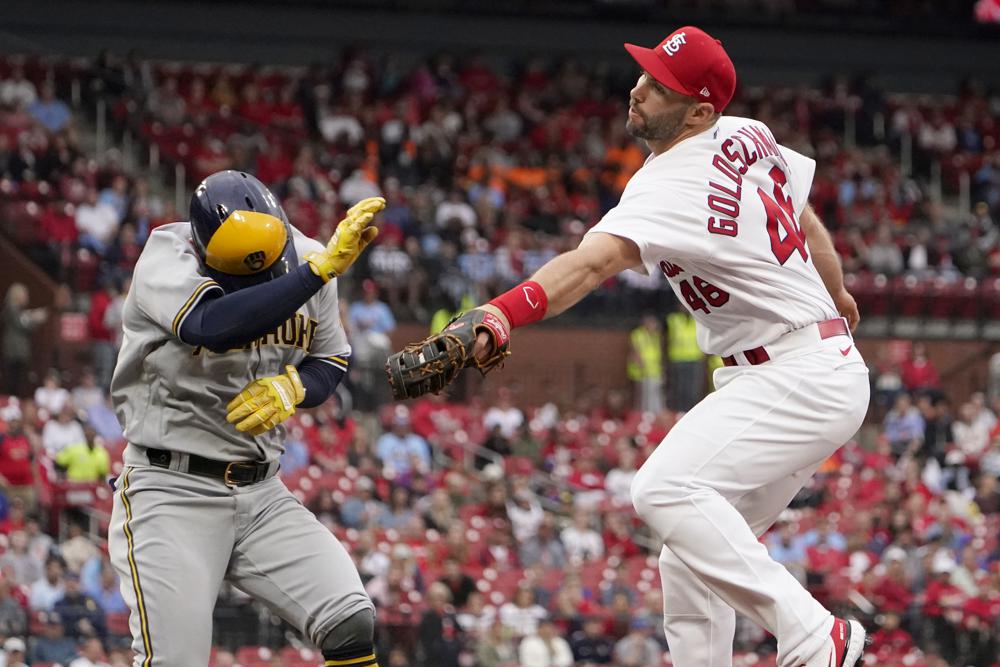 Tyrone Taylor drove in a run for the seventh game game in a row and Luis Urías homered as the NL Central leaders increased their edge over the second-place Cardinals to 4 1/2 games.

“They definitely made me work and I had to grind for some pitches,” Hader said. “Fastball wasn’t locating the way I like it to, but at the end of the day I made the pitches when I needed to.”

Paul Goldschmidt homered and extended his hitting streak to 17 games for the Cardinals.

Hader, activated from the family medical emergency list earlier in the day, earned his 16th save in 16 tries this season. He gave up a leadoff single to Tommy Edman in the ninth and a one-out walk to Nolan Arenado before retiring Albert Pujols on a foul popup and Juan Yepez on a popout.

It marked Hader’s 30th consecutive save conversion. He hasn’t allowed a run since last July.

Lauer (5-1) gave up two runs on four hits in the first two innings. His only blemish in his final three frames was a walk. He struck out one and walked four, throwing 96 pitches over five innings.

“It was like two different games,” Brewers manager Craig Counsell said. “I think he was at 58 pitches through two and only gives up two runs. Then he was very, very good the next three innings.”

Urías hit his fourth homer of the season, connecting with one out in the first off Adam Wainwright (5-4).

One out later, Andrew McCutchen hit the first of three consecutive singles by the Brewers and scored on Taylor’s hit.

Christian Yelich drove in a run in the second and McCutchen had an RBI hit in the fourth.

Wainwright gave up 10 hits and four runs in five innings with three of the Brewers’ runs coming with two outs. He dropped a decision for the first time in four games.

“It bugs me a lot,” said Wainwright, who surrendered four two-out runs in a 5-1 loss at Milwaukee on April 14. “I just got to do a better job with two outs. They’re doing a good job with their two-out approach on me too.”

Goldschmidt hit his eighth home run, a solo drive in the seventh off Trevor Gott that made it 4-3. He also singled and his hitting .457 with six homers during his streak.

The Cardinals scored twice in the first. Edman doubled for the first of his three hits, Pujols had an RBI single and Yepez had a sacrifice fly.

When Goldschmidt walked in the first, he extended his streak of reaching base to 31 consecutive games, the longest in the majors this year. It’s the longest streak for St. Louis since Matt Carpenter reached in 35 straight in 2018.

Along with Tellez’s five grabs, catcher Omar Narváez and third baseman Jace Peterson each caught one foul ball for an out.

Brewers: RHP Brandon Woodruff (5-2, 4.76) goes for his third consecutive win and his second against the Cardinals this year. He gave up three hits over five innings to get the win in a 5-1 win April 14 in Milwaukee.

Cardinals: RHP Dakota Hudson (3-2, 3.60) seeks his second win in his fifth start of May, during which he’s only made it out of the fifth inning once. He took the loss at Milwaukee on April 17, giving up four runs (three earned) on three hits in just three innings as the Brewers won 6-5.

TOP PHOTO: Milwaukee Brewers’ Luis Urias, left, is safe at first as he avoids the tag from St. Louis Cardinals first baseman Paul Goldschmidt during the second inning of a baseball game Thursday, May 26, 2022, in St. Louis. Cardinals shortstop Edmundo Sosa was charged with a throwing error on the play. (AP Photo/Jeff Roberson)