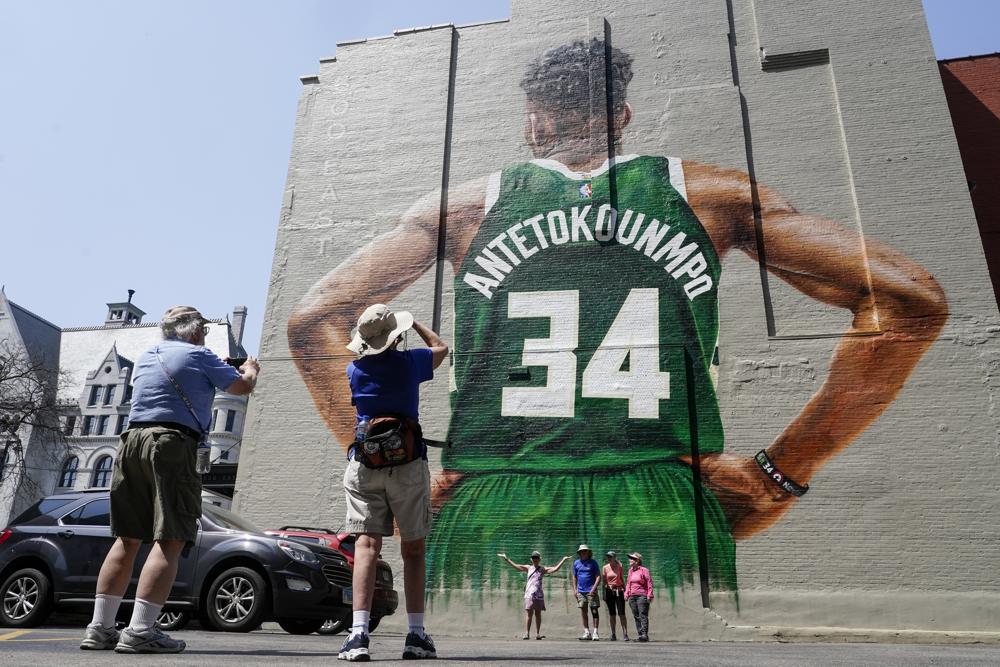 MILWAUKEE (AP) — Giannis Antetokounmpo is featured in a mural that will give the two-time NBA MVP a larger-than-life presence over downtown Milwaukee all year long.

The mural is 53½ feet high and 56½ feet wide, covering the side of a three-story building. It shows the back of Antetokounmpo in a Milwaukee Bucks jersey with his hands on his hips.

Mauricio Ramirez, who produced the mural, signed his work Friday, several hours before Antetokounmpo led the Bucks into Game 6 of their Eastern Conference semifinal with the Boston Celtics.

Ramirez, who specializes in murals and has multiple pieces on display around Milwaukee, said he had thought for years about producing something to honor Antetokounmpo. The 6-foot-11 forward led the Bucks to their first NBA championship in a half-century last year, scoring 50 points in the title-clinching Game 6 victory over the Phoenix Suns.

“I thought it would be awesome to do a proper Giannis mural, not one in the alley, not one on the side of a convenience store,” Ramirez said. “We wanted to do one where we gave him good visibility, because he gave the city of Milwaukee visibility.”

Dan Nelson Jr., a longtime Bucks season-ticket holder and the owner of the 600 East building on Milwaukee’s Wisconsin Avenue, granted permission to have the mural go on the side of that structure. Ramirez began working on it April 25.

Hundreds of fans gathered for a ceremony celebrating the mural’s completion, with many of them posing for selfies in front of it.

Antetokounmpo wasn’t at the event as he prepared for Game 6, but he has said how much he appreciates the mural’s existence.

“It’s amazing,” Antetokounmpo said after a recent playoff game. “When you play basketball, you never expect things like that to happen. You just play basketball because you love the game and you enjoy the game. I feel like once you dedicate yourself to the team and to the city, people feel that. They appreciate it, and things like that happen.”

Milwaukee Mayor Cavalier Johnson attended Friday’s ceremony and said the mural was “a new reminder of who we are as a city and nation” and showed how “the American dream is alive and well.”

Antetokounmpo grew up amid poverty in Greece before coming to Milwaukee as the 15th pick in the 2013 draft and developing into one of the game’s top players. He signed a supermax extension with the Bucks in December 2020 rather than becoming an unrestricted free agent at the end of the 2020-21 season.

Seven months after signing that extension, Antetokounmpo was named MVP of the NBA Finals after leading the Bucks to a championship.

“He was proud to do it the hard way,” Johnson said. “That’s how we do it in cities like Milwaukee.”

TOP PHOTO: FILE – Fans take pictures of a mural of Milwaukee Bucks’ Giannis Antetokounmpo painted on the side of a building Thursday, May 12, 2022, in Milwaukee. The mural will be dedicated on Friday, May 13, 2022, before Game 6 of the NBA Eastern Conference semifinal game between the Milwaukee Bucks and the Boston Celtics. (AP Photo/Morry Gash)