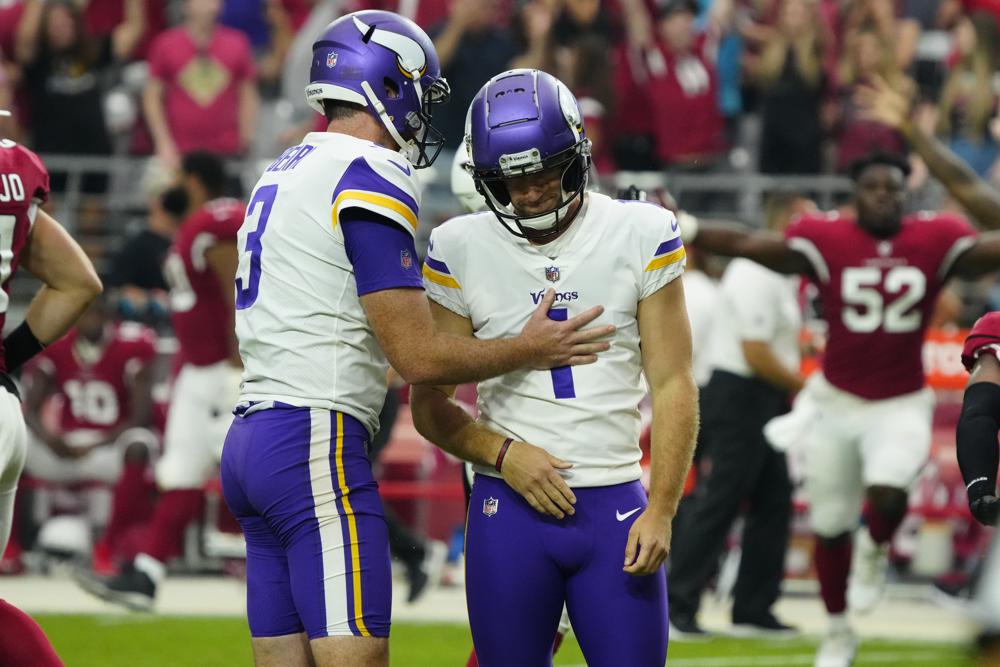 MINNEAPOLIS (AP) — The Minnesota Vikings haven’t given up on Greg Joseph. He said he’s still confident in himself, too.

After a second straight excruciating loss, thanks to the latest miss on a late-game kick for this seemingly star-crossed franchise, the Vikings have some heavy lifting to do to keep their season from veering off track like Joseph’s 37-yard field-goal try that went wide right in Arizona.

The Minnesota Vikings are home Sunday against the Seattle Seahawks.
Pregame with Paul Allen on KQ98 begins at 2:30 p.m. Kickoff at 3:25 p.m. Listen on 98.3 FM

“That wasn’t the reason why we lost the game,” coach Mike Zimmer said, reflecting on the 34-33 defeat that also included a missed extra point.

Joseph, perplexingly, made two 52-yarders on Sunday. He was also good from 53 yards the week before in Cincinnati to send that game to overtime.

“Lots of kickers miss field goals. Let’s give the kid a break, OK?” said Zimmer, who has rarely expressed patience with his specialists and is coaching a fifth kicker in eight years with Minnesota.

Joseph said he clipped the ground on his approach on the extra point in the second quarter, a hiccup that slowed his hips on the follow-through of that kick that also went wide right.

Teammates from Dalvin Cook to Kirk Cousins to Adam Thielen encouraged Joseph in the locker room after the final-play failure, a kick he said “felt good” off his foot.

“That moment, no one felt that more than me. But it’s part of the job I signed up for. It’s part of an NFL kicker’s career,” Joseph said, adding: “This one kick does not define me as a human or as an athlete. It can be a make or break in the career-type deal, but I promise this is not going to break me. This is only going to propel me.”

The Vikings were better than they played against the Bengals in several areas against a Cardinals team that looks like a contender with quarterback Kyler Murray, yet still stuck with another loss.

“It’s going to turn for us. Just have to continue to lean on one another and continue to believe in our coaching staff and the game plan that they put together for us every week,” cornerback Patrick Peterson said. “Just have to go out and execute at an all-time high because you never know what play is going to cost you the game.”

Cousins is eighth in the NFL with a 112.9 passer rating that would be a career best for a full season, having adjusted to the loss of tight end Irv Smith Jr. by turning K.J. Osborn into a legitimate third option behind Justin Jefferson and Thielen. Osborn has 12 catches for a team-high 167 yards.

The Vikings have allowed eight passes of 20-plus yards through two games. Only five teams in the league have surrendered more. Some of the breakdowns have been assignment-related, others more attributable to sheer talent of the opponent.

The longest gain on Sunday was the most crushing: a 77-yard touchdown reception by Rondale Moore with 1:33 left before halftime that gave the Cardinals their first lead at 21-20. Zimmer sent linebacker Eric Kendricks as an extra rusher on a zone blitz, and a mixup in the coverage — apparently between safety Xavier Woods and cornerback Patrick Peterson — left Moore wide open.

“Kyler Murray did a great job of getting outside of the pocket and making that throw,” Woods said.

Cousins, who has yet to commit a turnover, gave his beleaguered offensive line a much better chance to succeed by delivering quicker throws and consistently avoiding the rush. He took only one sack and even extended two touchdown drives with scrambles for first downs, including a career-long 29-yard gain.

“Kirk played an unbelievable game. Yeah, I think we did some good things up front, but Kirk also did a great job using his feet when he needed to, getting the ball out,” center Garrett Bradbury said.

Linebacker Anthony Barr was held out again with a knee injury, his 16th straight missed game after a torn pectoral muscle wiped out almost all of his 2020 season. The big contract the Vikings squeezed under their salary cap in 2019 for Barr has not paid off, particularly considering how capable his substitutes have proved to be.

After Eric Wilson played well last year, Nick Vigil has been a standout this season at the strong side spot. He returned an interception for a touchdown at Arizona and would have been credited with a fumble recovery near the goal line had he been able to tap a second foot down before stepping out.

Cook sprained his right ankle when a tackle by J.J. Watt ended a short gain in the fourth quarter. He carried the ball three more times after that for 14 yards but was moving gingerly after those runs.

Bashaud Breeland hurt his back late in the second quarter, but he played through most of the second half. Cameron Dantzler took his place during a fourth-quarter drive and knocked down a pass in the end zone to force the Cardinals to kick a field goal.

Backup defensive end Everson Griffen joined Barr on the inactive list, because of a concussion suffered in a car crash last week when he swerved to avoid a deer on the way to the practice facility.

The Vikings get three straight home games with friendly crowd noise to boost their defense, needing to start a winning streak to keep their bid for the playoffs viable. Any lesson learned from facing a dangerous scrambler such as Murray ought to help this Sunday against Russell Wilson and Seattle. Wilson is 7-0 in his career against Minnesota; five of the wins have come against Zimmer.