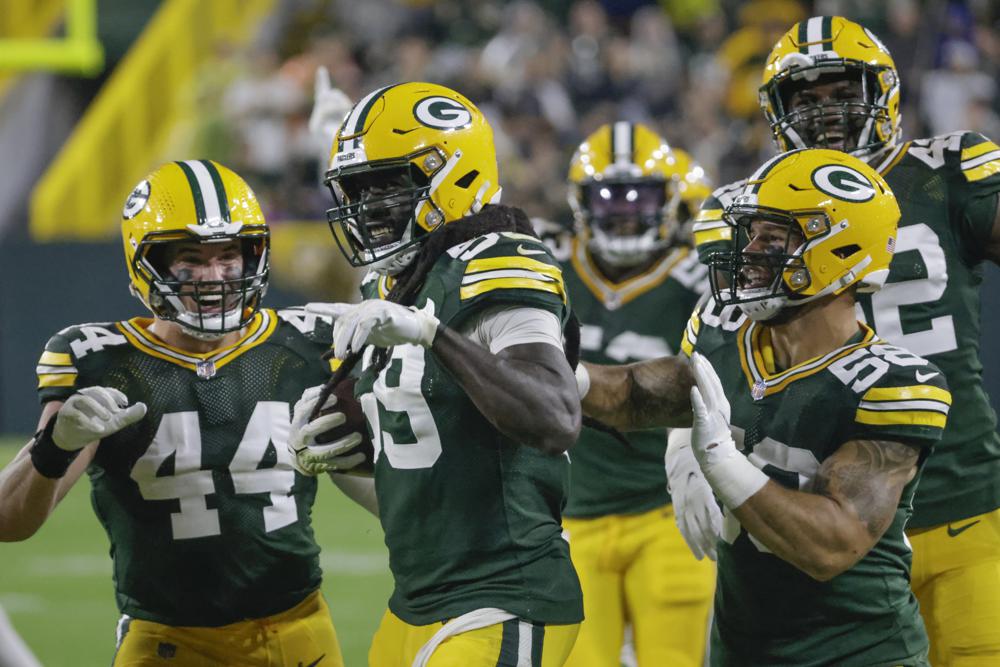 Defense remains much more of a question.

After giving up 55 points in the first six quarters of the season, Green Bay’s defense showed signs of life on Monday night in a 35-17 victory over the Detroit Lions. The Packers forced two turnovers and held the Lions scoreless during a dominant second-half performance.

“This is a step in the right direction,” Packers linebacker De’Vondre Campbell said after a game in which he had 13 tackles and an interception. “We’ve just got to continue to keep building and continue to keep stacking. The sky’s the limit for us.”

Of course, the Packers (1-1) were facing a Detroit team that has gone 14-35-1 since 2018. It’s too early to tell whether they achieved a breakthrough or simply benefited from facing an inferior opponent.

If nothing else, the Packers showed there’s no reason to panic as they adapt to new defensive coordinator Joe Barry while playing without injured Pro Bowl pass rusher Za’Darius Smith, who will miss at least two more games because of a back issue.

“I think in that second half, we went out there and displayed everything we needed to,” linebacker Krys Barnes said. “We played fast, hard and physical.”

But there was plenty of reason to worry early on, as Detroit’s Jared Goff completed 13 of his first 14 passes while helping the Lions (0-2) grab a 17-14 halftime lead.

“I think we did make some necessary adjustments at halftime,” Packers coach Matt LaFleur said after the game. “One of the things certainly I talked to Joe about was either play coverage, or we have to pressure, because when we were doing our four-man rushes and playing man coverages behind it, we weren’t getting to the quarterback.”

The Packers still have only one sack this season, but they did bother Goff in the second half. Green Bay’s relative lack of a pass rush remains concerning as the Packers prepare to visit the San Francisco 49ers (2-0) on Sunday night.

“When you’re talking about (missing) one of, in my opinion, one of the premier pass rushers in this league and a guy that’s been very, very disruptive, you’ve got to find different ways to manufacture that rush,” LaFleur said Tuesday.

“Whether that’s sending pressure or you’ve just got to play coverage behind it and hope that you can take away the quarterback’s reads and either make him check the ball down or he’ll hold it too long and the rush will hit home.”

After failing to reach the end zone in a 38-3 season-opening loss to New Orleans, the Packers showed their offense hasn’t taken a step back from last year, when they scored a league-high 31.8 points per game. If you throw out a possession in which Green Bay got the ball with just 3 seconds before halftime and took a knee, the Packers scored touchdowns on five of their first six series.

RB Aaron Jones scored four touchdowns (three receiving, one rushing) to tie the Lambeau Field single-game record. The previous person to score four touchdowns at Lambeau was Carolina’s DeAngelo Williams in 2008. Jones also was able to reclaim the necklace honoring his late father that he lost during the game. Packers head athletic trainer Bryan “Flea” Engel found it. … CB Eric Stokes may be ready for a bigger role. The rookie first-round pick from Georgia had the coverage on Goff’s fourth-and-1 incompletion to Quintez Cephus from the Green Bay 25 with the Packers leading 21-17 in the third quarter.

TE Jace Sternberger has been released. The 2019 third-round draft pick was suspended without pay for the first two games of the season for violating the league’s substance abuse policy. … OG Lucas Patrick was active for Monday’s game after spending the week in concussion protocol, but Jon Runyan Jr. started ahead of him at left guard. “We’ll look at it on a week-to-week basis,” LaFleur said. “We’re always trying to get the best five out there.”

DB Chandon Sullivan was shaken up in the closing minutes of the game. LaFleur said Tuesday that Sullivan should be OK.

51,633: Rodgers’ career total in passing yardage. His 255-yard performance Monday moved him ahead of John Elway and put him in 10th place.

The Packers have a short week to prepare for the 49ers as they visit San Francisco for the fourth time in the past three seasons.