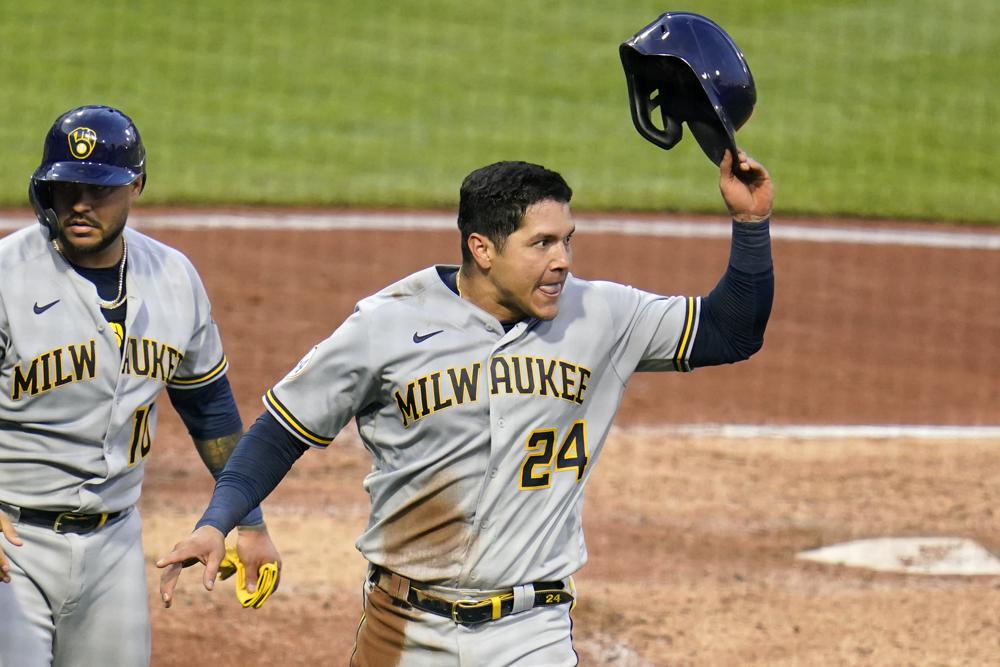 Cain’s hit in the fourth inning pushed the Brewers’ lead to 3-0. Urias’ double came during a three-run sixth that made it 6-0.

“When we had opportunities to score, they were pressure opportunities and we made the most of it with the guys coming up with some really big hits,” Milwaukee manager Craig Counsell said.

Pirates rookie Rodolfo Castro became the first player in major league history to have his first five hits all be home runs after hitting two more long balls on Wednesday. The switch-hitting Castro surpassed the mark set by Trevor Story in 2016 with the Colorado Rockies.

“I don’t really think it’s sustainable, but if he wants to try, he can try,” Pirates manager Derek Shelton joked. “He continues to take good, aggressive swings. It’s something we saw him do in (Double-A) Altoona this year, but it’s very impressive.”

Houser (7-5) allowed two hits while striking out two and walking one.

“Adrian was really sharp,” Counsell said. “He was in control of the game from the outset. I definitely saw a crispness to his game.”

Houser is 4-0 in his last 11 starts and the Brewers have won each of his last eight outings.

“Having the team win the game, that’s the goal,” Houser said. “Go out there, go as deep as you can, come off mound with the lead, give your team a chance to win the ballgame.”

Avisail Garcia had three hits for the NL Central-leading Brewers, who have won four of five. Omar Narvaez and Tyrone Taylor added two hits each.

Pirates rookie Max Kranick (1-2) was tagged for six runs and 10 hits in five-plus inning in his fourth major league start. Kranick pitched five perfect innings against St. Louis on June 27 in his debut but has since given up 13 runs in 11 innings.

Rookie Ke’Bryan Hayes had two of the Pirates’ six hits.

Garcia opened the scoring with an RBI single in the first and Cain’s double to the wall in right-center three innings later made it 3-0. Following Urias’ double in the sixth, Kolten Wong hit a sacrifice fly.

Taylor’s RBI single in the seventh pushed Milwaukee’s lead to 7-0.

The Brewers acquired All-Star third baseman Eduardo Escobar from Arizona for two prospects in a trade completed during Wednesday’s game.

The 32-year-old Escobar made his first All-Star game this season and is batting .246 with 22 homers. The switch-hitter should be a valuable and versatile piece and could wind up getting significant playing time at first base, a position he has not played in the major leagues.

“We feel we can put a tough lineup out there every single night,” Counsell said. “The acquisition of Escobar lets us do that.”

Pirates: RHP Trevor Cahill is out indefinitely after sustaining a broken right foot last Friday when he slipped on the steps at Oracle Park in San Francisco. Cahill was already on the injured list with a left calf strain …. RHP Chase DeJong underwent surgery to repair damaged cartilage in his left knee Tuesday and will miss the remainder of the season. … OF Ka’ai Tom (low back strain) has resumed baseball activities … LHP Sam Howard (right hamstring strain) is throwing at 90 feet.

Opponents are batting just .129 against Peralta this season. Kuhl is 3-1 with a 2.48 ERA in his last six starts.

0
0   0
previous Column: For Biles, it finally all becomes too much
next Brewers add All-Star 3B Escobar in trade with Diamondbacks
Related Posts