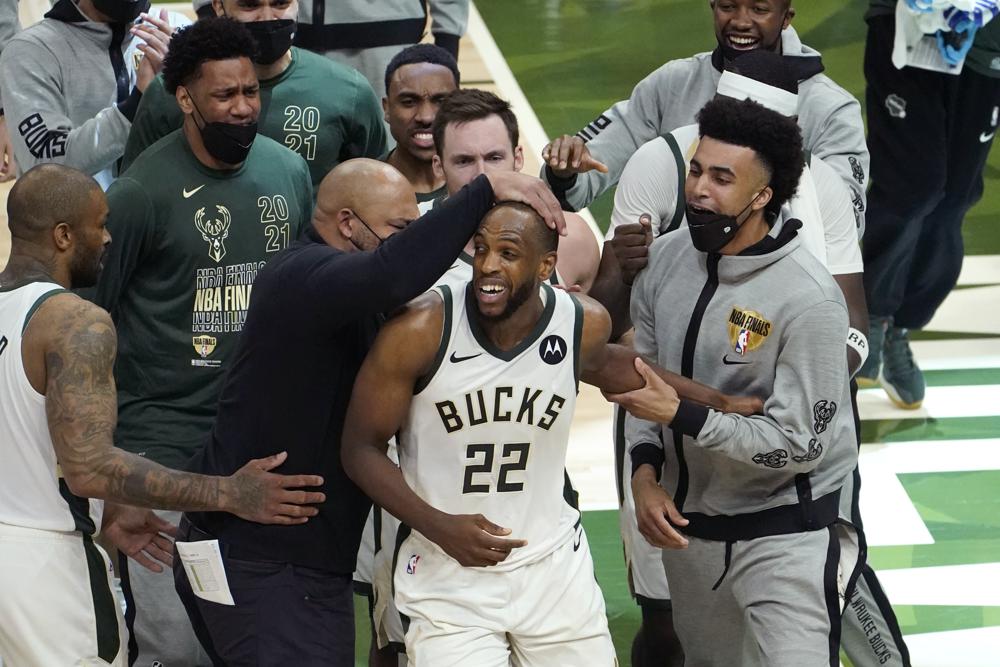 Devin Booker, Khris Middleton and Jrue Holiday — the trio of U.S. Olympians who were in the NBA Finals and therefore have not been around their Tokyo Games teammates — arrived in Japan on Saturday night, less than 24 hours before the Americans’ scheduled Olympic opener against France.

How much they play on Sunday remains unclear. U.S. coach Gregg Popovich has said he would gauge their role based on how they were feeling after the flights.

“You’re talking about three true professionals, three extremely, extremely competitive guys that wouldn’t be on their way here if this didn’t mean something,” U.S. forward Draymond Green said Saturday. “They all just finished competing in the NBA Finals, just finished completing an NBA season. … I have a lot of respect for those guys for not only committing to do this but actually keeping their word.”

Middleton and Holiday initially flew from Milwaukee to Seattle on Friday evening, making that trip a day after the Bucks had their championship parade to celebrate topping Phoenix in six games for the NBA title. Booker flew from Phoenix to Seattle, getting there Friday night a few minutes after the Bucks arrived.

Booker hopped on the plane with Middleton and Holiday, and it took them about nine hours to get from Seattle to Tokyo. They landed shortly before 11 p.m. local time Saturday, or about 22 hours before the U.S.-France game is scheduled to begin.

“I have a tremendous amount of respect for those guys for seeing it through, seeing their commitment through,” Green said. “And it’s on us to make sure that we do our parts and making sure that they are rewarded with what with what they ultimately came here for, which is to help us compete and win a gold medal.”

It has been an unprecedented period of preparation for the U.S. men in their quest to win a fourth consecutive Olympic gold medal. The 12-player team was formally unveiled on June 28; since then, Bradley Beal (virus-related) and Kevin Love (injury-related) were removed from the roster, replaced by Keldon Johnson and JaVale McGee.

The three NBA Finals players have been gone, and U.S. wing Zach LaVine missed the team’s flight to Tokyo on Monday because he was in the health and safety protocols related to the coronavirus. After a number of negative test results was cleared to fly over separately and rejoined the team in time for opening ceremony and Saturday’s practice.

Like Green, LaVine said he believes the decision by the NBA Finals trio to come to Tokyo barely a few days after the series and long postseason run ended only speaks to their level commitment.

“I think they’ll be ready to go, and we’ll see what happens,” LaVine said. “But as for the team, I think we have to be ready for everything. If they’re not ready to go, then we have to go out there and perform still.”

The U.S. wasn’t the only team pulling off a last-second roster maneuver. Spain, which ruled Juancho Hernangomez of the Minnesota Timberwolves out of the Olympics earlier this month because of a dislocated shoulder — only to then put him on the Tokyo roster because it felt he was healing well ahead of schedule — announced that he is not playing after all.

Jorge Garbajosa, the president of Spain’s basketball federation, said the Timberwolves would not clear Hernangomez and forced the reigning World Cup champions to replace him. Spain said Xabi Lopez-Arostegui was on his way to Tokyo to take the roster spot.