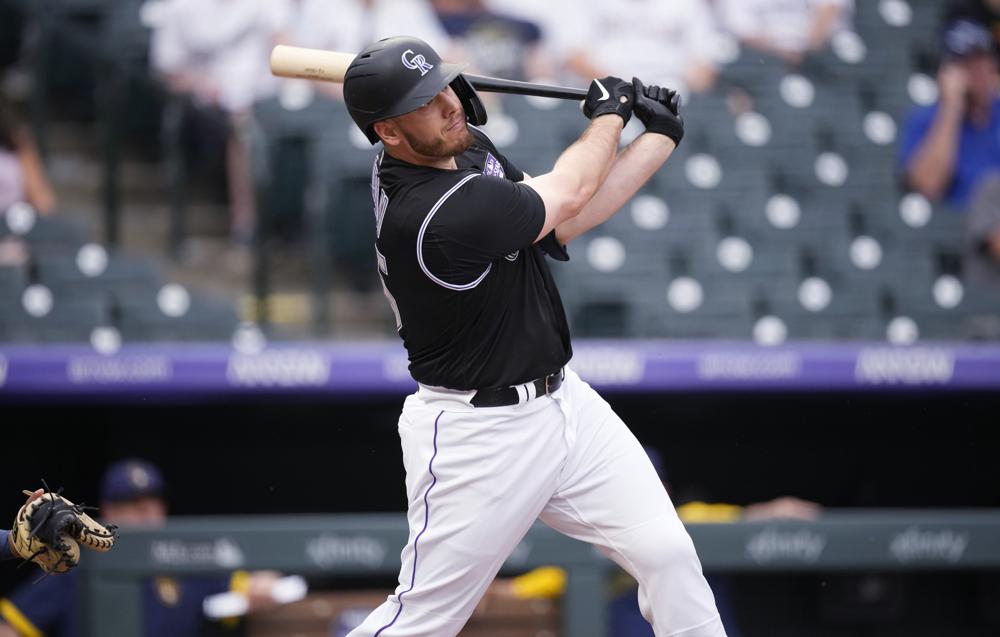 Garrett Hampson followed Cron’s slam with a homer, and Raimel Tapia extended his hitting streak to a career-best 14 games with an RBI single in the sixth. “It’s been a great four games,” Cron said. “Coming off that (1-5) road trip we needed to come back here strong. There’s something about this ballpark that we feel super comfortable in and it’s nice to see the offense roll with everybody contributing. We’re scoring a lot of runs and our pitchers are doing a great job.”

Milwaukee committed four errors, one of which led to an unearned run in the sixth, and lost its fourth in a row.

“It wasn’t a pretty defensive game for sure,” manager Craig Counsell said.

Christian Yelich beat out an infield single leading off the fourth for the lone hit against Márquez (5-6). Luis Urias had a three-run double in the seventh off Yency Almonte, who relieved Ben Bowden after he issued three walks to load the bases.

Márquez had to deal with plenty of traffic on the bases after walking three and throwing a pair of wild pitches, including one that rolled to the backstop on a swinging third strike that allowed Jackie Bradley Jr. to reach in the fifth inning. But a Colorado defense that committed three errors also turned three double plays to help Márquez dodge damage. “Honestly, he wasn’t really sharp,” Rockies manager Bud Black said. “His fastball command was spotty. He couldn’t really locate the fastball. The breaking ball got better as the game went on. But he did throw enough quality pitches to record the outs and he got some double play balls that helped him. But I’ve seen him better, honestly. One hit, three walks in six innings, you’d think I’d be praising him but I have high expectations for him. I have high expectations for all of our guys.”

Brandon Woodruff (5-3) went five innings and allowed five hits and five runs, all in the first.

Yonathan Daza and Trevor Story singled and Ryan McMahon walked to load the bases before Cron drove a 1-1 pitch into the right-field seats for his third career slam. Hampson followed with a homer that soared into the left-field bleachers. “He made a pitch to Cron that unfortunately got out over the plate, that he got up in the air,” Counsell said. “He hit it pretty good. (Woodruff) was pretty good after that. He cruised through the next three innings. We made some defensive mistakes in the fifth but we got out of it. It’s just a case where a bad inning kind of got us.” POWER SURGE

Cron has three home runs in four games since Monday, snapping a 21-game homerless streak that was the fourth-longest of his career.

“I don’t think I’ve been hitting as many home runs or driving the ball as much as I need to be in the middle of the order. So to get a few here on the homestand has been nice,” Cron said. “It felt good. Glad to contribute.”

Brewers: 2B Kolten Wong went through a full range of baseball activities before the game. Barring any setbacks, he could soon be reinstated from the injured list — perhaps this weekend. “We’re close,” Counsell said. Wong, the Brewers’ leadoff batter and a two-time Gold Glove winner with St. Louis, went on the IL on June 4 with a left oblique strain.

Rockies: RHP Mychal Givens has been placed on the 10-day injured list with a lower back strain, and RHP Justin Lawrence was recalled from Triple-A Albuquerque to fill the roster spot. Black said Givens, a mainstay in the bullpen, has been dealing with back soreness for some time. “It was getting to the point where it was nagging, and the medical team and Mychal felt probably the best thing to do was put him on the IL, let it quiet down, and when he comes back, there will be no issues,” Black explained.

Brewers: RHP Corbin Burnes (3-4, 2.27 ERA) is slated to make his first career start Friday night at Coors Field. He has gone 1-1 with a 9.00 ERA in four previous appearances at the ballpark, all in relief.