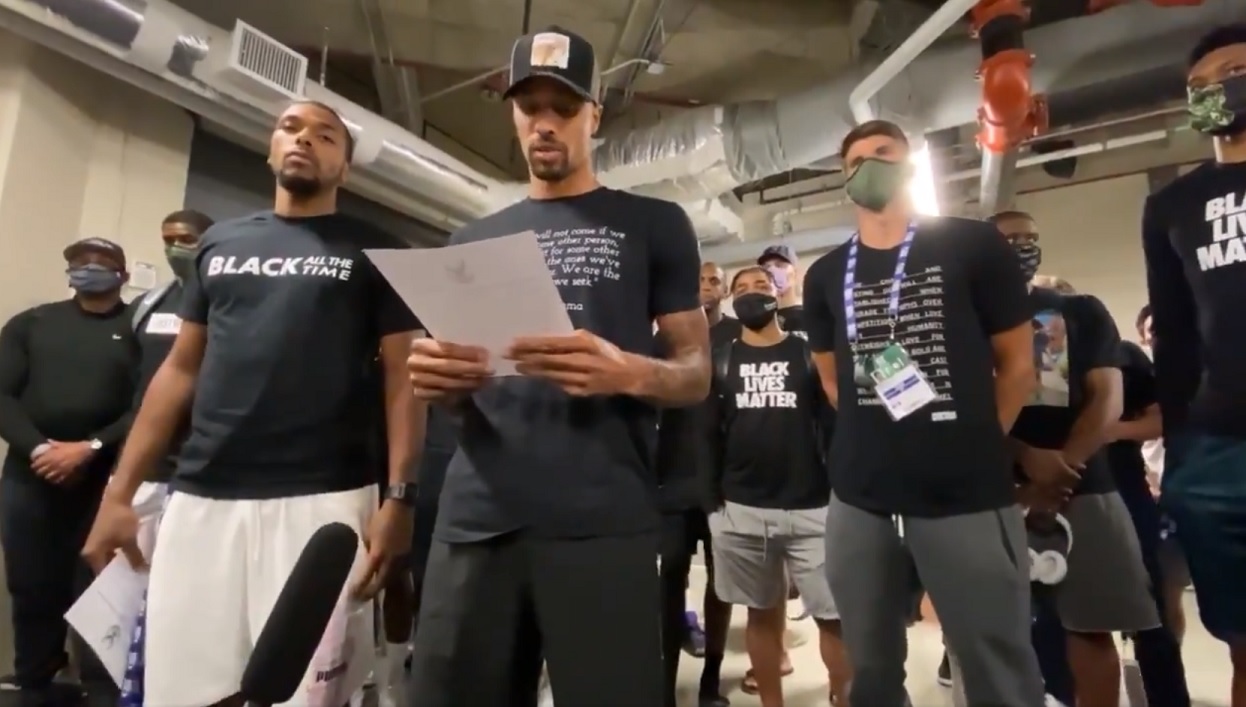 LeBron James called a prosecutor’s decision not to file charges against a white police officer who shot a Black man in Wisconsin this summer a “blow to the heart and to the gut.”

Back in Wisconsin, the Marquette men’s basketball team wore black uniforms to protest the decision, and the NBA’s Milwaukee Bucks said they plan to continue pushing for policy changes in law enforcement.

Jacob Blake, who is Black, was left paralyzed after being shot in the back on Aug. 23 by Kenosha police officer Rusten Sheskey, who is white.

The Bucks — who share Fiserv Forum with Marquette about 40 miles north of Kenosha — sat out an August first-round playoff game to protest the shooting.

That led the NBA to postpone all games that day, and player-driven protests also led to postponements in the WNBA and Major League Baseball.

“I’m smart enough to know that even though we are playing a game of basketball that there’s so much more going on in the world,” James said Tuesday after his Los Angeles Lakers won 94-92 over the Memphis Grizzlies. “So much more that’s even more important than us playing a game. To hear what happened in Kenosha today was a blow to the heart and to the gut, not only to that community, but to us and to every Black person that has been a part of this process, seeing these outcomes for so long.”

Kenosha County District Attorney Michael Graveley announced Tuesday that no charges would be filed because he couldn’t disprove Sheskey’s contention that he acted in self-defense out of fear that Blake would stab him.

“It keeps happening. It’s sad,” Los Angeles Clippers star Kawhi Leonard said. “Hopefully, in the future, we can get these guys to stop releasing fire on us. We got to change the people that are in the uniform.”

Marquette played its scheduled game Tuesday against UConn but said it was wearing black uniforms “in support of Jacob Blake, his family and the Kenosha community in reaction the announcement earlier today.”

“We were going to wear the black uniforms regardless of the situation, whether (Sheskey) got charged or not,” Marquette guard Koby McEwen said after the Golden Eagles’ 65-54 loss. “If he got charged, it was support of it. If justice wasn’t served, it was in protest of (the decision).”

“We are extremely disappointed in the decision involving Jacob’s shooting and we will continue to use our platform to advocate and fight for racial justice, “ Marquette said in a statement on the men’s basketball program’s Twitter account. “This is another reminder that just because racial and social injustice hasn’t received as much attention recently, doesn’t mean the need to fight against it has gone away.”

“Our guys obviously have been impacted by the events all around our country, but especially the Jacob Blake situation,” Marquette coach Steve Wojciechowski added. “They feel very passionate about it and they wanted to come together and make a statement.”

The Bucks, who weren’t playing Tuesday, issued a statement regarding their stand against excessive force by police without commenting specifically on Graveley’s decision.

“The Bucks organization remains firmly against excessive use of force by law enforcement,” the Bucks said. “This past year shed light on the ongoing racial injustices facing our African American and other marginalized communities. Reoccurring instances of excessive use of force and immediate escalation when engaging the Black community must stop.

“We will continue to work to enact policy change so these incidents no longer exist. As an organization, we remain strongly committed to address issues of social injustice and anti-racism and to make meaningful change for African Americans and all marginalized members of our community.”

“It really is disheartening,” Matthews said of the ruling. “But leaders have to be leaders and everybody has to take ownership for their own community.”

James said players also will maintain their efforts on behalf of social justice.