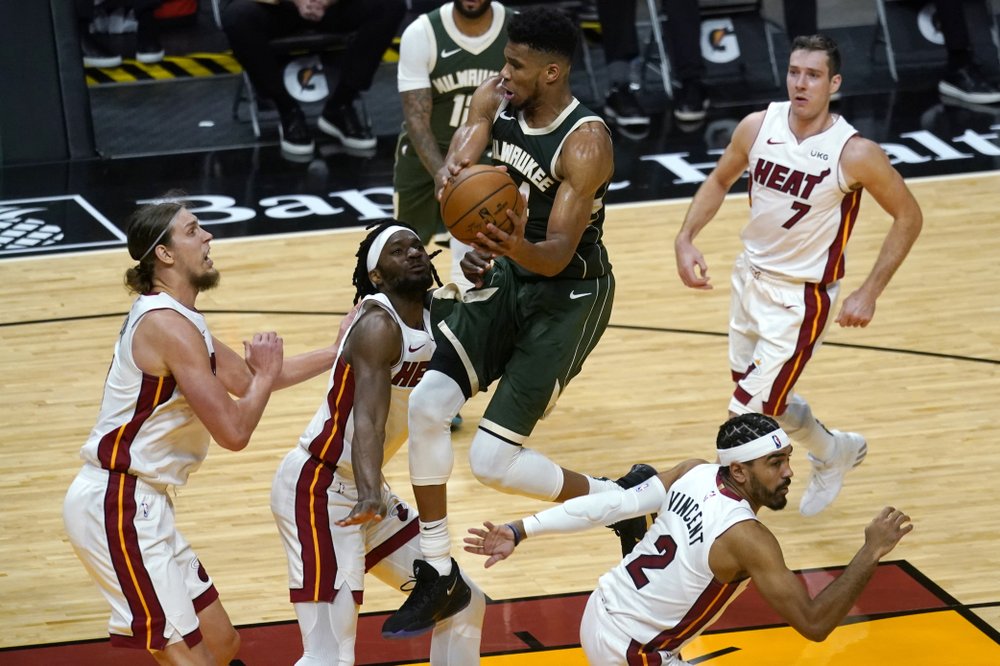 MIAMI (AP) — The Miami Heat engineered a 58-point turnaround against the Milwaukee Bucks in 24 hours.

And just like that, an embarrassing loss was avenged.

Goran Dragic scored 26 points off the bench, Bam Adebayo finished with 22 points, 10 assists and eight rebounds and the Heat beat the Bucks 119-108 on Wednesday night — one day after Milwaukee made an NBA-record 29 3-pointers on the way to a 47-point romp on Miami’s home floor.

Tyler Herro scored 21 points and grabbed a career-best 15 rebounds for Miami, which trailed by 14 early in the second half and rallied to get a split of the two-game, two-night series against the team that finished with the NBA’s best record in each of the past two regular seasons.

Giannis Antetokounmpo had a triple-double — 26 points, 13 rebounds, 10 assists — for the Bucks. Donte DiVincenzo scored 15 and Jrue Holiday 13 for Milwaukee, while Khris Middleton was held to eight on 3-for-15 shooting.

Avery Bradley scored 16 and Kelly Olynyk had 15 for Miami.

Milwaukee’s lead was 72-58 early in the second half, 84-73 with 3:44 left in the third. It was all Miami from there, with the Heat — who were without Jimmy Butler for a second straight game because of a sprained right ankle — outscoring the Bucks 40-15 over the next 12 minutes

Herro beat the third-quarter buzzer with a 3-pointer to get Miami within three, Dragic opened the final quarter with another 3 to tie it and the Heat, who trailed by as many as 51 on Tuesday, took the lead for good on a 3 by Olynyk with 9:04 left.

From the outset, it was nothing like Tuesday’s Milwaukee romp.

And eventually, the Heat found a way to end 2020 with a win.

Bucks: Brook Lopez, arguing that Adebayo flopped for a foul in the first half, theatrically fell to the court before Adebayo took the ensuing free throws. … Pat Connaughton scored 12 and Bobby Portis had 11 for Milwaukee.

Heat: Andre Iguodala got his first start as a member of the Heat, meaning for the 17th consecutive year — 2004 through 2020 — he has started at least one game. … Miami used 11 players in the first quarter alone.

The Heat have used four starting lineups in their first four games, a franchise first. The only other teams to use four lineups in four games this season: Cleveland and Minnesota. The Bucks have had the same starters in all five games.

0
0   0
previous Pick 4: INTs send Wisconsin past Wake in Duke’s Mayo Bowl
next WATCH: La Crosse's Jonathan Davis with the steal and the jam for the Badgers
Related Posts