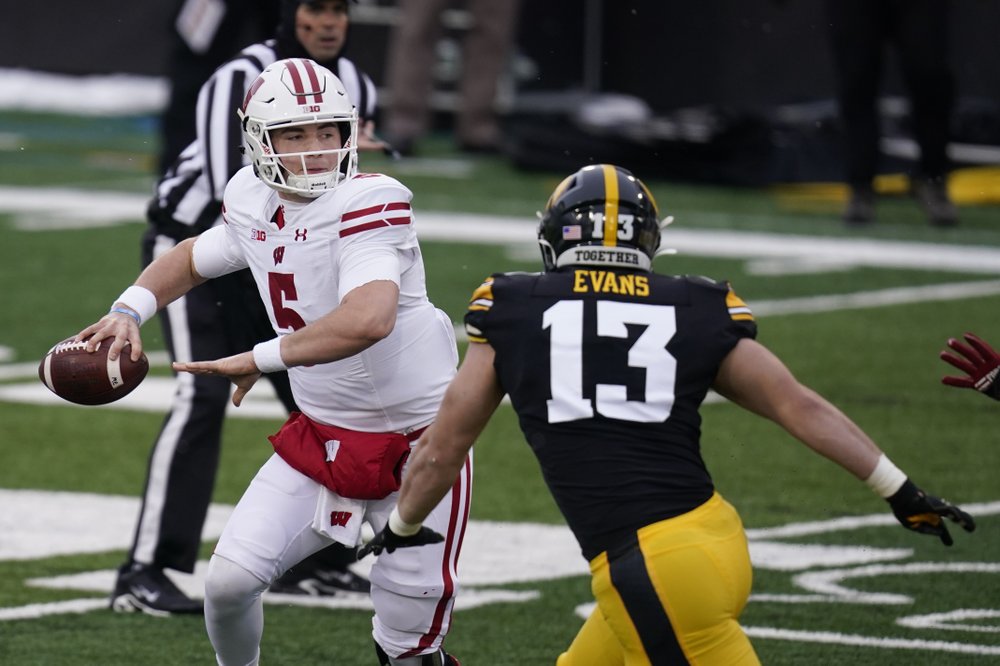 IOWA CITY, Iowa (AP) — As the snow accumulated in Kinnick Stadium, Iowa piled on the points.

The 19th-ranked Hawkeyes scored three touchdowns as the snow picked up in intensity in the second half Saturday, and they pulled away for a 28-7 victory over No. 25 Wisconsin.

“If I had my way, it would be 70 and sunny,” Iowa quarterback Spencer Petras said, laughing.

Petras, a California native, looked right at home in the flurries, throwing for 211 yards and two touchdowns, both to wideout Ihmir Smith-Marsette.

Iowa (6-2, 6-2 Big Ten) beat the Badgers (2-3, 2-3) for the first time since 2015 to reclaim the Heartland Trophy, celebrating afterward with snow angels on a field blanketed in white.

Petras found Smith-Marsette for 19-yard touchdown in the third quarter to give the Hawkeyes a 14-0 lead, but the Badgers answered. Wisconsin recovered a muffed punt, and a few plays later, Nakia Watson punched the ball in from the 1.

“Momentum is a really important thing in sports, especially in football,” Iowa coach Kirk Ferentz said. “No one’s going to hand it to you, especially against a team like Wisconsin. Somehow, someway, you have to get it going. Credit goes to our players. They didn’t get deterred.”

Petras connected with Smith-Marsette for a 53-yard touchdown to make it 21-7 late in the third.

“If you want to play man coverage against Ihmir, you’re going to get burned,” Petras said.

Wisconsin was still in position to come back in the middle of the fourth quarter when Iowa went three-and-out and Australian punter Tory Taylor, in his first year playing American football, mishandled the snap and kicked the ball while it was on the ground. That resulted in a penalty for illegal kicking, setting up the Badgers at the Iowa 5.

The Badgers went nowhere on three plays, and Graham Mertz flipped a pass into the end zone that Jack Campbell intercepted.

It was game over on the next play when Tyler Goodson broke an 80-yard touchdown run to make it 28-7.

“After that, it was kind of history,” Badger defensive end Isaiahh Loudermilk said.

Smith-Marsette finished with seven catches for 140 yards, and Goodson had 106 yards rushing.

The Badgers gained just 225 total yards, 56 on the ground.

“We’ve got to find a way to get better, certainly individually as groups and as a team, to try to finish this thing out the right way,” Wisconsin coach Paul Chryst said.

Iowa’s defense came up with a pair of big stops in the fourth quarter. The Hawkeyes got the ball back on downs after the Badgers marched to the Iowa 19. Then, taking over at the Iowa 5, Mertz threw the interception to Campbell.

“Our mindset after the (Wisconsin touchdown) was to go out and put out the fire,” Chauncy Golston said. “It ain’t done. We knew coming into the game it was going to be a 60-minute game. We were just trying to get a stop.”

After the win, the Iowa players disclosed that Ferentz cried in the locker room.

“Those guys found a way to pry it out of me,” Ferentz said. “They’re pretty good at it.”

According to Ferentz, it was a cumulation of overcoming an 0-2 start, winning six straight, and the relief of passing all COVID-19 protocols to be able to play.

“It says a lot about our kids, the guys we get to work with,” he said.

Late in the fourth quarter, Kinnick Stadium blasted House of Pain’s “Jump Around,” referencing Wisconsin’s tradition in between the third and fourth quarters.

Iowa safety Dane Belton said the team played “Jump Around” all week to get into the right frame of mind.

“Throughout the week, they played the song to try to get us annoyed, so we didn’t want them to score,” he said. “Having that song played, knowing we’re winning and not on the other end, it just added to the energy.”

Iowa beat a Top 25 opponent for the first time this season and is poised to move up in the poll. Wisconsin will likely drop out of the rankings.

Iowa: The downfield passing game showed up with Petras’ career-long 53-yard pass to Smith-Marsette, who also had a 38-yard gain. Petras didn’t throw much in the second half, but he was effective when he did.

Wisconsin: Wisconsin’s offense continues to struggle. It has scored a combined 20 points in losing its last three games.

Wisconsin and Iowa both play Dec. 19 against Big Ten opponents to be announced Sunday.