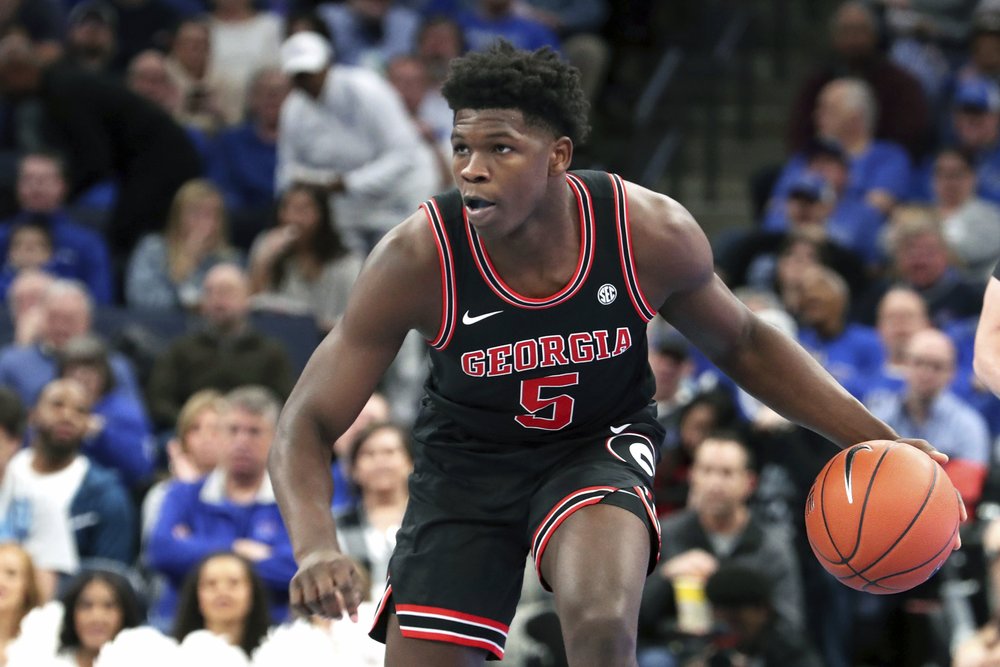 Minnesota selects Edwards with No. 1 pick in delayed NBA draft

Minnesota selects Edwards with No. 1 pick in delayed NBA draft

Tears flowed freely for those and many more players Wednesday night when their long-awaited, months-delayed NBA dreams were finally realized.

Edwards was taken by the Minnesota Timberwolves with the No. 1 pick in an NBA draft delayed multiple times because of the coronavirus pandemic.

Commissioner Adam Silver announced the pick from ESPN headquarters in Bristol, Connecticut. The draft was originally scheduled for June 25 before multiple delays caused by the virus pushed it back out and out of its usual home at Barclays Center in Brooklyn. Boxes of hats were shipped to the top prospects to put on the one they needed after their name was called.

Edwards watched while seated next to portraits of his late mother and grandmother. They both died of cancer and he was emotional after his name was announced.

“As far as just being excited and just being happy and ready to go and ready to work and ready to get there as soon as possible, those emotions were overwhelming with just my mother and grandmother being there,” Edwards said. “I mean, it was just a dream come true and just a blessing.”

And though there wasn’t the usual family table in the green room and trip on stage to meet the commissioner, some players still were outfitted in fashionable attire — perhaps none more than No. 12 pick Tyrese Haliburton of Sacramento, whose blue, floral suit had the words “Black Lives Matter” on the inside.

They celebrated with family, friends, coaches — and in Cole Anthony’s case, even celebrity fans. Movie director Spike Lee jumped up and down with his family when Orlando took Anthony, whose father, Greg played for the Knicks, at No. 15.

Some moments triggered deeper emotions. Okongwu, taken No. 6 by Atlanta, recalled his older brother, Nnamdi, who died after a skateboarding accident in 2014.

Toppin, the national player of the year last season at Dayton, struggled to speak after New York took him at No. 8, bringing the Brooklyn-born forward to his hometown.

Edwards became the 11th straight one-and-done player to be the No. 1 pick, coming in a year where there was no clear obvious choice. He averaged 19.1 points for the Bulldogs, tops among all freshman.

The Golden State Warriors, stung by the news that Klay Thompson sustained another leg injury earlier Wednesday, took Memphis center James Wiseman with the second pick. They stumbled to the bottom of the league while Thompson missed the entire season with a torn ACL in his left knee.

The severity of his injury had not been revealed as the draft began but it didn’t persuade the Warriors to take another guard. Instead they went with the 7-foot-1 center who arrived as the No. 1 recruit out of high school and averaged 19.7 points and 10.7 rebounds in three games before he was suspended for eligibility reasons and eventually left the program to prepare for the draft.

LaMelo Ball then went to the Charlotte Hornets, the next stop on a lengthy basketball journey that sent the guard from high school in California to stops as a professional in Lithuania and Australia. He joined brother Lonzo, taken No. 2 by the Lakers and now in New Orleans, to give the Balls two brothers taken in the top three picks.

After all his travels, Ball is eager to make a home playing for Michael Jordan’s team in Charlotte.

The newcomers will have precious little time to prepare for their debuts and need to knock off months of rust or more — Wiseman hasn’t played an organized game in a year — without the benefit of summer league. Training camps open in early December and the 72-game 2020-21 season is set to begin on Dec. 22.

“This draft process has been the longest for me, so I’ve just been working on my game,” Wiseman said. “I’ve actually been playing pickup games with pros already, so I’ve been getting a lot of experience. But really just focusing on myself. I’m truly ready to play with these great guys.”

Teams had to evaluate prospects without benefit of the usual draft combine in Chicago or the ability to invite them to their facilities for workouts and meetings. And with the coronavirus shutting down the sports world in March, there was no NCAA Tournament for the players to make a final impression before entering the draft.

That helped contribute to perhaps more questions than usual surrounding the draft, with little feel for how the top few picks would play out.

The Chicago Bulls took Patrick Williams of Florida State, the ACC sixth man of the year as a freshman, at No. 4. Cleveland followed with Auburn’s Isaac Okoro, another freshman, to round out the top five.

The latter half of the top 10 featured a couple highly regarded international players in France’s Killian Hayes, taken by Detroit at No. 7, and Deni Avdija, the highest player to come from Israel when Washington picked him at No. 9.

The setting wasn’t the only thing unusual about the draft. Duke didn’t have a player picked in the first round after having 39 since the league went to a two-round draft in 1989.

And the San Antonio Spurs picked in the lottery for the first time since 1997, when they drafted Tim Duncan No. 1. The Spurs picked Devin Vassell at No. 11, giving Florida State two first-round selections for just the second time in school history.

TOP PHOTO: FILE – In this Jan. 4, 2020, file photo, Georgia’s Anthony Edwards (5) looks to pass the ball during the second half of the team’s NCAA college basketball game against Memphis in Memphis, Tenn. The Minnesota Timberwolves selected Edwards with the first pick in the NBA draft Wednesday, Nov. 18. (AP Photo/Karen Pulfer Focht, File)