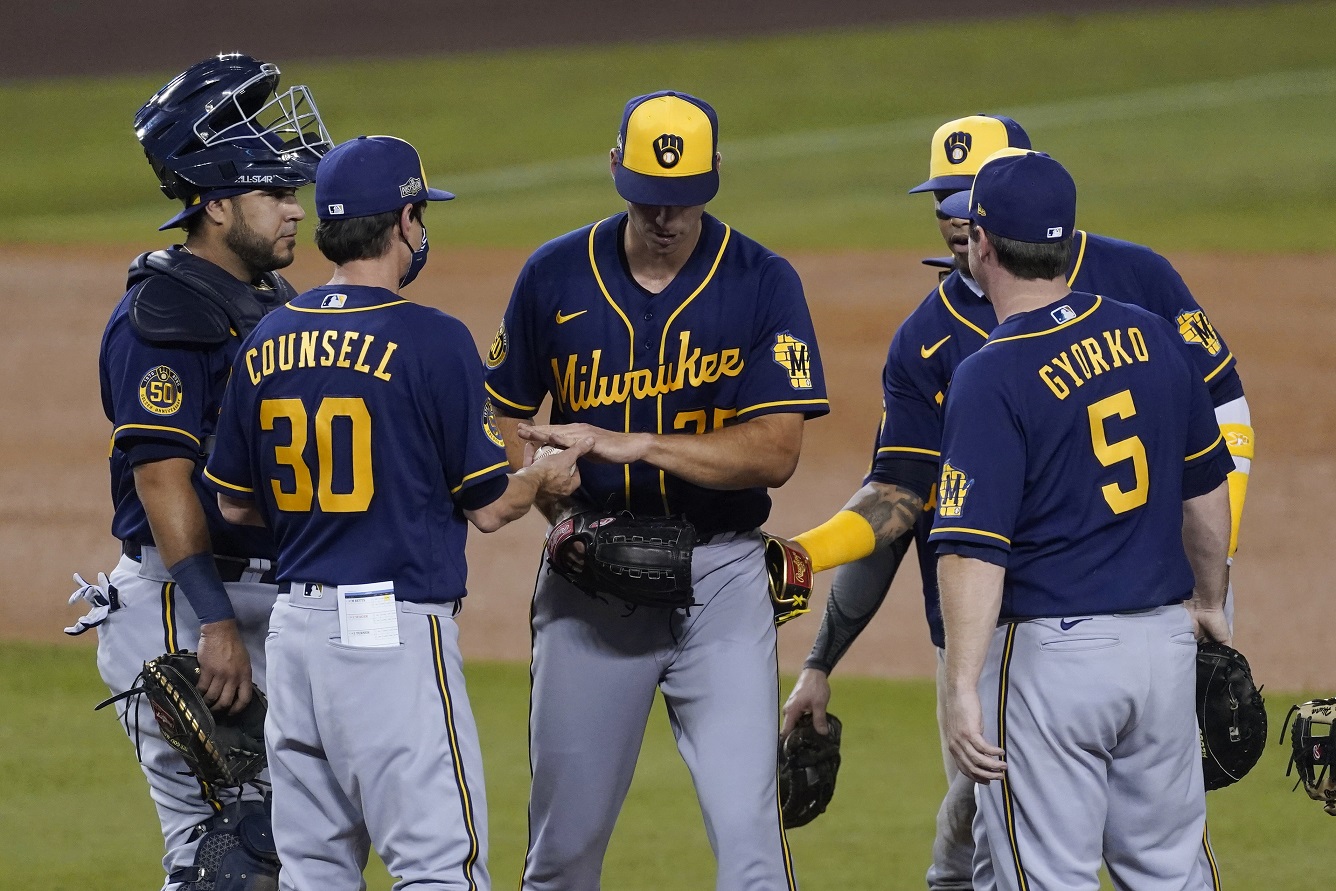 Mookie Betts had two hits and an RBI and Corey Seager homered in the Dodgers’ 4-2 victory in the opener of their NL playoff Wednesday night.

The eight-time NL West champion Dodgers capitalized early in a bullpen game for the Brewers and can wrap up the best-of-three series Thursday. Milwaukee — a playoff entrant despite a losing record — limped into the postseason as the No. 8 seed without its best starter and reliever, who are hurt.

“A walk is just as good as a hit sometimes, which we showed in the first inning,” Seager said. “You don’t always have to have the big hit to score runs.”

The Dodgers took a 2-0 lead on a leadoff double by Betts and four walks by left-hander Brent Suter in the first, tying for the most walks by a pitcher in a single inning in postseason history. Betts scored when Will Smith drew a four-pitch walk with the bases loaded. Seager walked and scored on AJ Pollock’s bases-loaded walk.

“We took our walks and scratched out some runs,” said Seager, who hit just behind Betts.

Suter needed 32 pitches to get out of the inning. He gave up three runs and three hits in 1 2/3 innings. He doubled his season total of five walks, and he didn’t record a strikeout.

“Nerves going on, excited to be out there, then Mookie gets that leadoff double. I missed some corners, then all of a sudden snowball effect,” Suter said. “I felt like I let the team down big-time.”

Chris Taylor doubled leading off the second and scored on Betts’ double, making it 3-0. Max Muncy walked with two outs and Ryan Braun caught Smith’s drive to right at the wall to end the inning, potentially saving three runs.

Braun winced as he hit the wall with his right shoulder. He left in the fifth with mid-back discomfort.

“He hurt himself Sunday in St. Louis and we tried to give it a shot today and at some point it was a no-go,” Brewers manager Craig Counsell said. “You could call it day-to-day.”

The Dodgers could have inflicted more damage but were just 1 for 7 with runners in scoring position in the first two innings.

With the Dodgers clinging to a one-run lead in the seventh, Seager went deep to straightaway center off Freddy Peralta, who gave up just two homers during the shortened 60-game season. The Dodgers led the majors with 118 homers.

Los Angeles closer Kenley Jansen walked pinch-hitter Jace Peterson with two outs in the ninth. Christian Yelich came to the plate as the potential tying run, but he struck out swinging to end the game. Jansen earned the save.

“Despite pitching about as bad as I’ve ever pitched, we still had a chance to win,” Suter said.

The Brewers closed to 3-2 on Orlando Arcia’s two-strike, two-run homer with two outs in the fourth. Betts made an over-the-shoulder catch to deny Avisail Garcia with a runner on for the second out of the inning.

Milwaukee had the potential tying run on in the seventh with Yelich’s two-out double. Tyrone Taylor popped up to end the inning.

The Brewers also threatened in the sixth. Garcia singled and was safe at second on Muncy’s fielding error at first base. Muncy turned and scrambled into short right, trying to pick up the ball with a swooping motion, but it went off his glove and rolled away.

Julio Urías retired the next two batters to end the inning.

“We gave ourselves a shot,” Counsell said. “We just didn’t come through.”

Urías got the victory, allowing three hits in three innings and striking out five. He had a runner on base in each of his innings, but didn’t allow a run.

Garcia had three hits and Yelich two to lead the Brewers.

Pitching with a blister on his right index finger, Walker Buehler allowed two runs and three hits in four innings for Los Angeles. He struck out eight and walked two.

Roberts pulled Buehler once he got over 20 pitches in the fourth.

“At that point in time is when the blister starts to show itself a little bit,” Roberts said. “We just didn’t know what we were going to get from Walker.”

Milwaukee right-hander Corbin Burnes and reliever Devin Williams are missing this series with injuries that occurred in the last week of the season. Burnes has a strained left oblique and Williams has a sore right shoulder. Starting pitcher Brett Anderson also was left off the roster because of a blister issue.

Losing Williams is a big blow after he emerged as one of baseball’s top relievers this season and is a top contender for NL Rookie of the Year. He went 4-1 with a 0.33 ERA and 53 strikeouts in 27 innings.

“It’s really crushing, honestly,” said Williams, who felt tightness after last weekend’s outing. “If we make it to the next round, I should be back. With the progress we’ve made in just a few days, it’s been encouraging.”

The Dodgers give the ball to left-hander Clayton Kershaw (6-2, 2.16 ERA) for Game 2 on Thursday. He’s 9-11 with a 4.43 ERA in the postseason and lost his lone start in last year’s NLDS. The Brewers start right-hander Brandon Woodruff, who was 3-5 with a 3.05 ERA during the shortened season. He came up big last weekend with 10 strikeouts over eight shutout innings in a must-win game that helped Milwaukee eke out the No. 8 playoff seed.