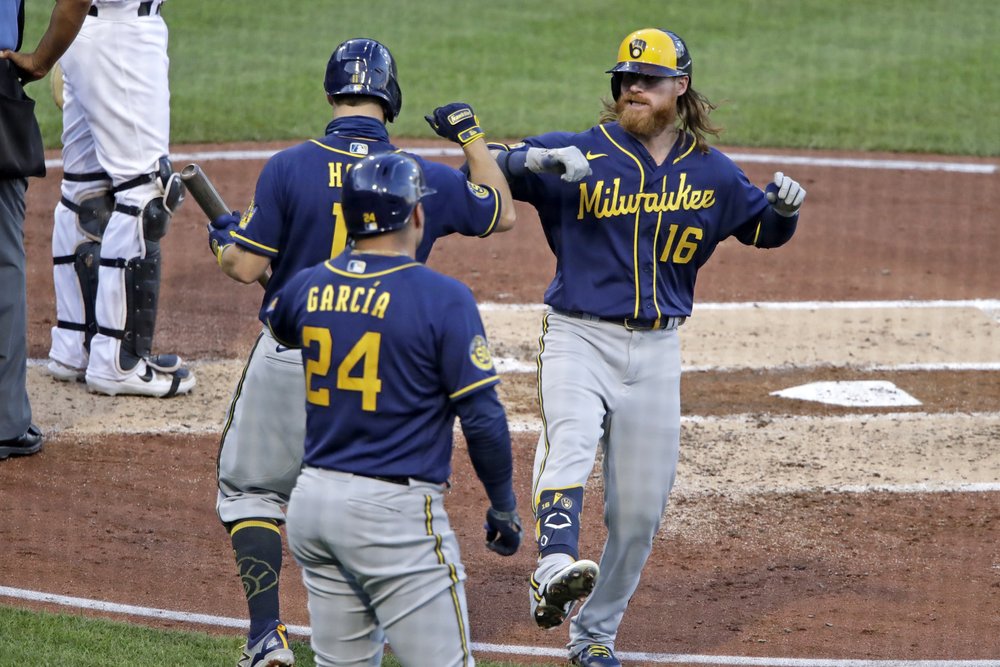 PITTSBURGH (AP) — Milwaukee’s Brandon Woodruff allowed one hit and struck out 10 while working into the seventh inning as the Brewers beat the struggling Pittsburgh Pirates 3-0 on Wednesday night.

Woodruff (1-1) retired 19 of 21 batters, allowing a swinging bunt single to Phil Evans in the first. Pittsburgh didn’t manage another baserunner until Evans walked leading off the seventh. Woodruff’s stuff was so overpowering the Pirates only hit one ball to the outfield during his 6 1/3 innings, a lazy flyball to left by Gregory Polanco in the fifth.

“I didn’t even realize it and then I thought back to the play where it was the grounder,” Woodruff said. “Maybe we can work on it and a little bit and see if we can get it changed. But I did not realize it. Yeah, it was just a good night. It was making some good pitches and trying to take it pitch to pitch tonight, and it worked out.”

Woodruff threw 92 of his 61 pitches for strikes against a lineup that is struggling to produce. Nine of his strikeouts came on swings and misses.

“He was brilliant, really,” Brewers manager Craig Counsell said. “Overpowering I think is probably the word that best describes it. It’s gotten to the point where the hitter has to respect the fastball so much that they’re cheating for a pitch, and (catcher) Omar (Narvaez) and Brandon were really on the same page tonight, and they were throwing a different pitch than what the hitter was looking for, and you saw a lot of swings where they missed by a lot, I guess is the best way to say it.”

The Pirates are hitting a majors-worst .171 during their 2-4 start.

“It’s not like he worked out of the zone at all,” Pittsburgh manager Derek Shelton said of Woodruff. “What did he walk, one guy? He walked Evans. That was it. The only thing you can try to do is break his rhythm. We tried to do that. He stood out there, waited for us to get back in the box and threw strikes.”

Ben Gamel gave Woodruff all the support he would need with a third-inning two-run homer over the right-field seats off Joe Musgrove (0-2). The ball clipped the top of a wall on the concourse. Otherwise, it likely would have ended up in the Allegheny River. Keston Hiura homered in the sixth for the Brewers. Hader worked a perfect ninth for his first save as Milwaukee finished its season-opening trip at 3-3.

“It sucks, you know?” Musgrove said. “But there’s plenty of pitches that Woodruff made tonight that I’m sure he saw as mistakes. We just didn’t hit them. Sometimes nights go like that. Sometimes you execute all your pitches and you give up six, seven runs. Sometimes you can’t hit a spot to save your life and you go scoreless. The game’s weird, man.”

Brewers: RHP Josh Lindblom felt well enough to get in a core workout on Wednesday, an encouraging sign after exiting his start on Tuesday night with what the team described as back cramps. Manager Craig Counsell expects Lindblom to make his next start as scheduled.

Pirates: The team will continue to monitor Polanco’s status following a COVID-19 scare earlier this month and a lengthy rehab from a left shoulder injury that cost him most of last season. Polanco made his first start in right field on Wednesday. He was a designated hitter in his season debut on Monday and served as a pinch hitter on Tuesday.

Brewers: Milwaukee returns to Miller Park for its home opener on Friday against St. Louis. RHP Brett Anderson will make his debut for the Brewers after missing opening day with a blister on his left index finger.

Pirates: Are off Thursday before heading to Chicago for three games against the Cubs. Trevor Williams (0-1, 7.36 ERA) will try to bounce back from a rough outing in St. Louis last week in his season debut. Williams is 3-6 with a 6.30 ERA in 11 career appearances versus Chicago.