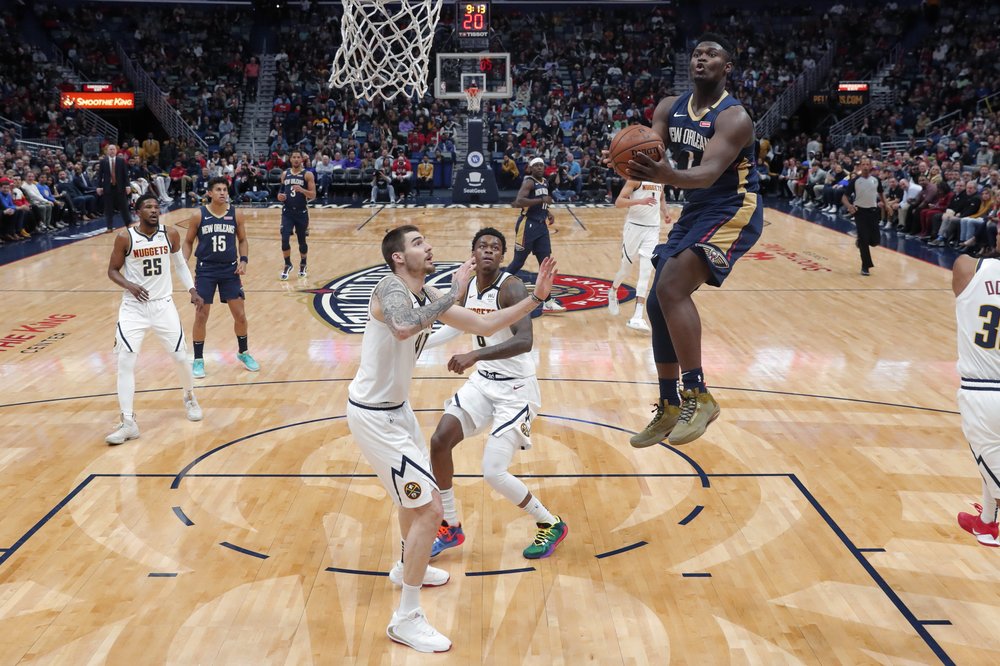 NEW ORLEANS (AP) — Zion Williamson’s crowd-pleasing array of soaring dunks, blocked shots and even 3-pointers during his first three NBA regular-season games have left the New Orleans Pelicans eager to see what he’ll do next.

In terms of the athleticism that has made the 6-foot-6, 285-pound Williamson an above-the-rim sensation since high school, he has not appeared limited since completing a carefully orchestrated three-month rehabilitation from arthroscopic knee surgery.

He has run the break to convert long alley-oop lobs into points. He’s jumped over defenders to slam home teammates’ misses. He has mostly looked comfortable finishing in traffic. But even when his close-range shots haven’t fallen, he has demonstrated an ability to suddenly and forcefully bounce back up to snag offensive rebounds and put them in.

“He can miss and catch it in the air and dunk it,” Pelicans guard Jrue Holiday said admiringly. “It’s God-given.”

The former Duke star and NBA’s top overall draft choice last summer also has shown flashes of playmaking ability on the defensive end, most notably when he sprung off the floor for a volleyball spike-type block into the stands during his second game.

“He did a good job of being low man and rotating out. You’ve seen that at Duke before,” Gentry said. “He’s very good at timing and blocking shots.”

“When you’re not able to move around, do athletic movements for a while, the only thing you can do is just shoot spot-up jumpers,” Williamson said. “I guess that was the result of that.”

The Pelicans’ caution with Williamson is evident in the relatively low number of minutes he has played. While he has started all three games, he has averaged just more than 22 minutes on the court. Nonetheless, he also has averaged 19.3 points per game — third on the team in that category behind only forward Brandon Ingram (25 ppg) and Holiday (19.8 ppg).

Williamson said he feels fine physically — no soreness and no limitations as it relates to jumping or quickness. But because he spent much of the past three months unable to run, he said his conditioning remains a work in progress.

“That’s the part that’s going to get better,” he said.

There were also moments when his chemistry with teammates was evidently off, resulting in turnovers or or other miscues that disrupted the flow of the offense.

“Some of it is timing,” Holiday said. “Obviously, he looks good with the tip-dunks off the rebounds and all that, but I think there was a couple times when (Lonzo Ball) drove and (Williamson) kind of cut too early, maybe sometimes he cut too late. I feel like that type of timing, maybe standing on the corner or positioning where he wants to be or where we’re going to find him —- where his sweet spot is. I think those little things over time, he will get a lot better.”

During his first two games — both Pelicans losses — Williamson played about five or so minutes to start each quarter and sat on the bench during the closing minutes.

But on Sunday against Boston, Williamson saw his first end-of-game action, scoring eight points in the final three minutes as New Orleans pulled away for the first victory with its rookie star in the lineup. The Pelicans play next on Tuesday night in Cleveland.

Gentry said it’s been tough to pull Williamson out of games when he’s infusing the team with energy and scoring, “but we’ve also got to be sensible in our whole approach to it and we’ve got to understand, as I said right from the start, we’ve got to think long-term here.”

But his minutes have gone up steadily. He played 27 minutes in his third game, and it might not be long before he crosses the 30-minute per game threshold.

“It’s definitely going to help us the more he can stay on the court and continue the chemistry,” Ball said. “It’s kind of hard to play when he just gets two minutes, three minutes, But when he’s out there for a while, we can get the pace going and keep stuff flowing.”