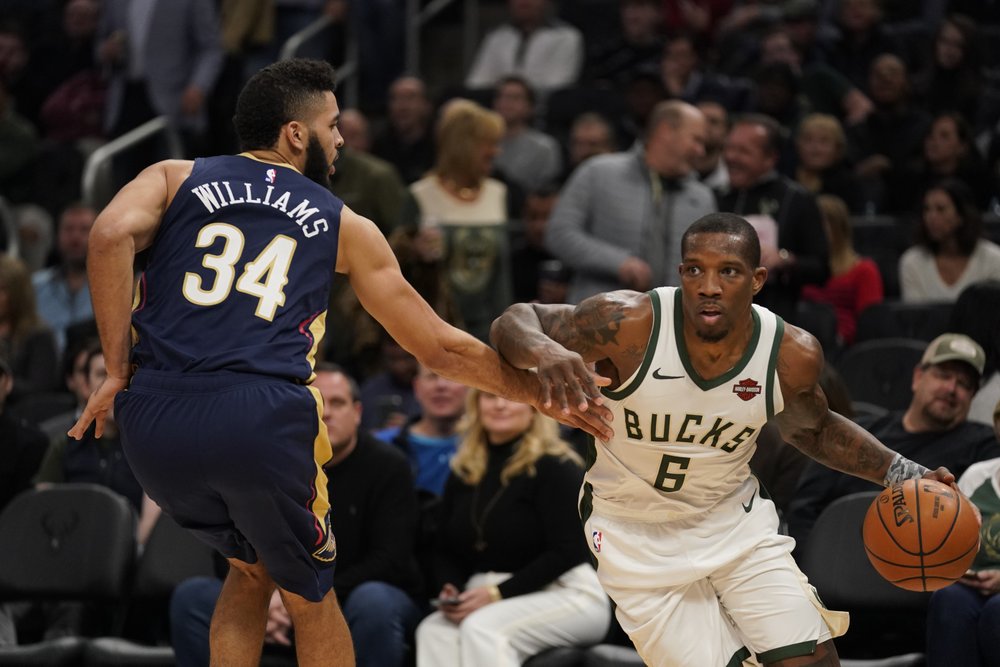 MILWAUKEE (AP) — No Giannis was no problem for the Milwaukee Bucks on Wednesday night.

Reigning league MVP Giannis Antetokounmpo sat out but the Bucks kept on rolling, getting 29 points from Eric Bledsoe and 24 from Khris Middleton in a 127-112 victory over the New Orleans Pelicans that extended their winning streak to 16 games.

The Bucks (22-3) tied the second-longest winning streak in franchise history and moved closer to the franchise record of 20 set during the team’s 1970-71 championship season.

Antetokounmpo sat out with a right quad tendon injury, missing his first game this season.

“I think we took a little more ownership of what’s going on out there,” Middleton said. “When Giannis is out there, he draws such a huge crowd that we play through him a lot. Without him tonight, we know we have to do a little bit more.

“It was a great test; they play with a fast pace just like us. I think we did a great job.”

Veteran forward Ersan Ilyasova, starting in place of Antetokounmpo, had a season-high 18 points and nine rebounds. George Hill contributed 13 points off the bench.

Bledsoe drove aggressively and scored 11 points in the third quarter to answer a Pelicans rally, and he finished making a season-high five 3-pointers and going 10 for 13 from the field while adding six assists.

“I try to get in the paint as much as possible,” Bledsoe said. “If I don’t have a shot, I kick it out to my teammates and trust them to make the right play.”

A frustrated Redick spoke up in the locker room at halftime, when New Orleans trailed by 23 points.

“It’s not like this is the first time we’ve had a talk at halftime,” Redick said. “I would say emotionally sometimes you reach a tipping point. That’s the timing of that.”

“It’s the quietest group I’ve ever been around, even on the plane and in the meal room,” Gentry said. “But we do have to get them talking on the court and have them communicate on the court.

“When we do, we’re pretty solid. I thought we did a good job in the second half of communicating. But when you’re trying to come back from 25 to-28-point deficits, the least little thing is going to have a glaring effect.”

The Bucks hit six of their first eight attempts from 3-point range, including 3 of 3 by Bledsoe, to take a 28-12 lead.

Milwaukee led by 23 points in the opening quarter before New Orleans closed the period on an 8-0 spurt to pull within 35-20.

The Bucks used a 17-0 run to grab a 56-28 lead in the second quarter before settling for a 69-46 halftime margin. Middleton and Bledsoe each had 13 points and Ilyasova and Hill added 11 apiece.

The Pelicans outscored the Bucks 40-36 in the third quarter.

New Orleans pulled within 120-108 with 2:51 remaining but Middleton hit a pair of jumpers to put the Bucks safely ahead.

Pelicans: New Orleans was coming off a two-point home loss to Detroit on Monday and has struggled without No. 1 overall draft pick Zion Williamson, who has missed the first 25 games of the season after undergoing surgery for a torn right lateral meniscus. “You either win or you learn,” Gentry said. “I think the guys are still playing hard. We just have these moments, these stretches where we struggle some and go away from what we’re doing.”

Bucks: Milwaukee won for the 20th time in its last 21 games and improved to 12-1 at home. The only loss at the Fiserv Forum came in the home opener against Miami. … The Bucks hit 19 of 39 attempts from 3-point range, one shy of their season high.

Antetokounmpo did not participate in the team’s shootaround on Wednesday morning and quickly was ruled out.

“I don’t think we know exactly when it happened,” Bucks coach Mike Budenholzer said. “This morning the soreness was such that he was not able to play tonight. The severity of it, we’re hoping it’s not too serious.

“We’ll take it day by day and we’re always going to err on the side of caution.”

Ilyasova, the 6-foot-8 veteran, made his first start of the season and responded with 8-of-10 shooting while drawing two offensive fouls and showing his usual energy.

“Ersan is in a great place,” Budenholzer said. “He’s making a lot of those feel plays, those rhythm plays. The offense is moving a little better recently and I think that suits Ersan. His ability to slip and roll in the pick-and-rolls and work behind the defense, he’s just a really smart player.”

UP NEXT
Pelicans: At Philadelphia on Friday.
Bucks: At Memphis on Friday.