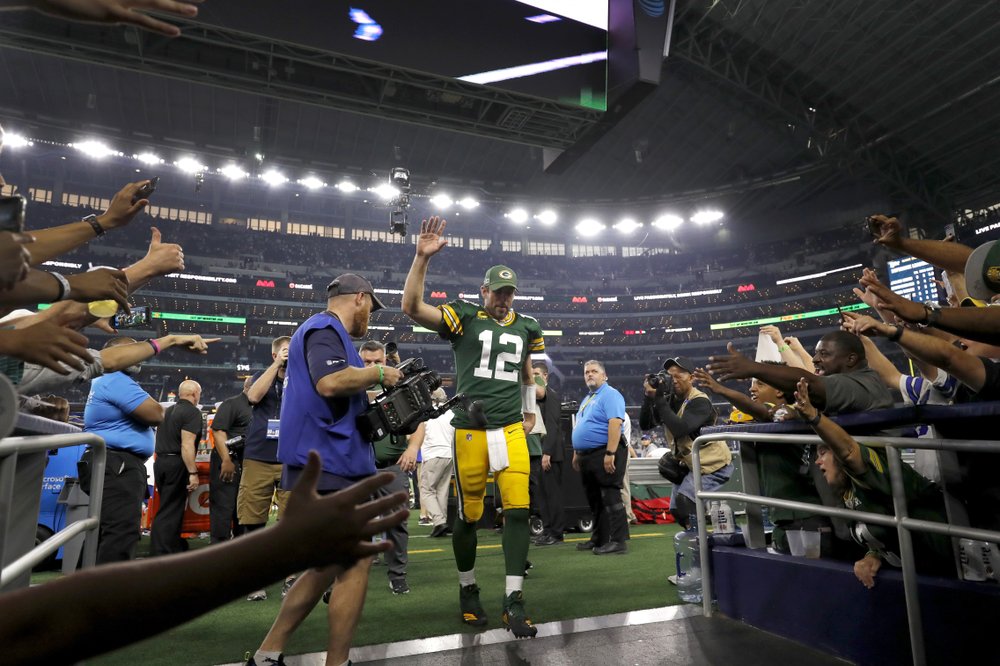 Growing up in Northern California, Rodgers would watch the long-running “Monday Night Football” games, hum the theme song and dream of being a part of the prime-time show.

Rodgers will take the prime-time “Monday Night Football” stage for the 16th time in his career when the Packers (4-1) face their NFC North division foe Detroit Lions (2-1-1) at Lambeau Field, where Green Bay has won six of its past eight Monday night games.

“It’s fun playing at home. Obviously, it’s better,” Rodgers said. “It’s long days Sunday and Monday, for sure, and a short week the following week, but it is always special to play on ‘Monday Night Football.’”

Rodgers has thrown for 300-plus yards and achieved a passer rating of at least 100 in four consecutive Monday night starts (all Packers wins). That’s the longest streak in the history of the “Monday Night Football” franchise.

In those four games, Rodgers has completed 66.0 percent of his passes, averaged 349.5 passing yards, and thrown 12 touchdowns against zero interceptions for a 120.1 passer rating.

But Rodgers is only 7-8 on “Monday Night Football” in his career and his 3-to-1 touchdown-to-interception ratio on Monday night lags far behind his career 4.25 mark.

“When you’re as old as I am and you’ve played in this league for so long, you really do enjoy the noon Sunday games,” said the 35-year-old quarterback. “Based on the schedule, it allows you to kind of get into a weekly rhythm.”

Rodgers will be without his top target in receiver Davante Adams, who will be inactive for the second straight week with a turf toe injury.

“We are really just trying to pace it at this point,” Adams said. “I can’t really tell you when I’m going to play. I don’t know. It doesn’t feel how I want it to feel at the moment.”

The good news for Rodgers is center Corey Linsley has cleared concussion protocol and is expected to play Monday. Linsley, who hasn’t missed a game since 2016, suffered a head injury last Sunday against the Dallas Cowboys. He left the game after only 18 snaps and didn’t return.

Green Bay has won four of its past five games on Monday night, with the one loss coming against the Lions on Nov. 6, 2017, at Lambeau. Brett Hundley was the Packers’ starting quarterback, as Rodgers was out with a broken collarbone.

The Packers will appear on “Monday Night Football” for the 27th consecutive season, the second-longest streak in the NFL behind only the Denver Broncos (28). But they will do it with a new head coach for the first time in a long time.

Green Bay is 32-32-1 in the regular season on “Monday Night Football,” but 0-0 on Monday night under first-year coach Matt LaFleur. The 39-year-old said he will rely on Rodgers when preparing for his first Monday night matchup.

“With a quarterback as experienced as we have, I definitely want to see what he sees on tape and what he’s comfortable with going into each game,” LaFleur said.

LaFleur said the offense has left a lot of plays and opportunities on the field this season. The Packers are averaging 23.8 points per game, but have scored 27-plus points in four of the past five “Monday Night Football” games.

Rodgers has been limited in practice this week with an injured knee. But injury or not, LaFleur said he’s not too worried about how the star quarterback will perform on the big stage.

“Yeah, I feel like our guy is pretty good,” LaFleur said.

0
0   0
previous Bucks improve to 4-0 with preseason win over Wizards
next Packers get the calls, Crosby hits late FG to beat Lions
Related Posts