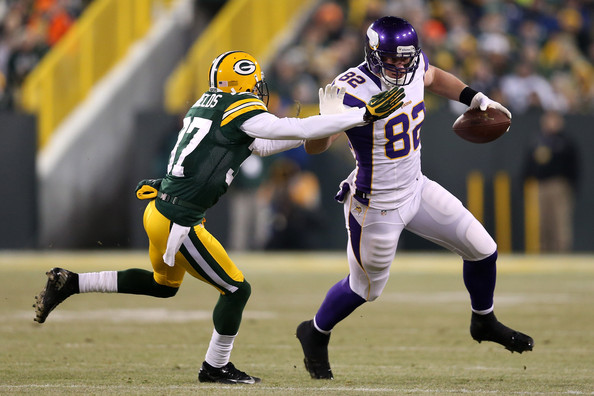 On and off field, Kyle Rudolph keeps giving value to Vikings

On and off field, Kyle Rudolph keeps giving value to Vikings

EAGAN, Minn. (AP) — Kyle Rudolph’s value to the Minnesota Vikings could easily be taken for granted at this stage of his career, given his streak of 61 consecutive games started that’s the longest active run by a tight end in the NFL.

Whether his contributions have been fully appreciated or not, Rudolph has continually carried a significant presence for the team on and off the field.

Three quarters of the way through the 2018 schedule, Rudolph is on pace for the second-most statistically productive season of his career with 46 receptions for 463 yards, trailing only 2016. His catch rate of 76.7 percent out of 60 targets is his highest since he was a second-round draft pick out of Notre Dame in 2011.

Rudolph’s durability is at the forefront of his player portfolio these days. Attitude, intelligence and awareness have long been cited as strengths by his coaches and teammates. But any evaluation of the 6-foot-6, 265-pound Rudolph inevitably circles back to those oven mitts he has long used to haul in all those passes in traffic.

“If the ball is in his general direction, he catches it. He brings it in one way or another, makes the tough catch,” quarterback Kirk Cousins said. “That’s a trait that I really appreciate. He’s proven it time and time again, so I’m excited to just continue to put the ball in his general area and let him bring it in.”

Rudolph collected only two receptions in each of the two games preceding the game against Green Bay on Nov. 25.

Coincidentally or not, the offense was ordinary at best on those days, a win against Detroit and a loss at Chicago. During the week leading up to the Packers game, Rudolph met with coach Mike Zimmer to air his concern, not out of self-importance but rather to reiterate his confidence in being able to help the team move the ball and score once it nears the end zone. Then Rudolph had seven catches by halftime, as the Vikings went on to beat Green Bay for their most important win in more than a month.

“I felt like I could help our team and it kind of clicked there,” Rudolph said.

“I still feel like I have a lot of football left in me, hopefully another 100,” Rudolph said.

Many families around the Minnesota area would sure appreciate that. Rudolph was announced on Thursday as the team’s nominee for the Walter Payton NFL Man of the Year Award for community service.

Rudolph and his wife, Jordan, have led and funded outreach at the University of Minnesota Masonic Children’s Hospital for sick kids enduring treatment. The Vikings produced a video celebrating the honor, featuring interviews with children, parents and staff who’ve been affected by his effort as well as an emotional Rudolph crying as he read their thank you letters to him.

You've seen what @KyleRudolph82 can do on the field.

But off the field?

He's touched more lives than you could ever imagine.#WPMOYChallenge Rudolph pic.twitter.com/iTqfY4TIas

0
0   0
previous Middling Minnesota: Vikings hit final stretch, not in stride
next Vikings offense continues to be missing in loss to Seattle
Related Posts