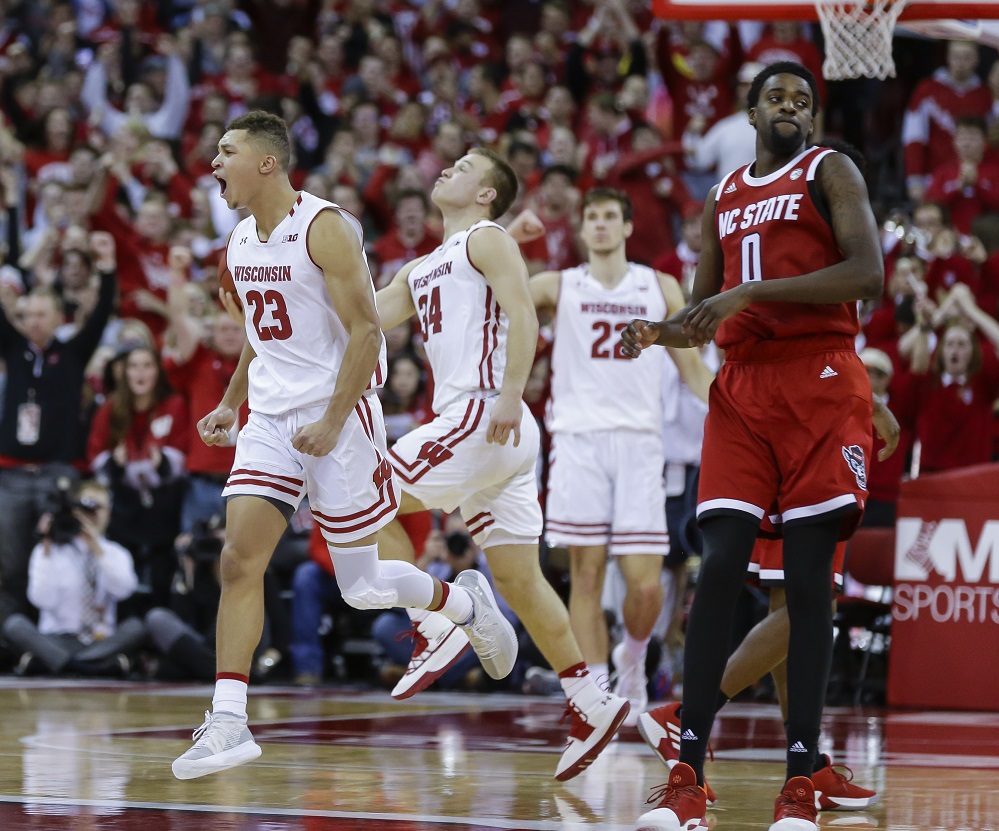 Wisconsin’s Brad Davison drew a charging call on Markell Johnson on the perimeter with 16 seconds left. The emotional Davison let out a furious yell and pumped his arms after forcing a critical turnover with the Wolfpack trailing by three.

Davison hit two foul shots with 8 seconds left for a four-point lead for Wisconsin (6-1), and a last-gasp 3-point try for the Wolfpack sailed harmlessly off the backboard at the other end.

La Crosse native Kobe King again played the most minutes off the bench for Wisconsin. In 30 minutes, the redshirt freshman scored five points, going 2-for-4 from the field, to go with six rebounds and two assists.

The Wolfpack controlled tempo for much of the game and answered nearly every run after Wisconsin fell behind 41-29 early in the second half.

The Badgers finally broke through in the end, with Happ leading the way in the paint.

They got boosts from the 3-point line from Trice, who had 18 points and went 4 of 5 from behind the arc; and Aleem Ford who had 12 points on four 3s.

N.C. State: The game had a choppy flow in the first half before opening up in the second. In between the whistles, the Wolfpack mostly dictated the pace with its man-to-man defense and occasional full-court pressures. Coach Kevin Keatts’ team had feasted on lower-division opponents in getting off to a 6-0 start, though a close loss to the Badgers on the road proved that the Wolfpack were on the right track. They forced 14 Wisconsin turnovers, seven in the first half, against a team that was averaging nine a game.

Wisconsin: Happ had some decent looks in traffic around the bucket but was just 3 of 11 from the field in the first half. The preseason All-American also found open shooters on the perimeter when he got doubled, but Brevin Pritzl and Ford missed a couple opportunities. Shooting improved in the second half, when the Badgers were 62 percent overall and 54 percent (6 of 11) from 3-point territory.

Wisconsin: Travels to No. 14 Iowa for Big Ten opener on Friday.

Badgers’ Mertz confident he can improve his consistency