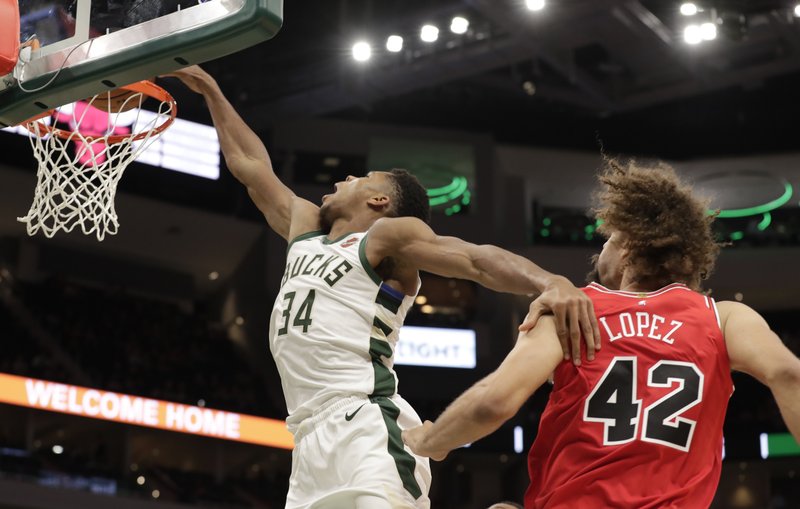 Giannis Antetokounmpo and the Milwaukee Bucks put on a smashing opening-night performance at their new arena.

Antetokounmpo had 19 points, 13 rebounds and five assists, and the Bucks routed the Chicago Bulls 116-82 on Wednesday night in the first game at the Fiserv Forum.

The Bucks had the look of contenders under new coach Mike Budenholzer, scoring 63 points in the first half of their preseason opener and leading by as much as 34 points.

Their new arena opened in August and the Bucks looked right at home there against the Bulls, overwhelming them on the backboards with a 64-43 rebound advantage.

BULLS: Jabari Parker was 1 of 12 from the field and scored two points in his return to Milwaukee, where the Bucks’ former No. 2 pick played his first four seasons. … No. 7 pick Wendell Carter Jr. had nine points on 4-of-8 shooting.

UP NEXT: The Bucks (1-0) play Minnesota at the Hilton Coliseum in Ames, Iowa, on Sunday. The Bulls (1-1) visit Charlotte on Monday.

Andre Drummond had 31 points and 16 rebounds, and scored the go-ahead points on a three-point play that gave visiting Detroit a 94-91 lead with 1:37 left. Ish Smith’s 3-pointer with 17 seconds left capped the scoring.

Stanley Johnson scored 10 of his 14 points in the first half for the Pistons.

PISTONS: Blake Griffin did not play. … Glen Robinson III had 11 points, and Reggie Bullock and Zaza Pachulia scored 10 each. … Dwane Casey made his debut as the Pistons’ head coach after seven seasons in Toronto, including a 59-win campaign in 2017-18.

THUNDER: Russell Westbrook and Paul George did not play. … Raymond Felton had 12 points on 5-of-14 shooting in 19 minutes.

UP NEXT: The Pistons (1-0) travel to San Antonio on Thursday. The Thunder (0-1) visit Minnesota on Friday.

Rookie Allonzo Trier scored 25 points, Enes Kanter had 22 points and 20 rebounds, and the Knicks took the first of two preseason meetings between the city rivals.

Caris LeVert scored 15 points for the Nets in their preseason opener.

The teams meet again at Madison Square Garden on Oct. 12 on the final night of preseason play.

KNICKS: New York closed the first half with a 24-6 burst, turning a 40-26 deficit into a 50-46 lead. … Rookie Mitchell Robinson limped to the locker room early in the fourth quarter with an apparent ankle injury. … Veteran Courtney Lee missed his second straight game with a strained neck.

NETS: Spencer Dinwiddie and rookie Rodions Kurucs each scored 13 points. … D’Angelo Russell had 11 points but shot just 4 for 12. … The Nets were 8 for 41 (19.5 percent) from 3-point range. DeMarre Carroll missed all four of his attempts in an overall 0-for-5, scoreless performance. … Brooklyn was without veteran forward Rondae Hollis-Jefferson (left abductor strain) and newcomers Shabazz Napier (strained right hamstring) and Kenneth Faried (sore left ankle).