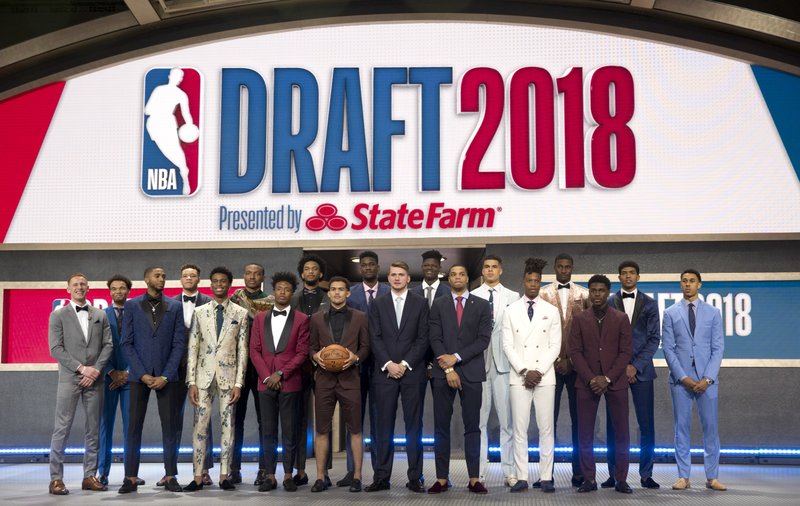 NEW YORK (AP) — The Phoenix Suns stayed close to home for their first No. 1 pick. The Dallas Mavericks looked all the way to Slovenia for the player they hope can be their next European superstar.

Shortly after the Suns took Deandre Ayton to start the NBA draft Thursday night, the Mavericks traded up two spots for the rights to Luka Doncic.

The Atlanta Hawks swapped the rights to Doncic, the No. 3 pick who has spent the last year winning championships all over Europe, to Atlanta for Trae Young, the No. 5 selection from Oklahoma.

The Mavericks also gave up a future first-round pick to draft Doncic, who only arrived in New York on Wednesday after helping Spain’s Real Madrid win its league championship after he won Euroleague MVP and Final Four MVP honors when they won that title this year.

His lengthy European season kept him from working out for teams but he knew the Mavericks were interested in having him on their team for what’s expected to be Dirk Nowitzki’s final NBA season.

“I’ve been talking to Dallas a lot. They really wanted me, and they were very, very nice,” the 19-year-old said. “They were very nice to me, and I think we had a very good relationship.”

The Hawks will get perhaps the most exciting player in college basketball last season in Young, the first player to lead the nation in scoring and assists in the same season.

“Whatever city I went to, I was going to be able to be comfortable in,” said Young, who wore suit shorts with his burgundy-colored jacket. “I was just really excited to get to Atlanta.”

After that, it was a mostly straightforward draft with little fireworks, but plenty of national champion Villanova Wildcats.

The top of it was dominated by big men, starting with a pair of former high school teammates.

The Suns made the 7-foot-1 Ayton the first No. 1 pick in franchise history. The center from Arizona averaged 20.1 points and 11.6 rebounds in his lone season in Tucson, tying for the national lead with 24 double-doubles in 35 games.

He joined Mychal Thompson — father of Golden State All-Star Klay Thompson — in 1978 as the only players from the Bahamas to be the No. 1 pick in the NBA draft.

“Having my name called to be the first pick for the Phoenix Suns was mind-blowing,” Ayton said. “Having all that confidence and leading up to that point when I saw Adam Silver came out, I was just waiting for my name, and when he called it, my mind went blank.”

The Sacramento Kings followed by taking Marvin Bagley III, the Duke big man who played with Ayton at Hillcrest Prep Academy in Phoenix in 2015-16.

With Michigan State’s Jaren Jackson Jr. going fourth to Memphis, Texas center Mo Bamba going No. 6 to Orlando and Wendell Carter Jr. following to Chicago, it was an early run of big men in what’s increasingly become a perimeter-based league.

Then it was another guard with Alabama’s Collin Sexton going at No. 8 to Cleveland, triggering chants of Michael Porter Jr.’s name by Knicks fans who hoped they would take him with the No. 9 pick. But they ended up disappointed as New York went with Kentucky’s Kevin Knox.

“They booed (Kristaps) Porzingis (on draft night) and look where he is now. That’s the same mindset I’m going to have,” Knox said. “They can chant Michael Porter all they want. But they got Kevin Knox, and I’m willing to work and I’m willing to get better.”

With concerns over back problems that limited him to only three games at Missouri last season, followed by a recent hip injury that he believe scared off teams, Porter ended up falling all the way to Denver at No. 14, the last lottery position.

There were a couple other trades involving lottery picks. Mikal Bridges, the No. 10 pick from Villanova who thought he was staying in Philadelphia with the 76ers — who employ his mother — but was dealt to Phoenix for the rights to No. 16 pick Zhaire Smith of Texas Tech and a 2012 first-round pick from the Miami Heat.

The Charlotte Hornets sent the rights to No. 11 pick Shai Gilgeous-Alexander — whose floral-patterned suit stood out among the selections — to the Clippers for No. 12 pick Miles Bridges and two future second-round picks.

After Bridges, Final Four Most Outstanding Player Donte DiVincenzo went to Milwaukee at No. 17 and Omari Spellman to Atlanta at No. 30, giving Villanova three first-round picks for the first time. National player of the year Jalen Brunson then was picked by Dallas with the third pick of the second round.

The Holiday brothers had an NBA reunion when Aaron Holiday was taken at No. 23 by Indiana. Brothers Jrue and Justin already play in the league.

Speaking of brothers, Kostas Antetokounmpo of Dayton, brother of Bucks All-Star Giannis Antetokounmpo, was the 60th and final pick by Philadelphia. That marked the first time three international siblings were drafted into the NBA, as Thanasis Antetokounmpo was the No. 51 pick in 2014.

0
0   0
previous Celtics’ Irving coy on possible reunion with LeBron
next DiVincenzo can hook up dad, a Bucks fan, with new gear
Related Posts