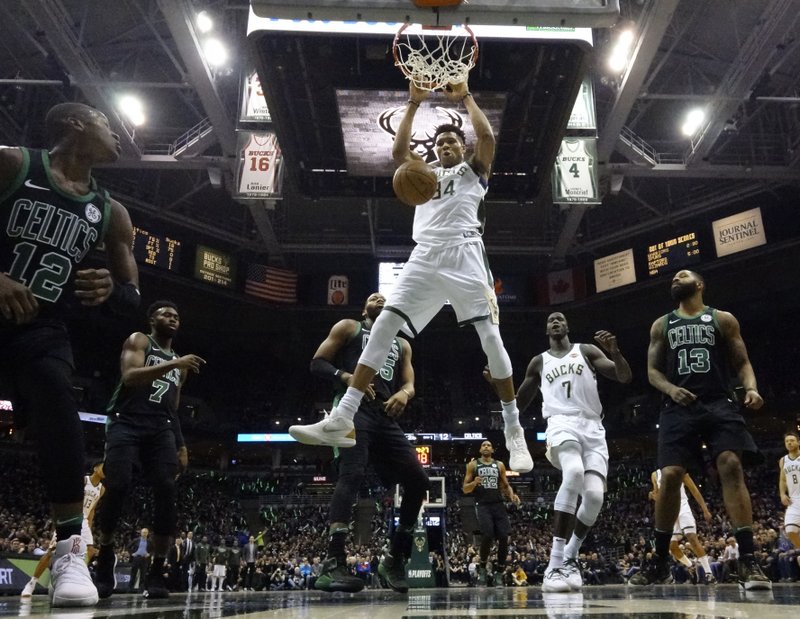 Tied up: Giannis’ tip-in lifts Bucks over Celtics in Game 4

Tied up: Giannis’ tip-in lifts Bucks over Celtics in Game 4

MILWAUKEE (AP) — After losing a 20-point lead to the Boston Celtics, the Milwaukee Bucks were determined not to lose another playoff game.

Leave it to All-Star forward Giannis Antetokounmpo to come up with a big play in the final seconds on Sunday.

Antetokounmpo scored 27 points, including tipping in the go-ahead basket with 5 seconds left, and the Bucks held on for a 104-102 win to tie their first-round playoff series at two games apiece.

Boston’s Marcus Morris missed a 14-footer at the buzzer with Khris Middleton’s hand in his face to seal a nail-biting win for the Bucks.

Seconds earlier, the 6-foot-11 Antetokounmpo jumped and reached up with his left arm around Boston’s Jayson Tatum to put back Malcolm Brogdon’s missed layup for the game-winner.

Game 5 is Tuesday night in Boston.

Antetokounmpo added seven rebounds and five assists, while Middleton scored 23 points. The Bucks’ two best players were clutch in the closing seconds of a tense victory, another sign of maturity for the one of the league’s up-and-coming teams.

“One of the most important things that we can carry from this game moving forward is that we stayed disciplined and we trusted one another,” Antetokounmpo said.

It could just as easily have fallen apart for Milwaukee after losing a 20-point lead with 7:37 left in the third quarter.

He just couldn’t hold off Antetokounmpo on the other end for the decisive tip-in.

Milwaukee Bucks’ Khris Middleton shoots during the first half of Game 4 of an NBA basketball first-round playoff series against the Boston Celtics Sunday, April 22, 2018, in Milwaukee. (AP Photo/Morry Gash)

The disappointing end for the Celtics overshadowed their spirited rally from a 65-45 deficit. Play got chippy and the Celtics limited the Bucks’ transition game.

They came up one basket short at the end.

Antetokounmpo “made a great tip-in and he was battling for the ball. That’s what great players do,” coach Brad Stevens said.

Both teams traded clutch buckets down the stretch.

After Tatum’s long jumper, Brogdon hit a transition 3 from the corner for a 102-100 lead with 33 seconds left. Al Horford followed with two foul shots to tie the game at 102 with 29 seconds remaining.

They couldn’t send the game into overtime. Morris bent over in frustration near the Boston bench after his fadeaway hit the rim.

Celtics: Stevens kept his starting five intact after the team never recovered from a disastrous first quarter in Game 3. Stevens said he would likely only make a switch for matchup purposes. … Boston ended with a 43-36 edge on the boards. … Morris finished with 13 points and shot 4 of 14.

Bucks: Starting C John Henson missed a second straight game with a sore back. … The Bucks went with the same starting five as Game 3, with Zeller replacing Henson and Brogdon starting for Tony Snell. … Jabari Parker led a vigorous effort off the bench with 16 points and seven rebounds. Backup C Thon Maker blocked five shots and played most of the fourth quarter.

The Bucks’ reinvigorated bench outscored the Celtics’ reserves 31-15. Parker, in particular, gave the team a lift in the first half with perhaps his best defensive play of the year after forcing turnovers on two straight Boston possessions at one point.

The Bucks set a franchise playoff high with 14 blocks, eclipsing the previous high of 13 set in Game 3. The 7-foot-1 Maker has turned into disruptive presence after playing sparingly in the first two games. He’s getting extended minutes because Henson’s injury.

“Thon is playing extremely assertive. The blocked shots are going to stand out because that’s something somebody can see on the stat sheet,” Prunty said.

Game 5 is Tuesday at the TD Garden in Boston.