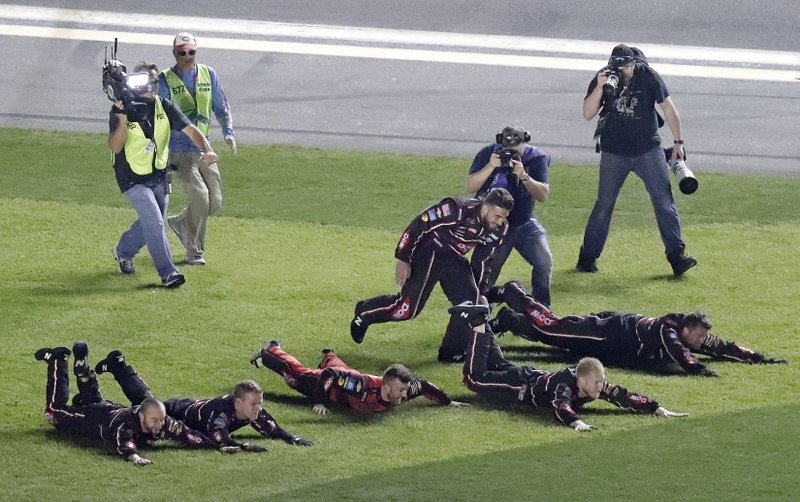 Column: NASCAR’s youth movement may be good for business

Column: NASCAR’s youth movement may be good for business

By JENNA FRYER, AP
DAYTONA BEACH, Fla. — Daytona Day was nothing short of a rousing success for NASCAR, which was able to celebrate both its storied past and youthful future on its biggest stage.

The Daytona 500 is the most important event of the year for NASCAR. With Austin Dillon’s victory in the famed No. 3 and Bubba Wallace’s history-making, second-place finish, NASCAR got perhaps its most promising glimpse to date of the next generation.

Dillon wrecked Aric Almirola on the final lap in overtime at Daytona International Speedway to drive the car owned by his grandfather, Richard Childress , back into victory lane 17 years to the day that Dale Earnhardt was killed in an accident on the final lap of the season opener. It came 20 years after Earnhardt’s only Daytona 500 victory, and in just the fifth appearance for the No. 3 in “The Great American Race” since Earnhardt’s death.

Dillon and much of his Richard Childress Racing crew celebrated into the wee hours Monday by getting tattoos, permanent ones, on their buttocks.

Wallace has rocketed to fame in the last month and won new fans following an emotional, post-race scene that included a long, tearful embrace with his mother that symbolized the struggles Wallace has faced on the road to NASCAR’s top series.

Baseball Hall of Famer Hank Aaron called him before the Daytona 500, and Lewis Hamilton, the only black driver in Formula One, tweeted he would be cheering for Wallace. When told about Hamilton’s well-wishes, Wallace admitted to “fan-girling out.”

“I look up to him. He does so many great things in the F1 world. … Then he sent out a tweet and I got weak at the knees,” Wallace said.

Wallace noted what the kind words from Aaron and Hamilton really mean for the sport.

“People are tuning in and hopefully noticing the new face and the new change that’s coming to NASCAR,” he said.

Wallace entered the season without sponsorship for the full season, but NASCAR Racing Experience announced Monday it would be the primary sponsor for the No. 43 Chevrolet this weekend at Atlanta Motor Speedway.

There has been much angst over NASCAR’s problems, and there are many issues, including the disappointing television rating for the Daytona 500. The 5.1 overnight for Fox was down 22 percent from last year.

It’s problematic, and NASCAR needs to find new reasons for fans to watch. There had been much hand-wringing over the retirements of Jeff Gordon, Tony Stewart, Dale Earnhardt Jr. and Danica Patrick , but it may have been unnecessary worry.

Why? Because their replacements are really racy and showed Sunday they aren’t content to simply turn laps in a pack, collect a paycheck and take a chartered flight home.

Wallace sparred with 2016 winner Denny Hamlin on the final lap, then criticized Hamlin afterward. Ryan Blaney led a race-high 118 laps and wrecked Kurt Busch, last year’s winner, trying to win the race. Chase Elliott was wrecked racing for points at the end of the first stage. Alex Bowman started from the pole and was the top Hendrick Motorsports driver.

All those drivers are under 30 years old and the future of the sport. If they race the rest of the season as they did at Daytona, the on-track product might actually be pretty good.

The changing of the guard was so palpable at Daytona that Dillon could feel the energy in the garage. Once awe-struck to be racing against his childhood heroes, Dillon is part of a new crop eager to spice up the series. Previously, he just wanted to stay out of the way of the veterans.

“I feel like a lot of these guys are coming in, we’re all going to start trying to be ourselves because the people that led our sport for so long have kind of moved out,” Dillon said. “It definitely feels good to have Bubba and I up there and fighting. I think there’s going to be some great battles this year with all the young guys.

“There’s going to be storylines, and the NASCAR fans are going to love what they see.”