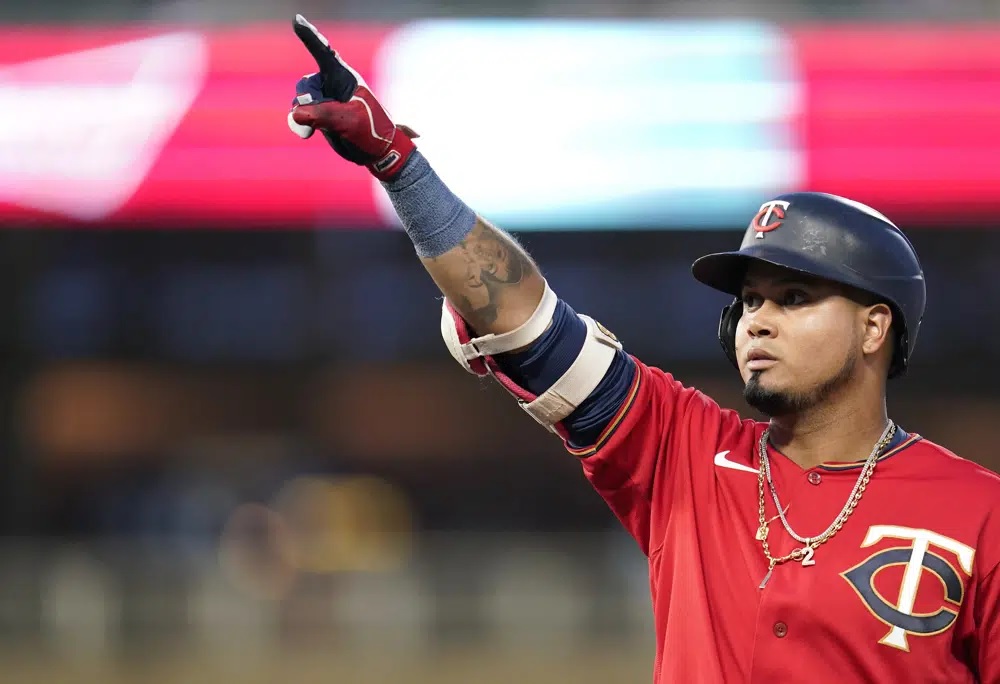 MINNEAPOLIS (AP) — Luis Arraez was taking a nap Friday after a workout when he got a call and was told the Minnesota Twins had traded him to the Miami Marlins.

“I was surprised,” he said, “but this is baseball. This is a business. I’m ready to go now. I’m a Marlin and I’m excited to be here.”

The Twins traded the reigning AL batting champion to the Marlins for a three-player package featuring starting pitcher Pablo López.

López should bolster an already deep Twins rotation, albeit one that’s absent a true ace. He’ll slot in with Sonny Gray, Tyler Mahle, Kenta Maeda, Joe Ryan and perhaps Bailey Ober. This has been an eventful month for the Twins, having re-signed shortstop Carlos Correa.

“I’m really excited about coming to this team, the leaders they have in the clubhouse and the players they have to support each other,” López said on a video interview with reporters. “It’s a mentality that really motivates me too. I ask and expect more of myself when it comes to my performance and the ways I can help out the team.”

The 25-year-old Arraez had a breakout season for Minnesota last year, making his first All-Star team while batting a league-best .316 and denying Aaron Judge a Triple Crown. The Yankees star led the AL in home runs and RBIs and finished five points behind Arraez in batting average.

MLB
New Zealand women, Argentina men win at Hamilton Sevens
Cueto’s Marlins’s deal allows him to earn $17.5M for 2 years
Mancini can earn up to $21M over 2 years in Cubs contract
Mancini, Cubs finalize $14 million, 2-year contract
Arraez is a multi-positional player who spent most of his time at first base for the Twins last year, starting 61 games there, 34 at designated hitter and 31 at second base. He has also played extensively at third base and left field.

Marlins general manager Kim Ng said Arraez is expected to play second base for Miami, and Jazz Chisolm Jr, who has mainly played second base during his major league career with the Marlins, will move to center field.

The Twins also received two prospects from the Marlins: infielder Jose Salas and outfielder Byron Chourio. The 19-year-old Salas, who finished last season with Miami’s high Class A affiliate, was picked as the organization’s fifth-best prospect in the most recent MLB Pipeline rankings. The 17-year-old Chourio, also a native of Venezuela, played in the Dominican Summer League last season after signing with the Marlins organization in June.

Arraez will give the Marlins three years of contract control. This is his first year of salary arbitration eligibility. He was the only Twins player who didn’t settle at the deadline last week, asking for $6.1 million in 2023 while the team offered $5 million.

The native of Venezuela became a fan favorite for his persistence and patience at the plate, as tough of an out as there has been in baseball in recent years with only 131 strikeouts in 1,569 career plate appearances. He has only 14 home runs over four seasons, but his career on-base percentage is .374.

Twins fans who are old enough might also have winced when the club traded reigning AL batting champion Rod Carew after the 1978 season, albeit with far different circumstances.

“Anytime you have a player that’s well liked in the environment, who you know is going to go work and do it every day which we got to see with Luis, it makes it harder,” Twins president of baseball operations Derek Falvey said. “We’d love to have Luis and Pablo on our team, but to get something as impactful as what Pablo brings to our team, you have to give something impactful.”

“When you trade anyone it’s always difficult, particularly when you’re talking about someone like Pablo,” Ng said. “Just a first-class guy, tremendous human being. He’s done a lot for the Marlins organization.”

Maeda, Gray, Mahle and Ryan were all acquired in recent trades, too, and whether minor-leaguers or major-leaguers the Twins have had to part with several valuable players to get them.

“I don’t care where they come from. We need really good starters and we need really good pitchers,” Falvey said. “The goal here is to continue to deepen your starting rotation and pitching staff however we can do it.”

Falvey listed Ober sixth when he mentioned the group in a video interview. He said the Twins have discussed a six-man rotation but weren’t “ready to stamp that yet.” Injuries ravaged the rotation last year, so chances are the Twins will need more than six starters over the course of 2023.

The deal makes sense for Miami, which has a strong pitching rotation highlighted by NL Cy Young Award winner Sandy Alcantara, and newly acquired right-hander Johnny Cueto. The Marlins struggled at the plate last season, though, batting .230 in 2022, and had been looking to add another hitter to their lineup after signing former Philadelphia infielder Jean Segura. Miami also recently traded shortstop Miguel Rojas to the Dodgers.

“We’ve talked about it quite often, wanting to add offense this offseason,” Ng said. “We’re willing to trade some of our pitching to do it. What we get in Luis Arraez is a left-handed, very good hitter.”