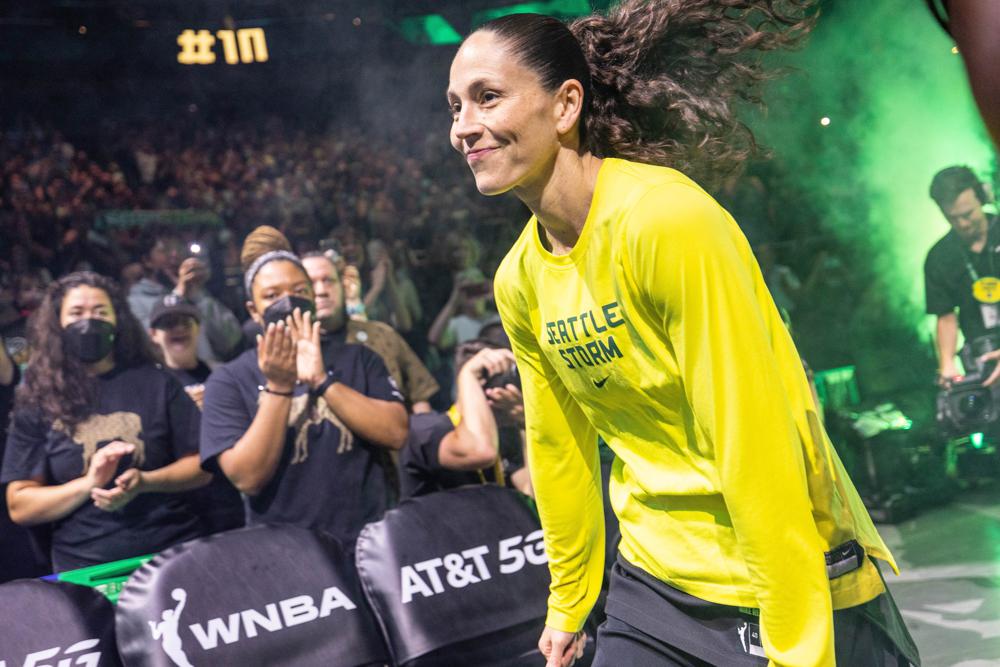 SEATTLE (AP) — Sue Bird was at the conclusion of her speech to the sold out crowd, nearly all of whom still remained, and decided — maybe hoped — this would not be the last time she would get to play in the city she’s called home the past two decades.

Bird and the Storm will be in Minneapolis on Friday to play the Minnesota Lynx.

“I don’t really have that ‘Mamba Out’ moment,” Bird said referencing Kobe Bryant’s retirement speech. “I just want to say I love you, thank you so much and I’ll see you in the playoffs.”

The day set aside to honor Bird and her career with the Seattle Storm was slightly soured when the Las Vegas Aces pulled away late for an 89-81 win on Sunday. A’ja Wilson scored 29 points and Kelsey Plum added 16 including a key 3-pointer in the final minute.

But the result didn’t take away from the three hours where Storm fans, WNBA fans and the city of Seattle said thank you to Bird for her career as the face of the franchise. The largest crowd in Storm history packed Climate Pledge Arena honor Bird for her career as one of the best women’s basketball players ever.

Bird said while the day was recognition of her, it was also recognition of the players and coach she played with through her career and the accomplishments of the franchise.

“I think today was yes, an honor in honor of me and people showed up, showed out for sure. It really was amazing,” Bird said. “But I think it’s really, truly a celebration of Storm basketball because I am kind of Storm basketball.”

Unfortunately for Bird and Seattle’s fans, the Aces weren’t willing to play their part. Wilson dominated the first three quarters, Chelsea Gray and Jackie Young both scored 15 and the Aces never trailed the final 28 minutes.

“I wasn’t trying to crash Sue’s party. She invited me,” Wilson joked.

Breanna Stewart finished with a season-high 35 points and Tina Charles added 19. Bird finished with nine points, six assists and four rebounds, but the result was much like the first game she played in Seattle 20 years ago — a defeat.

“I’m not going to lie, it kind of sucks to lose my last game. But you know what, I lost my first game too. So it’s OK,” Bird joked with the crowd after the final buzzer.

The outcome mattered and didn’t in the same breath. Both Seattle and Las Vegas were jockeying for playoff positioning, and for the Storm the loss was a knock to their chances of having home-court advantage in the first-round of the WNBA playoffs. The Aces locked up a top-four seed kept alive their hopes of catching Chicago for the No. 1 seed going into the final week.

But playoff position was entirely secondary to the focus of the day.

Bird is the WNBA record holder for assists and games played. Whenever this season ends, Bird will retire with five Olympic gold medals and at least four WNBA titles, to go along with the two championships she won at UConn.

“To be so good for so long,” said Las Vegas coach Becky Hammon, who was an opponent of Bird’s in her first WNBA game on May 30, 2002. “A lot of people you have nine to 10 years of being amazing. She’s been amazing for decades which is to me, remarkable.”

For the most part, Bird said she was able to keep emotions in check. She was surprised when leaving the locker room to take the court for pregame warmups and members of her family lined the hallway with fiancee Megan Rapinoe the final one in the receiving line.

An overwhelming wave seemed to hit her during a video tribute just before tipoff that included messages from Rapinoe, LeBron James, Russell Wilson, Chloe Kim, Lauren Jackson and Bird’s college coach Geno Auriemma, and roaring cheers from the 18,100 in attendance, the largest crowd ever for a Storm home game.

“We all know you’re not going away. I’m looking forward to what your next act is,” Auriemma said.

Bird said it felt a bit like a college senior night where all the ceremonies and emotional moments come pregame, “and then it’s like, ‘Oh, you gotta play this game.’”

“So in some weird way compartmentalizing this wasn’t that difficult,” Bird said. “Like a little moment where you glanced up at the jumbotron and it kind of all comes rushing back. But outside of a few moments feeling the emotions kind of build in those 40 minutes I didn’t really have to fight that off too hard.”

For now, Bird’s next act is trying to make sure the Storm play again on their home floor. Seattle is currently fourth in the standings and with the WNBA’s new playoff format, Seattle would end up hosting the first two games of its opening round series in the playoffs if it can hang on to that spot.

Seattle was without head coach Noelle Quinn after she tested positive for COVID-19 and was in the league’s health and safety protocols.

TOP PHOTO: Seattle Storm’s Sue Bird takes the floor for her regular season home finale prior to a WNBA basketball game against the Las Vegas Aces, Sunday, Aug. 7, 2022 at Climate Pledge Arena in Seattle. The largest crowd in Storm history packed Climate Pledge Arena to thank Bird for her two decades as the face of the franchise and one of the best women’s basketball players ever. (Dean Rutz/The Seattle Times via AP)