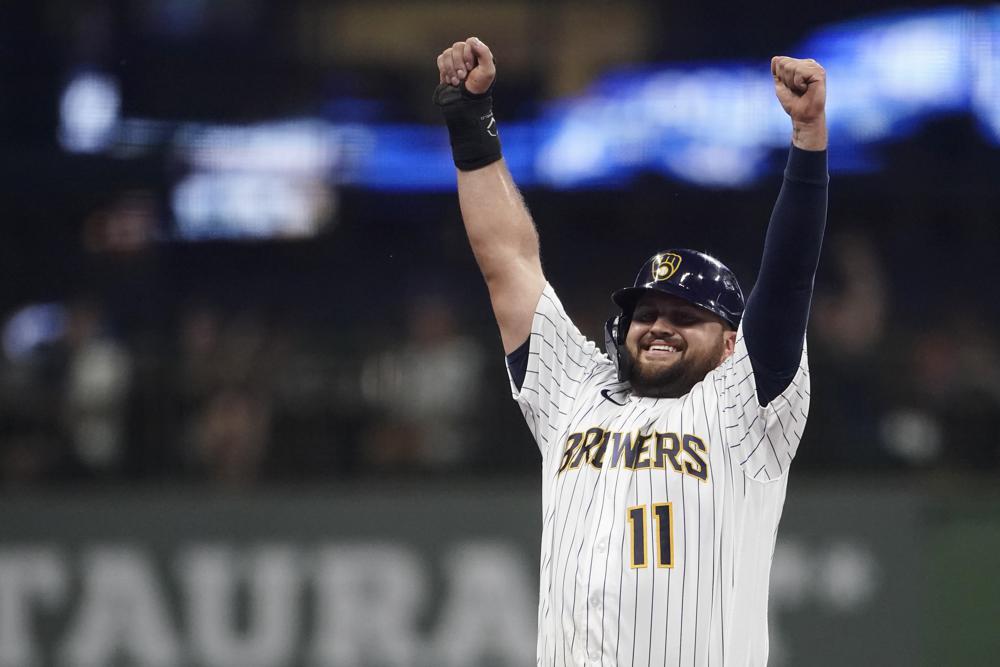 MILWAUKEE (AP) — Eric Lauer pitched seven strong innings, Rowdy Tellez and Tyrone Taylor homered, and the Milwaukee Brewers shook out of their post-trade deadline funk with a 5-1 win over the Cincinnati Reds on Friday night.

Tellez hit a two-run shot in the first inning off Robert Dugger (0-1), and Taylor followed with a three-run blast in the third.

Lauer (8-3) worked out of trouble early, loading the bases in the first and putting two aboard in each of the next two frames. But the Reds couldn’t cash in until Kyle Farmer’s RBI single in the fifth.

“It’s way nicer pitching with a lead, pitching when you’re out in front,” Lauer said. “You have some wiggle room. You can just go out there, pound the zone and really attack guys.”

Cincinnati threatened in the ninth, putting two on with one out against Trevor Gott. The Brewers then turned to Devin Williams, who fanned Matt Reynolds and Jonathan India for his seventh save of the season and his first since taking over for Hader.

“We were putting something together in the ninth but Williams came in and did a nice job,” Cincinnati manager David Bell said. “We just have to keep going.”

“Cost-cutting had absolutely nothing to do with this,” Attanasio said. “Every player that was available, we had the resources to pick up — not just for the balance of (this) season but for (any remaining) seasons on their contract.”

Stearns noted the Brewers’ payroll went up after he picked up reliever Trevor Rosenthal, and he was in talks about other deals.

“We were engaged with a number of players the day before the deadline and the day of the deadline that had we been able to pull off a deal, our payroll would have gone up even further,” Stearns said. “Ultimately, we didn’t make those deals because I made a decision that the talent asked was too high.”

The 40th anniversary of the Brewers’ only World Series title in 1982 was commemorated during a pregame ceremony. Hall of Famers Paul Molitor, Robin Yount and Rollie Fingers were in attendance.

“They’re just a unique bunch of guys, as a fan you form a bond with one of them, they’re your favorite,” Counsell said. “That’s what makes it last. They were a great baseball team, too, for a number of years.”

Reds: RHP Hunter Greene was placed on the 15-day injured list with a strained right shoulder, and reliever Ryan Hendrix was recalled from Triple-A Louisville. … RHP Jeff Hoffman (right forearm) was slated to throw a bullpen session Friday and could return to the team as early as next week. … RHP Art Warren (right flexor strain) is expected to start a minor-league rehab assignment sometime in the next few days.

TOP PHOTO: Milwaukee Brewers’ Rowdy Tellez gestures to the dugout after stealing second base during the third inning of the team’s baseball game against the Cincinnati Reds on Friday, Aug. 5, 2022, in Milwaukee. (AP Photo/Aaron Gash)

0
0   0
previous Bob Uecker on call, as Brewers head into matchup with the Reds on losing streak
next Savage injures hamstring during Packers’ ‘Family Night’
Related Posts